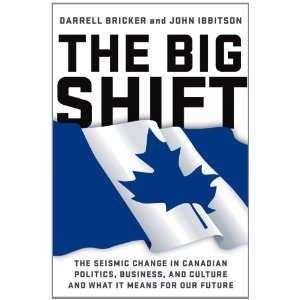 Recently, in teaching my first-year Canadian Studies course, I have used Bricker and Ibbitson’s The Big Shift as one of the required readings. It is an accessible account of current Canadian politics, and it has the advantage of having a strong (or at least a strongly argued) thesis. Few readers can finish the book without knowing precisely what the authors are arguing. Bricker and Ibbitson contend that a major, inexorable shift is underway in Canada due to enhanced migration flows into the country and within it, and Western Canada, particularly Alberta, will play key roles in the new Canada.

The old-style (i.e. post-1960s) “Laurentian elites” have had their day. Their obsession with Québec, bilingualism and the fragility of Canada is passé, and they cannot come to terms with the new thrust of Canadian politics: business-oriented, low tax, confident, Pacific-oriented, suburban. The new governing coalition links Western Canadians and suburban immigrants. For the authors, Canada will become an increasingly Conservative (and socially conservative) country. While they never predicted that one party would forever have a lock on power, they did believe that Stephen Harper’s Conservatives would win re-election. Their study is based on detailed polling and a deep understanding of political intrigue in Ottawa.

I find it enjoyable to use this book in teaching at Glendon College, York University’s bilingual campus. Established in the 1960s, there can be few better expressions of the “Laurentian consensus” than Glendon, a bilingual institution in the heart of Toronto, a campus established in the hope of forming a new generation of civil servants, especially for the diplomatic corps. To this day, one of our flagship undergraduate programmes is International Studies. In their diverse origins, Glendon students reflect Toronto as fully as their counterparts in other institutions in the city, but they have accepted on some level a key component of the Laurentian challenge: there is some usefulness in French-English bilingualism. (I specify the languages because so many of the students speak other languages already.) Bricker and Ibbitson’s analysis should challenge Glendon students to consider some of their assumptions about Canada.

It may be a bit premature to say that the recent federal election has refuted Bricker and Ibbitson’s thesis, though they clearly felt the need to reassert their argument by writing in the Globe & Mail recently that the political landscape has in fact changed, and that Canada has indeed become more conservative.

As politicians are wont to say publicly — even if they don’t believe it — there is only one poll that counts, and that is the one held on election day. Do the election results of 19 October provide support for Bricker and Ibbitson’s argument?

As they might be tempted to point out, the Liberal victory was no landslide. The Liberals received only 39.5% of the vote, almost exactly the same as the Conservative proportion in 2011. Whether either voting total should be able to produce a strong majority in the House of Commons is something for Canadians to consider carefully. Taking into account the increase in size of the House of Commons, the Liberals won the same proportion of seats as the Conservatives did four years earlier: 184 of 338 (54%) to the Conservatives’ 166 of 308. The recounts currently underway could shift the total slightly.

In their book, Bricker and Ibbitson placed a lot of emphasis on the new seats that were added to the House of Commons in this election, 30 new seats, mostly in the exact areas where they expected Conservatives to win seats: the fast-growing suburbs around Canada’s five major cities. Many of these suburbs have high percentages of immigrants.

So how did the parties fare in these new ridings?

The Liberals took 57% of the 30 new seats and the Conservatives 33% (both figures are slightly higher than the percentage of the seats the parties won nationwide). So this part of the Big Shift argument is not proved with these results. The fact that the Liberals captured almost all the suburban ridings outside of Toronto and Vancouver, including those with high immigrant populations, suggests that these groups were not as committed to the Conservatives as Bricker and Ibbitson predicted in 2012.

What about the campaign issues? In the aftermath of the election, a number of Conservatives have commented on how their party’s stance on the niqab ended up being a strategic error. In a strange echo of Trudeau’s strange echo of Wilfrid Laurier’s “sunny ways”, some leading Conservatives wish they could have presented a more positive image of their accomplishments. While every politician makes mistakes, it is impossible to believe that careful calculation did not lay behind the Conservative emphasis on the niqab and related issues.

Given the emphasis on the party leader throughout the campaign, why did the party make cabinet ministers Kellie Leitch and Chris Alexander taint themselves with the ill-conceived promise to set up a “Barbaric Practices Hot-line”? More significantly, why did not a single Conservative candidate distance herself from such odious policies? Even some NDP candidates found a way to voice their discomfort with their leader’s opposite, principled and perhaps vote-losing stance on the niqab issue.

One could argue that the Conservatives’ standpoint allowed them to increase their seat count in Québec to twelve – not something that Bricker and Ibbitson’s model suggests should have occurred. (One could argue equally that the desire to restrict women wearing the niqab delivered seats to the Bloc Québécois as well. But the vote total for the BQ actually fell in 2015: they received some 70,000 fewer votes than in 2011, when they only won four seats.) The Conservative vote only went up by about 80,000, and their percentage of the vote in Québec stayed almost the same.

Rather the unpredictable vote splitting in Québec produced strange results, even for our first-past-the-post practices: one Conservative candidate (Généreux) won with only 29.0% of the vote. Only six of the twelve winning Conservatives received more than 40% of the votes in their constituencies. Of course, other parties benefited from the vote splitting as well. My point is simply that at least six of the Conservative seats in 2015 involved very tenuous victories.

But the Conservatives needed to maintain a beachhead in Québec, and they were successful in doing so. Why else would the party have made the calculated decision to invoke the niqab and risk alienating the immigrant voters in the suburbs in other parts of the country, as they seem to have done? How deep does acceptance of multiculturalism run in the Conservative Party? It doesn’t take much digging to find that Stephen Harper ran for the Reform Party in 1993, at a time when the party opposed Sikh men wearing the turban as part of their ceremonial garb in the RCMP.[1] Surely it would be logical for many members of minority groups to fear that a negative focus on one group, such as the very small number of women who choose to wear the niqab in Canada, could influence majorities to criticize them for looking or acting “differently” than whatever group Harper meant when he spoke of “old-stock Canadians”[2] during one of the televised debates.

Moreover, while the Conservatives may wish to appeal to socially conservative electors, they have softened their stances on issues that they once held firmly. Harper spoke against same-sex marriages as recently as 2005, though in power he didn’t act on his promise to legislate “marriage as a union of one man and one woman.” And he refused steadfastly to legislate on abortion, to the chagrin of some of his caucus members. In fact, the Conservatives staunchly defended gay rights on the international scene, though it isn’t clear that this perspective plays to the new Conservative voters that Bricker and Ibbitson have detected. Indeed, the final thrust of the Conservatives’ 2015 campaign revolved around the issue of legalising marijuana and the shockingly spurious argument that the Liberal party would “force communities to accept brothels.” Could it be that the anti-marijuana vote is not as solid in the suburbs as the Conservatives thought?

One of the biggest lessons of the 2015 election has to be the changing size of the electorate. Almost three million more voters cast ballots in this election than the last. Is this the last gasp of Laurentian Canada? Bricker and Ibbitson seem to think so. They write on 28 October, “If the party takes its time and chooses its next leader wisely, without being distracted by nostalgists or narrow ideologues, the Conservatives will be very competitive in the next election and in elections to come.” The stunning acquiescence of Conservative candidates from coast-to-coast-to-coast in the ill-tempered tone of the Conservative campaign leaves me with less optimism than it does Bricker and Ibbitson.

But let me return to my initial point: I have used their book as a way of addressing current political issues in my Canadian Studies course. The fact that I don’t agree with all of it is not a problem. I think they have raised important issues that my students should consider. But is the analysis too dated now? One election does not disprove the argument behind the Big Shift, just at the election results stemming from the impact of the sponsorship scandal on the Paul Martin Liberals did not prove that the Canadian political spectrum had shifted forever to the right. (I had previously used Ibbitson’s earlier, pre-Harper government book, The Polite Revolution, which I also found very useful until it too became too dated.)

As much as I expect that I will disagree with their argument, I hope that Bricker and Ibbitson will write a new book. Like Paul Wells’ account of Stephen Harper’s politics,[3] they show that Harper appeals to an important component of the Canadian electorate. I am not convinced that this group is as dominant as they predict it is or will be, and a reform to the first-past-the-post system may actually reflect much better the fact that Canadians choose to parcel out their votes in a variety of ways, with a substantial minority – but a minority nonetheless – voting for parties to the right of the political spectrum.

Maybe for the moment at least, I’ll go back to teaching about the “Laurentian consensus.”

Colin Coates is a professor of Canadian Studies and History at York University’s Glendon College.

[1] “It never stopped John Diefenbaker” Globe and Mail, 14 September 1993. Sikh Canadian Conservative Tim Uppal served in the Harper cabinet, and he wore his turban. Had Harper come to accept on this matter a Laurentian consensus on multiculturalism?

[2] Likewise, Conservative candidate Jason Kenney praised the son of refugees for speaking “perfect, unaccented English”. It shouldn’t take training in sociolinguistics to recognise that everyone speaks with an accent. Yet this is a “common-sense” reaction that comes from the same source as the reference to “old-stock” Canadians. And it implies that accented English cannot be “perfect,” which surely must insult many immigrants.

One thought on “Is The Big Shift History?”