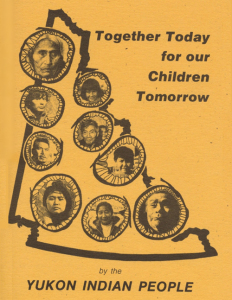 In 1973 when Chief Elijah Smith and a delegation of representatives from Yukon First Nations travelled from Whitehorse, Yukon, to Ottawa to present Prime Minister Pierre Trudeau with Together Today for our Children Tomorrow (TTFCT), they had my generation (and the many to follow) in mind: “This is a settlement for tomorrow, not for today…This settlement is for our children, our children’s children, for many generations to come.”[1] TTFCT, drafted by the Yukon Native Brotherhood on behalf of the “Yukon Indian People,” called for a “fair and just” settlement and spoke of our nations’ struggles with racist assimilationist policies, poverty, residential school, settler encroachment, dispossession, and unabated resource extraction that Indigenous northerners had been experiencing in our homelands for more than a century.[2] The document captured our desire, at the time, for redress, recognition (in the form of a legal “Settlement”), and a way of moving respectfully and responsibly toward a better future with Canada. In light of emerging critiques of Recognition Politics in Canada by Indigenous scholars, I explore the possibility of TTFCT taking on new meaning in resurgent Indigenous politics in the Yukon.

TTFCT had a profound effect on Indigenous-Canadian politics, at both the territorial and national level. Its presentation to Prime Minister Trudeau initiated our journey towards—what is now commonly known as—a “modern-day treaty” process, a form of political recognition. Political recognition seeks “acknowledgement of the existence, validity, or legality of something.”[3] An example would be a First Nation seeking recognition from Canada of its Aboriginal rights and title to land through modern-day treaty negotiations, comprehensive land claims agreements, self-government agreements, and/or through the courts.

By 1990, after arduous and costly negotiations, the Government of Canada, the Council of Yukon Indians (an off-shoot of the Yukon Native Brotherhood), and the Government of the Yukon signed the landmark Umbrella Final Agreement (UFA) in Whitehorse. Today, 11 of the 14 Yukon First Nations have negotiated and signed comprehensive land claims and self-government agreements under the UFA. They are self-governing and have “recognized” authority over their citizens and territories – the details of which are meticulously outlined and regulated in the agreements. Despite being 25 years on the other side of “Settlement,” our communities continue to grapple with many of the issues that TTFCT sought to redress.

Indigenous scholars have addressed the persistence of these struggles and draw our attention to the dangers and realities of Recognition Politics. Yellowknife Dene scholar Glen Coulthard maintains that “the politics of recognition in its contemporary liberal form promises to reproduce the very configurations of colonialist, racist, patriarchal state power that Indigenous peoples’ demands for recognition have historically sought to transcend.”[4] Chief Smith, the delegates that accompanied him, the 100 signatories of the TTFCT, and the countless “Yukon Indian People” that the document represented, had hoped for a “fair and just”[5] settlement in order to “help us and our children learn to live in a changing world.”[6]

Post-UFA and under the guise of self-government, colonialism looks different now. Assimilationist practices and dispossession are embedded within the very framework of the agreements. “Settlement” did not make colonialism go away, as we had hoped, it simply repackaged it. We are now grappling with a new, complex “field of power through which colonial relations are produced and maintained.”[7]

What are we—participants in this next generation of Indigenous Politics in the Yukon—to do with the political legacy we have inherited?

Drawing upon the work of Franz Fanon, Taiaiake Alfred and Leanne Simpson, Coulthard writes that Indigenous resurgent politics starts with turning away from the recognition approach.[8] In the Yukon, our relatives fiercely negotiated for agreements initiated by TTFCT. If we embrace the tactics that Coulthard and others so convincingly suggest, what exactly would we be turning towards? Simpson writes that resurgence “is a call for Indigenous Peoples to delve into their own culture’s stories, philosophies, theories and concepts to align themselves with processes and forces of regeneration, revitalization, remembering and visioning.”[9] Resurgent politics move us toward a radical alternative future; one that our ancestors will recognize. This raises the following question for us in the Yukon: what kind of future might we create if we prioritize the implementation of the agreements we have with our ancestors and our lands, rather than those we have with Canadian nation state?

There are stories, philosophies, theories and concepts of resurgence archived in TTFCT. Beyond the call for “Settlement” is our ancestors’ deep-seated desire to protect our land and our way of being, and to tell the truth about colonialism. To capture this, I created a “text collage” crafted through the collection of words and phrases directly from TTFCT. The words and phrases appear in the same order as they appeared in the text from pages five to forty. I use spacing, line breaks, symbols, strikethrough, and punctuation (or lack thereof) for added effect and emphasis. Collage, as an artistic practice and as theory, invites us to work with the contradictions and tensions in our political world in new and creative ways. It is being deployed here as one way of augmenting our current view of our political context in the Yukon. Collage helps bring seemingly unrelated pieces into new proximities to one another in a way that better reflect our needs, desires, and responsibilities as Indigenous peoples.

Together Today for our Children Tomorrow: a text collage

Yukon Indian People
Always live off the land
Keep the waters clear, the air pure and the land clean

They changed our way of life
Sixty thousand Whitemen

But we still do not completely accept your religion
We live by the sun, moon, and the seasons
Money alone is not enough for every person Indian OR White

Northern allowance, public school, title to a piece of land
All of these bribes
Discriminating laws
Back on the list

Over half our families are on welfare
Eighty percent

They are all salesmen
Brainwashed

Learn to live in a changing world

We will not sell our heritage
Quick buck/White solutions

The police, the welfare worker, the Indian agent
We have lived without these people breathing down our necks before

The whole Yukon is our school
Taught on the land
Not in Lower Post, B.C.

Implementation:
Expert help
Training courses
Money
Our problems are getting worse, not better
The first five years of implementation will tell

Money
It will be of only temporary help

Money must be…
Harmonious with our traditional way of life

Who will administer the land on behalf of the people?
Her Majesty the Queen?
This Ordinance?
Zoning?
Bylaws?
Local people?
The Central Indian Fund?
Senior Governments?
Indian Communities?
The Department of Indian Affairs?
Band Managers and Secretaries?
Urban Corporations?
Those who migrate?
Land Management?

(When we use the term
“Authority”
We mean
“Token”)

We do not feel we should be forced to move

We still think of the Yukon as OUR LAND

What would be fair and just?
We used to be independent and free
Born and raised on land that we always thought of as our land
These are not folk-tales

Lianne Marie Leda Charlie is Wolf Clan of the Tagé Cho Hudän (Big River People)—Northern Tutchone speaking people of the Yukon. She was raised by her mom, a second generation Canadian of Danish and Icelandic ancestry, on the unceded territories of the Lekwungen People in what is commonly known as Victoria, British Columbia. She is currently pursuing a PhD in Political Science in the Indigenous Politics Program at the University of Hawai`i at Mãnoa. You can see her collage artwork on Instagram: @littlesalmonwoman.

[1] The Yukon Indian People, Together Today for our Children Tomorrow, 17.

[9] Leanne Simpson, Dancing on our Turtle’s Back: Stories of Nishnaabeg Re-creation, Resurgence and a New Emergence (Winnipeg: Arbeiter Ring Pub., 2011): 148.