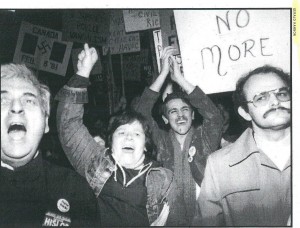 Last weekend, we learned that Prime Minister Justin Trudeau’s office is working to pardon Everett George Klippert, a man who was declared a “dangerous sexual offender” in 1965 for committing the crime of gross indecency,” the Criminal Code statute that outlawed gay sex. His conviction was upheld by the Supreme Court in 1967, and was met with criticism by Canadian politicians and the press. Weeks after that decision, then Justice Minister Pierre Trudeau famously declared, “there’s no place for the state in the bedrooms of the nation.” By 1969 these words were implemented into law, ensuring that no other gay man like Klippert would be arrested for having consensual gay sex with adults in a private environment. At least, this was the rhetoric.

Trudeau Sr. did not remove gross indecency from the Code, his government merely added a subsection to the law. This change, known as the ‘exception clause,’ meant that gay sex was still illegal in Canada, but it was permissible provided it happened under a strict set of circumstances. According to this exception clause, you were entitled to be ‘grossly indecent’ if the act occurred in private between consenting adults who were at least 21 years old, and provided only two people were present. We can conclude, then, that in 1969, the Liberals only partially decriminalized homosexuality.[1]

Gross indecency was not the only law left in tact that criminalized gay sex. The bawdy house law, like gross indecency, was part of the original Criminal Code of Canada from 1892, and was designed to prevent brothels and other spaces of commercial sex. However, during World War I, several establishments in major Canadian cities attempted to circumvent the law by advertising ‘massage’ services instead of explicit sex work. In 1917, the war-time government amended the bawdy house law to include not only places of prostitution, but establishments that allowed “acts of indecency.” In the mid-1970s police agencies in Montreal, Ottawa, and Toronto used this to conduct small-scale raids on gay bathhouses, not because of prostitution, but because of indecency.

More than a decade after Pierre Trudeau proclaimed that the state would not interfere in the sex lives of willing adults, Metro Toronto Police raided four of the city’s gay bathhouses. On February 5th, 1981, in an action dubbed “Operation Soap,” 150 police agents arrested 286 men, charging them with being “found in a common bawdy house,” with 30 owners and employees charged with “keeping a common bawdy house.” Gay bathhouses in the 1970s went beyond the confines of the 1969 gross indecency exclusion clause in one particular way: gay bathhouses facilitated sex when more than two people were present. These spaces were adult playgrounds. Amenities such as showers, saunas, winding corridors, and specifically-designated ‘dark rooms,’ meant that consenting adults were free to explore their sexuality with multiple anonymous partners, often at the same time. 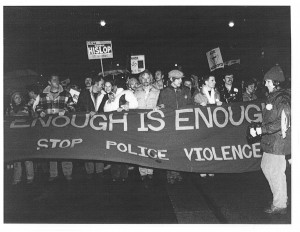 In the immediate aftermath of Operation Soap, Toronto’s emerging queer community rallied in opposition. The following night, 3,000 people participated in an angry march down Yonge Street, with a second, similar demonstration occurring two weeks later. After the protests, this anger was channelled into activism. Hundreds of volunteers joined a gay organization called the Right to Privacy Committee, which raised funds and hired gay-friendly lawyers. By the spring of 1982, it became evident that the defense tactics devised by the activists and lawyers were working. More than 90% of the found-ins from Operation Soap were either acquitted, or had their charges dropped.

For the rest of the found-ins and the keepers who were convicted, their legal penalties were light: in most cases it was a discharge, or a small fine. The real damage went far beyond the courtroom. For some, it meant the end of their marriage or relationship. For others, it meant the loss of their job. Some were forced to come out to their families or coworkers when they were not ready. Most were traumatized by the sudden interruption of their harmless sexual experimentation by police agents. For the community at large, it was a betrayal of the 1969 decriminalization.

Toronto Mayor John Tory has labelled the raids a “dark day in our history.” So with this discussion of granting a pardon to Klippert for gross indecency, shouldn’t we extend this to include those gay men convicted in the bath raids under the bawdy house law? In addition to this, I have two more suggestions for the Prime Minister:

Second, the Prime Minister should repeal the bawdy house law. In 2013, the Supreme Court of Canada ruled that the Code’s anti-prostitution measures deprived sex workers of their Charter right to security of the person. In late 2014, the previous Conservative government passed bill C-36, which removed the prostitution section of the law, but maintained the 1917 amendment that added “acts of indecency.” Under the Conservative Government’s definition, a bawdy house no longer means a brothel, it means a bathhouse. Having said that, courts do not interpret indecency in the same way as they did in 1981, so contemporary bathhouse aficionados need not worry.

This summer, Trudeau will be the first Prime Minister to march in Toronto’s pride parade. He will be marching down Yonge Street, just as LGBT activists did thirty-five years ago when they demanded that criminal laws used against the community be repealed. Perhaps he can take that experience back to Ottawa to finally deliver that change.

Tom Hooper is a PhD candidate in history at York University. His dissertation examines the community reaction to the 1981 Toronto bathhouse raids. He can be reached at: thooper@yorku.ca