By Gabriel Pizzorno and Heidi Tworek 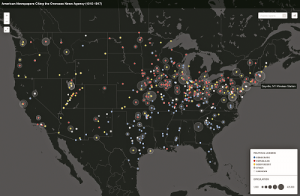 One truism about World War I is the incompetence of German propaganda in the United States. The classic stories feature German officials forgetting briefcases with secret documents on the New York subway and ham-fistedly delivering speeches about German culture. But what if we look beyond urban centers to examine the thousands of news items from a German news agency printed in American newspapers during the war? And what if we integrate students into this research adventure?

Over the past few years, the history department at Harvard University, where one of us teaches and the other has taught, has implemented an independent-study course, History Lab, that uses active learning to offer students hands-on experience in historical research and digital methods. Conceived by Dan Smail in 2013, the course addressed a long-standing desire among undergraduates to get involved in research. It also reflected growing faculty interest in applying digital methods and teaching these skills to history majors. Participating faculty propose research projects. Students register for a project and meet weekly with the faculty member; they receive ordinary course credit and must produce a final product (for example, an online exhibition or a visualization) comparable to a major term paper. They also consult regularly with the department’s digital historian, Gabe Pizzorno, who coordinates the methodological aspects common to all the projects.

Research papers and senior theses allow students to stumble on their own; History Lab uses the collaborative nature of digital scholarship to foster collective rather than individual learning.

As with any craft, students need practice and the opportunity to learn from their mistakes before they can acquire proficiency in transforming the raw materials of the past into new narrative forms. Research papers and senior theses allow students to stumble on their own; History Lab uses the collaborative nature of digital scholarship to foster collective rather than individual learning. The lab creates a safe, communal space where students can experiment and learn to embrace failure. It confronts them with the wild diversity of raw primary materials and teaches them how to forge the tools they will use to analyze their sources. The focus on digital methods enables students to collaborate easily on projects while gaining new skills.

History Lab offered four projects in spring 2015. Jill Lepore’s “The Dickens Log” created a relational database tracking Charles Dickens’s 1842 travels through the United States. Genevieve Clutario’s “Visualizing Colonial Philippines” developed an online archive of images of Filipino women during the American colonial period. Dimiter Angelov’s “The Byzantine Provinces” mapped views of Constantinople included in saints’ lives, letters, and sermons from the provinces between the 10th and the 12th centuries. Heidi Tworek’s “The History of News” explored the influence of German news sent by wireless to the United States during its years of neutrality in World War I. This project showed the promises and pitfalls of this pedagogical experiment and provides an excellent case study in how to structure a lab.

“The History of News”

This lab tested the prevalent scholarly narrative about the ineffectiveness of German propaganda in the United States. Participants examined digitized newspapers across the US to see what news from Germany was printed and where. The data amounted to hundreds of thousands of pages, making close-reading approaches infeasible.

In the first half of the semester, students learned how to download newspaper articles en masse from online archives and create a database to catalog them. Our sample consisted of over 11,000 articles, complete with associated PDFs. At least 5,000 had fully searchable text.

In the second half of the semester, each student chose to investigate one aspect of that dataset. Some used topic modeling to explore which subjects appeared most often. Others mapped the correlation between first- and second-generation German-Americans (about 9 percent of the US total in 1910) and the number of papers printing news from Germany. There were no predetermined tools or software. If students learned to use a particular tool, we wanted them to justify that choice methodologically within the context of historical inquiry.

Our class meetings often revolved around workshopping. The lab introduced students to the recursive process of formulating questions and finding ways to interrogate the data for answers, only to have to revise their questions or collect new data in response to problems. It encouraged reflection upon the research process itself and its inherent frustrations, such as the limits of sources, problems gathering data, and the difficulties of interpretation.

We embarked upon the projects with a sense of adventure. There were frequent roadblocks: literal ones, such as an online database banning us briefly for downloading too many articles by mistake, and figurative ones, particularly when students became frustrated with tools not designed for historical research. But the possibility of genuinely new discoveries pushed the work forward. The struggle, and occasional failure, to find solutions to research problems ultimately made the class more rewarding. It also encouraged the students to think critically about the issues surrounding digital methods (like copyright, uneven digitization of sources, and digital gatekeeping through paid subscriptions to databases).

Although the class was designed to be collaborative, students could have splintered into their individual projects after the initial, joint stages of work, yet they continued to act as teams. They often talked about how much they enjoyed conducting research as a group rather than alone, and several participants offered to continue with the project after the semester ended.

Perhaps the most challenging aspect of using digital methods is the initial investment of time and effort required for students to learn the basics of a particular technique. It is tempting to take a “tutorial” approach to solve this problem and offer students detailed, step-by-step instructions, but this can foster the very kind of passive learning we sought to avoid.

We decided to take a less prescriptive approach that focused on supervised exploration, serving as facilitators rather than top-down instructors. Often, students chose tools that we ourselves had not used and saw that we were learning alongside them. We helped them develop the skills they needed independently and intervened to solve problems only when they threatened to become more frustrating than educational.

The unconventional History Lab gave students many of the conventional skills that we historians hope to convey. In this sense the lab complemented existing tutorials on historical methods. It showed students how to devise a research project and pursue it independently. It taught them valuable research skills, both digital and analog.

The acquisition of skills is obviously difficult to assess. Student satisfaction was, however, very high. As instructors, we both received 4.88 out of 5. Beyond immediate student feedback, the most encouraging result was that some juniors intend to use digital tools for their senior theses. These students admitted that they would not have dared to learn these techniques by themselves but now feel emboldened to incorporate them.

The organization of the lab can prove challenging within the university infrastructure. While many tools are freely available, some require expensive software licenses. Others need servers to allow students to work on the same dataset simultaneously. Faculty would need to adjust their labs to their university’s willingness to support tools and purchase software licenses. Scalability is also a critical issue. One solution is to think about lab projects in a modular way. Heidi Tworek, now at the University of British Columbia, will include a lab module within a large introductory lecture course. Her exercise maps immigration to Canada from around the world. Each student will research a country and input the data. The class will then create a collective map that brings together the individual contributions to visualize immigration to Canada over time. Students could collaborate on particularly relevant countries, such as China or Great Britain, making the exercise suitable for up to 150 students.

By using the classroom to produce living knowledge, History Lab blurs the line between teaching and research. It allows students to engage with the messy process of historical research and digital scholarship. The experience gave students a look behind the scenes at how professional historians actually work, often stumbling through research, reaching dead ends, and figuring out how to resolve them or take the research in new directions. And it made students believe that they can create history too.

Gabriel Pizzorno is a lecturer on history at Harvard University. His research and teaching focuses on the history and archaeology of the ancient Mediterranean and the Near East, as well as digital scholarship and methods. Heidi Tworek is assistant professor of history at the University of British Columbia. She was previously a lecturer and assistant director of undergraduate studies in the history department at Harvard University.