The loss of a loved one during the First World War was often conveyed by a telegram beginning with the life-altering preamble, “Deeply regret to inform you….” This simple piece of paper heralded the deaths of sons, fathers, husbands, and brothers leaving families to pick up the pieces.  Rudyard Kipling, writing of the loss of his son Jack, who was killed on the Western Front in September 1915, captured the sentiments of parents everywhere:

The Trapp family of New Westminster, British Columbia knew the feeling of loss better than most.  Four Trapp sons went off to the First World War and only one returned.  Such terrible loss speaks to us when we look back at the war, but we should not give Kipling the last word.  In some cases comfort could be found, and for the Trapp family it came from Raymond Collishaw, one of the great aces over the Western Front, and a fellow British Columbian. 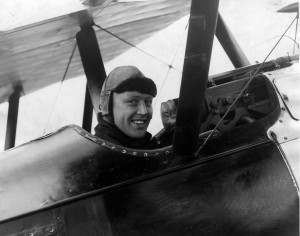 From Nanaimo, Collishaw, joined the Royal Naval Air Service (RNAS) in 1915 and served as a scout (fighter) pilot on the Western Front throughout the war. At a time when the life expectancy of the average British pilot was just 18 days, Collishaw defied the odds.[2] Over the course of two years of operational flying with six squadrons he was credited with 61 confirmed kills, making him the second leading British Empire ace behind fellow Canadian, William Avery “Billy” Bishop.[3] His success and longevity marked him as a competent commander and he was progressively promoted throughout the war. He commanded No. 3 Naval / No. 203 Royal Air Force (RAF) Squadron from January 1918 through the end of the fighting in November 1918.[4]

Following the end of hostilities, Collishaw opted to remain in uniform and fought in a number of small wars in the Middle East. One of his letters to Caroline Breadner, a woman he considered “my second mother” revealed the difficulties of serving away for home for so long.[5] Collishaw’s letter starts off very upbeat describing his experiences in Persia in the fall of 1920 and the winter of 1921 when the terrible weather and remote, difficult terrain were as much an enemy as the Bolsheviks they were fighting. Mesopotamia, or Mespot as it was called by British servicemen, primarily encompassed the area of the Tigris and Euphrates Rivers in what is now the modern state of Iraq. This area, formerly part of the Ottoman Empire, was a British mandate in the aftermath of the First World War. By May 1920 Britain had committed over 133,000 troops and four understrength RAF squadrons to the region to deal with a succession of small scale tribal clashes, insurrections and raids which threatened to explode into a general revolt.[6] 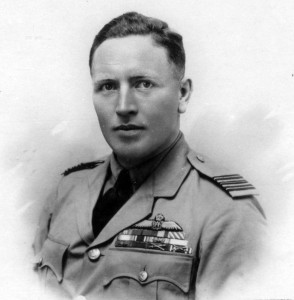 Collishaw in the early 1920s, when he was based in Baghdad.

Not surprisingly, Collishaw longed to return to England and Canada where he hoped that “some day I may be lucky” to marry Neita Trapp, “a girl you will love too.”[7] [We’ll return to her in a moment.] He then revealed the terrible cost of being so far from home:

With the mails just in to-day mother wrote about the death of my beloved youngster brother Clyde of pneumonia on the 28th of December last. Of course, I am astounded and it all seems a bad dream. It seems cruel to have the knowledge only after four and a half months. Clyde was a good lad and I bitterly regret his death. You may have heard me mention him to you as having been a midshipman in the navy. Mother is filled with grief and mourns his loss especially as she had reared him safely almost to manhood. Anyway, I am glad to remember as a brother that I knew Clyde to be innocent of shame and so can meet his God with a comparatively clear conscience.[8]

Not only did families have to deal with the distant loss of loved ones, but the men away from home sometimes faced the same hardships. They would learn of the tragedy weeks or months later and have none of the usual support in times of need. Collishaw’s extensive writings generally avoid any overt emotion, but this letter was written at a time when he was acutely homesick and had just learned about the death of his brother. It betrays the humanity of a man who made a point of always appearing carefree and jolly in front of his colleagues and men. He ended his letter by wishing he could visit Mrs. Breadner rather than spend more time in the “barren wastes.”[9]

That the loss of his brother was heartbreaking reminds us that grief still affected battle-hardened veterans. Collishaw was no stranger to death. During his time on the Western Front he lost many close friends as well as men under his command.  He was acutely aware of the burden of command and on his visits to Canada in 1917 and 1919 he made time to visit families who had lost sons during the war. In making these visits, Collishaw was “somewhat surprised to discover how bravely the parents bore their losses. In some cases the parents had relied upon the strength and services of the son to operate large farms and they could scarcely continue without him.” In spite of the terrible loss, he “never heard one word of regret or remorse at the loss sustained by the families … All these people showed nothing but family pride in the achievement of their sons, and I felt proud that I too was a Canadian with a splendid heritage.”[10]

A letter home, the typical duty of a commander in war, would have been sufficient, but it says much about Collishaw’s character that he took the time to visit these families personally to express his condolences and share their pain.[11]  Collishaw’s visits may have been part of his grieving process, but he clearly intended them to benefit families in some small way.  Perhaps they demonstrated to the families how important their sons were and brought them comfort.

During his leave in the late summer and early fall of 1917 Collishaw made his way from France to his home on Vancouver Island. Along the way he stopped in New Westminster, BC to pay his respects to the Trapp family. Thomas John Trapp and his wife Nell had a large family of eight children – four boys and four girls. All four sons were military aged during the First World War and enlisted for service. The oldest boy, Thomas, joined the 131st Battalion CEF and would eventually find his way to the Western Front where he was severely wounded and invalided home. The three younger sons would join the British flying services.

George Trapp was a squadron mate and good friend of Collishaw’s in No. 10 Squadron, Royal Naval Air Service. The experienced Collishaw had taken George under his wing when he joined No. 10 Naval. George’s older brother, Stanley, also an RNAS pilot, was killed in December 1916, bringing Collishaw to the Trapp home during his leave many months later. During this visit Collishaw met George’s sister, Juanita (Nieta), and they soon became friends. Collishaw recalled, “While visiting the family I met the two sisters, both lovely girls, and I was immediately taken by one of them, Neita. I returned to New Westminster during my leave and before I left for overseas we had become engaged.”[12] Some good had emerged from the loss of Stanley.

Unfortunately, tragedy was not yet finished with the Trapp family. George was killed in action while Collishaw was on leave in Canada. The youngest brother, Donovan, left the University of British Columbia and served as an engineer with First Canadian Division in France. Yearning to follow his brothers, he transferred the Royal Flying Corps and qualified as a pilot. He joined the illustrious No. 85 Squadron RAF commanded by aces Billy Bishop and Mick Mannock. On 18 July 1918 Donovan walked away after crashing his SE 5a while landing during a wind storm. The next day his luck ran out. He departed his aerodrome in the late afternoon and never returned. He was likely shot down and killed.

The loss of three sons must have been crushing to the family. Though all three are buried in Europe, the family erected a large memorial stone in their honour in their local cemetery. It reads, “They are numbered among those who at the call of King and Country left all that was dear to them, endured hardship, faced danger and finally passed out of the sight of men by the path of duty and self sacrifice giving up their own lives that others might live in freedom.” 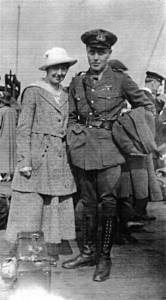 Raymond and Juanita Collishaw in 1935.

It is a true testament of the love between Raymond and Neita that their relationship endured. Despite losing three brothers in the air force, Neita remained committed to a man who made the air force his career. Collishaw recalled that “getting married during the war seemed tantamount to asking a girl if she would like to become a young widow and afterwards I had been on foreign postings where wives were not then allowed.”[13] After a long six-year engagement they were married in England in the summer of 1924 after Collishaw returned from his postings in Iraq.[14] Neita would follow Raymond to numerous postings in England and Egypt until they returned to British Columbia following the end of the Second World War. Along the way they would welcome two daughters, Felicity and Mary.

It is worth remembering that loss was felt in many ways and sometimes, maybe rarely, it had a silver lining.

Dr Mike Bechthold is an historian of the First and Second World Wars and an air power specialist. He holds a PhD in History from the University of New South Wales, Canberra, and an MA & Honours BA from Wilfrid Laurier University. Mike is the author or editor of nine books and has published numerous articles. His areas of specialization include military air power (especially tactical air operations in the First and Second World Wars), the Canadian army in Normandy and Northwest Europe, and the Canadian Corps in the Great War. His most recent book is Flying to Victory: Raymond Collishaw and the Western Desert Campaign 1940-1941 (University of Oklahoma Press, 2017). Mike can be reached at mbechthold@wlu.ca

[6] Mesopotamia also includes small areas of northeastern Syria, southeastern Turkey and southwestern Iran. The region was entrusted to Britain in 1920 as a result of the Treat of Sèvres and became known as Mandatory Iraq or the Kingdom of Iraq under British Administration. For full details see Peter Sluglett, Britain in Iraq: Contriving King and Country, 1914–1932, 2nd ed. (London: I.B. Tauris & Co. Ltd., 2007).