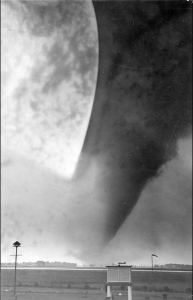 At the age of ten, my father, two sisters, and I were driving through Alberta when a tornado struck. We were traveling from Trail, British Columbia to Saskatchewan for a relative’s wedding when a storm materialized in High River, a few hours from our hotel. We saw the aftermath of the storm on the news from the safety of our hotel, and the memory of that moment remains imprinted on my mind.[1] This experience led to a much longer fascination of mine with tornadoes — an interest that is not unique. As Kevin Rozario argues in The Culture of Calamity: Disaster and the Making of Modern America, “Spectacles of calamity command our attention because they present an occasion for processing, intellectually and emotionally, the experience of living in a world of systematic ruin and renewal, destruction and reconstruction, where technological and environmental disasters always loom.” I’ve witnessed several severe storms across Canada since that first childhood encounter, but nothing to the effect of the devastating storm that touched down in the borderland region of Detroit-Windsor seventy years ago.

In 1946, a tornado traveled across the Detroit River and left a path of destruction from Windsor to Tecumseh. The storm that touched down in southwestern Ontario on 17 June 1946 remains Canada’s third deadliest tornado. The “terrific tornado” captivated the nation as journalists and radio hosts described in length the devastation and fatalities, demonstrating the “social spectacle” of severe storms, as well as the limits of the Canadian federal system. [2] The Windsor to Tecumseh tornado demonstrated that sudden and unexpected disasters could be wide reaching in their impact. The storm, which started in Michigan, wreaked havoc on the other side of the border. Trees, railcars, and concrete bridges were tossed about.[3] Farmers waded through water up to their hips to round up livestock after 36 hours of rain.[4] Worst of all, 17 people lost their lives, hundreds were injured, 400 homes were damaged, and 150 farm buildings were demolished.[5] Ten days later, the borderland region was hit again, with Detroit bearing the brunt of the damage.[6]

The Canadian government, like its southern neighbour, did not provide tornado forecasting in the first half of the twentieth century. In defence of the lack of warning system, Mr. W.E. Turnbull from the Public Weather Office in Toronto argued, “If we sent out warnings every time the conditions were threatening we’d have people frightened stiff during May and June of every year.” In addition to a lack of confidence in meteorologists’ ability to forecast tornados, there was worry that the forecasts would cause mass panic.[7] The fear of uncertainty did not prevent the media from reporting on the gruesome details of tornado disasters. From describing a “7-year-old boy, stripped of his clothing by the wind, [who] walked around in the nude crying for his mother” to a Mrs. Archie MacDougal “being scalped by a piece of flying debris,” some reporters focused on entertaining and shocking its readers, rather than exposing larger social and political concerns associated with the disaster.[8]

Despite a lack of faith in the competence of its citizens to respond to a tornado forecast, the state was not eager to take responsibility for the devastation. All levels of government expressed sincerest sympathies for the victims of the storm; they also quickly determined that they should not be held responsible for funding the recovery efforts.[9] As Danielle Robinson and Ken Cruikshank demonstrate in their analysis of governmental response to the devastating impact of Hurricane Hazel in Toronto in 1954, the federal and provincial governments “immediately promised action, but then reluctantly became involved in reconstruction, leaving as much responsibility as possible to voluntary organizations and local governments.”[10] In the case of the Windsor to Tecumseh tornado, the Red Cross and the Windsor Star Tornado Relief Fund was essential to the recovery process because of Canada’s lack of “articulated national policy for dealing with the financial exigencies of national disasters” in mid-twentieth-century Canada.[11] While financial support poured in from municipalities, organizations, and individuals, the disaster certainly tested the local government charged with rehabilitating the devastated community.[12]

Intergovernmental wrangling over financial responsibility for the rehabilitation project emerged quickly after the disaster. The Township Council of Sandwich East asserted that Ontario Premier George A. Drew gave a “verbal promise” of financial assistance “whilst visiting the Tornado Area at the time of the disaster.”[13] However, the provincial government later rejected the Township’s request for support out of concern of establishing a precedent whereby it would be “difficult to avoid extending help to all” after disasters struck.[14] Minister of the Ontario Treasury Department and soon-to-be Premier Leslie Frost argued that in “ordinary cases of tornadoes, fires, floods and things of that sort, we cannot give relief other than the ordinary medical, health, police and regular government services.” Citizens could insure against these “ordinary” storms, he argued, mentioning that “[n]ot long ago, in my own riding, the wind blew the roofs off about twelve barns.”[15] Whereas reporters used spectacular language, such as “elemental violence” to describe the storm that killed 17 people on June 17, government officials were quick to downplay the tornado in an effort to evade responsibility for the recovery process.[16]

As we enter storm-chasing season, it is useful to reflect on the broader social and political issues associated with the storms while tempering the urge to get caught up in the spectacle of severe weather. In 1946, the Windsor to Tecumseh tornado illuminated the challenge of assigning responsibility for natural disasters within a “three-tier system of government” and the subsequent reliance on voluntary organizations and individual goodwill for relief.[17] In many ways, the tornado is just the beginning of the storm for a community due to the complicated nature of governments.

Katrina Ackerman is a SSHRC Postdoctoral Fellow at the University of Regina. Her current project, tentatively titled On the Periphery of the Nation: Abortion Politics in Atlantic Canada, 1969-1998, is under an advanced contract with UBC Press. Her second project explores the responses of federal-provincial-municipal governments, big business, charitable organizations, and the scientific community to tornado disasters in twentieth-century-Canada.

[16] “Tornado,” The Globe and Mail, 19 June 1946. With the creation of the Ontario Disaster Relief Assistance Program in 1965 and the federal Disaster Financial Assistance Arrangements in 1970, there was some reassurance for communities that they would not bear the full brunt of the costs associated with the disasters.

One thought on “‘It Might Have Been Us’: 70 Years since the Windsor to Tecumseh Tornado”