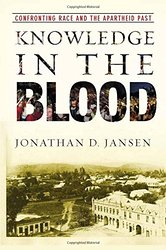 [This is the third post in the Learning and unlearning history in South Africa’s public spaces series.]

South Africa and its universities have been working for over two decades to eliminate racism from their midst and become metaphoric rainbows of inclusion and equality. This project faces serious challenges from various quarters, some unexpected.

Briefly imagine, if you will, growing up in a conservative Afrikaner family and community. Though apartheid had ended a dozen years before, you encounter few black South Africans in your daily existence. There are no black students or teachers at the Afrikaans school you attend, just as there are no black congregants or priests in the Dutch Reformed Church which has such an important impact on how you see the world. You have no black neighbours in the gated, suburban community you live in. Those blacks who do appear in your life have peripheral, and subordinate, roles—they clean your house and tend your mother’s garden. Outside the home, they perform similar functions. You have never been explicitly told blacks are inferior or can and should only have a secondary place in society, but nor have you ever been told blacks are equal.

Now imagine entering university, even a traditionally conservative and Afrikaner one like the University of Pretoria (UP), and suddenly being confronted with the reality that blacks are, in fact, your equals. Indeed, they might even be in positions of power over you and be able to control your future. The experience, according to then Dean of Education at UP, Jonathan Jansen, is jarring, to say the least. In his auto-biographical work, Knowledge in the blood: Confronting race and the apartheid past, Jansen credits this kind of culture shock, and the normalization of blacks as subordinate that lies behind it, as being at the root of South Africa’s and South African universities’ difficult journey toward “transformation,” a journey punctuated by physically and non-physically violent incidents of racial (i.e., anti-black) hatred.

The normalization of blacks’ subordinate role in society is reinforced outside the Afrikaner and white community, in public spaces such as museums. Big Hole Museum in Kimberly, Northern Cape, is one of these places. Not only does the Big Hole experience silence black labourers’ very significant contribution to De Beer’s success, the film and museum present blacks only as mine workers. The overly romanticized film shown at the Big Hole, Diamonds and Destiny, includes this in an extremely striking scene where a smartly dressed Cecil Rhodes is sitting reading in a comfortable chair by one of his many claims. Black workers, without shirts or shoes, toil in the pit below him, digging up his fortune.

Whites appear in the film as successful mining magnates like Rhodes, but also as travel writers (like the film’s narrator), bar tenders, sex workers, small claims’ owners, and, even swindlers. Blacks are only workers, fixing and normalizing their place in the hierarchy of the mine and society as subordinate to whites. It becomes impossible to imagine a black South African as anything other than a miner, a labourer, or a cook, as something other than below whites and subject to white directives. 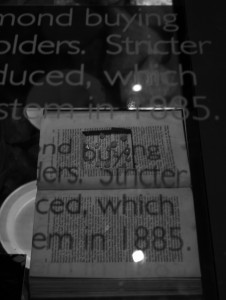 Yet there is an additional dimension to this already constructed equivalence of black and worker. (Black) workers are also thieves. In the 1870s, faced with a high incidence of theft, efforts were made to “deprive Blacks of the right to trade in diamonds.” As the text explains, white claims owners believed that this was the “only way” to deal with the problem. The government, to its benefit, refused to pass legislation that would turn this discriminatory proposal into law. Instead, other measures, such as mandatory strip searching, were enacted. Diamonds and Destiny describes searching in reference to Big Jim, a Zulu king who for whatever reason went barefoot and wore animal skins as he went about the mine and living compound. Every day, Big Jim, as with other workers, were “searched for stolen diamonds, as if for lice.”

This discussion about theft, and especially efforts to prevent blacks from trading in diamonds, does little more than equate blacks with thieves. While the exhibit does not deny that white workers might also be thieves—indeed, visitors are told that white workers were more oppo 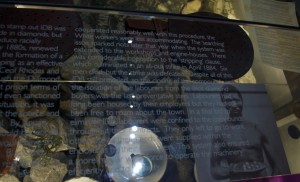 sed to being strip searched when they left the mine than were black workers—the way the exhibit is organized emphasizes the connection between black workers and theft. A particularly striking image of a black worker holding a plate full of diamonds is placed below a pair of leather mittens which visitors are left to assume could be buckled onto workers’ hands to make it impossible for them to steal the diamonds they dug from the earth. Both the mittens and the photo are below the text about efforts to eliminate theft. With little other explanation, visitors are pushed to draw particular conclusions about the connection between thieves, the mittens, and the black worker with the plate of diamonds—that this black worker-thief tried to make off with all those diamonds, but was caught and punished.

Finally, in additional to normalizing blacks’ subordinate position and labeling them all as thieves, the Big Hole experience also works in favour of racism by dehumanizing them. By describing the living compounds as beehives and chicken coops, workers become caged bees and chickens, “no longer allowed to roam the streets freely.” Furthermore, by comparing searching for the diamonds workers tried to secret out of the mine to searching for lice, these no longer fully human workers become lice-ridden and dirty. In the end, the workers who created De Beers’ wealth are turned into insect-infested non-humans who must be not be allowed freedom of movement. Indeed, confining them was for their own good, for it kept them out of trouble with the law, and away from somewhat medieval methods of punishment. (It also, as the museum display makes clear, “ensured a regular workforce to operate the machinery efficiently and to capacity.” Locking up black worker-thieves was, thus, necessary to maximize profit; it was done in the name of capitalism.)

A narrative that reinforces blacks’ subordinate place in South African history and society, as at the Big Hole, works to perpetuate racism and social stratification based on race. This might be expected in museum exhibits and other public narratives that date from before 1994, from before the end of the apartheid and Nelson Mandela’s subsequent election as president. Yet the Big Hole museum was opened in 2006, during Prof Jansen’s years at UP.

South Africa is meant to be desperately working toward eliminating racism. The deep-seeded normalization of black South Africans in subordinate social strata, evident in the Big Hole’s depiction of blacks only as workers and thieves, represents a major obstacle in this process and must be addressed if this goal is to be achieved. How can all South Africans, regardless of the colour of their skin, be seen and treated as equals if this is not the vision of South Africa that is reinforced in something so seemingly harmless as a museum which simply tells the history of the South African diamond industry?