Before he was a prisoner of war in Germany (a story explored in an earlier article), Sergeant William A. Alldritt served as a machine gunner with the 8th Battalion of the Canadian Expeditionary Force (CEF). However, as documented in many of the letters he sent home and in letters written by his colleagues and fellow soldiers, he also used his experience as a pre-war YMCA Physical Director to contribute to the formation and training of his fellow soldiers at training camps in Valcartier and Salisbury Plain. 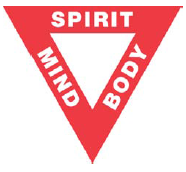 The symbol of the Young Men’s Christian Association, as it looked in the early 20th century. (This image is public domain. All other images in the post are from material in the author’s possession, unless otherwise credited.)

Since it was introduced to Canada in 1851, the goal of the Young Men’s Christian Association (YMCA) was to provide boys and young men with healthy activities and sport, intended to improve their spiritual and moral condition. This philosophy was represented by the three sides of its triangle logo, signifying spirit, mind and body.

In 1906, the YMCA began to establish offices in Western Canada in partnership with the Canadian Pacific Railway (CPR) to support the growing network of railway workers stationed in remote locations across the country. By 1909, Alldritt was employed in one of the first of these offices in Revelstoke, B.C. The partnership with the CPR was considered to be a success when a visiting railway official declared “the YMCA made lambs out of the wild men of Revelstoke.”[i]

Notice of Alldritt’s ascent on the South Albert Peak.

While in Revelstoke, Alldritt joined the Alpine Club of Canada, an amateur athletic association focused on mountaineering. On September 7, 1909, he completed one of the first ascents of South Albert Peak, as documented by club President, Arthur O. Wheeler,[ii] one of the highest peaks in British Columbia.

In 1910 Alldritt returned to his family home in Winnipeg, Manitoba, while continuing to work for the YMCA as an Assistant Physical Director. His duties included providing physical education instruction in Winnipeg YMCAs and managing the YMCA’s summer camp, Camp Stephens on the Lake of the Woods, near Kenora, Ontario. In 1912 he assumed the role of Physical Director at Winnipeg’s Selkirk Avenue YMCA.

Alldritt’s life-long commitment to the goals of the YMCA is apparent in his encouragement of amateur sport in Canada, most notably basketball. Alldritt was an early booster of the sport, having been influenced by T. Duncan Patton, who served as YMCA Secretary in Winnipeg during Alldritt’s youth. Patton had been in Dr. James Naismith’s class at the YMCA Training School in Springfield, Massachusetts, in 1891, when Dr. Naismith first began to develop the game.[iii] 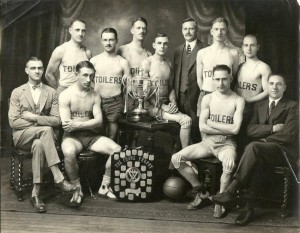 Alldritt (standing in the suit) with the 1926 Winnipeg Toilers basketball club.

In 1983, Alldritt was posthumously inducted into the Manitoba Basketball Hall of Fame in the “Builders” category for his work to establish the Toilers team in Winnipeg, which he began in 1910. Under Alldritt’s guidance, the Toilers became the Canadian national champions in 1926, 1927 and 1932. 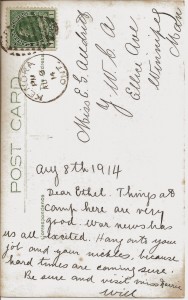 When war was declared in August, 1914, Alldritt was at Camp Stephens. “War news has us all excited” he wrote in a postcard to his sister, Ethel, dated August 8, 1914.[iv]

At the outset of the war, leaders of Canada’s YMCA immediately approached the government with a proposal to provide support to the troops. YMCA officials were sent to the mobilization camp in Valcartier, Quebec, to provide activities which included establishing a comprehensive program of athletics.[v] However, Alldritt did not wish to wait for an official YMCA appointment. His excitement at the prospect of enlisting and serving alongside the men he had coached at the YMCA was described in a letter written by his friend William E. Davison:

…Bill was in charge of the YMCA Camp in August 1914 when the war broke out. I happened to be in Camp at the time and asked him if he intended to enlist. He said he would not but would go as a YMCA Secretary if they wished him. He offered his services at once but when he got back to the City in September he found that the Toiler Group, which as you know he had taken up and served so well had enlisted almost to a man and gone to Valcartier. He then wired the YMCA offering his services and demanded and [sic] early answer. They were not quick enough in moving to suit him and he came to my office one day in September and showed me the railway ticket he had bought with his own money and left that night for Valcartier…[vi]

On Thursday, September 17, 1914, Alldritt arrived in Valcartier and again attempted to obtain an official post with the YMCA. In a letter written to his future wife, Agnes, on September 21st, Alldritt stated: “I arrived here on Thursday morning and reported at once to the YMCA. However they were very busy and I could easily see that I had no chance to go to the front with them. I immediately came to see the C.O. of the 90th and he made me transport Sarjeant (sic).”

Alldritt enlisted as a regular soldier with the 8th Battalion, CEF (the 8th Battalion had amalgamated the 90th Winnipeg Rifles, which was the unit he was attached to prior to serving with the South African Constabulary during the Second Boer War).

While in Valcartier, Alldritt’s prior service with the YMCA did not go unnoticed. In a letter to Agnes written on September 27th, he noted: “Of course I told you that I had been promoted to Sarjeant Physical Instructor of the Battalion, I therefore have a fairly good standing…” His official Service Record notes that he received a promotion while at Valcartier.

Charles Bishop, General Secretary of the Canadian YMCA, described the enduring value of the athletics program at Valcartier:

The value of all this healthy sport was found both in the building up of the men and in their morale in the days of hasty and excited preparation for their service abroad. It also created a precedent that opened the way for longer and larger programs of athletics in the training camps in England and behind the fighting line in France.[vii] 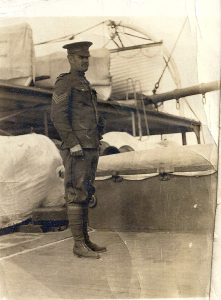 Alldritt aboard the Franconia, October 1914.

On October 3, 1914, Alldritt set sail for Plymouth, England, aboard the RMS Franconia, part of a convoy of 32 ships contracted to transport the more than 30,000 Canadians, their horses, and equipment. In a letter written to Ethel while aboard the Franconia, he noted that his role as Physical Instructor continued to keep him busy. “I am busy as a tailor, from dawn till dark working away at giving the men enough exercise.” In England, the Canadians were sent to Salisbury Plain to receive training prior to seeing combat.

In another letter written following the war, Private C.V. Combe, with whom Alldritt had served and who was by now an editor with the Winnipeg Tribune, wrote about the value that then Lieutenant-Colonel L.J. Lipsett, Commanding Officer of the 8th Battalion, found in Alldritt’s experience with the YMCA during training;

The late Major General S.P. [sic] Lipsett, DSO, had a “mob” (I use the word advisedly) of us raw militiamen to whip into shape for service in France. We knew little of military discipline, and cared less. Later, when under fire, we came to appreciate its value. I don’t know whether he sent for Aldritt [sic] through Col. O’Grady or whether Aldritt dropped as manna from heaven into his lap.

Anyway Lipsett welcomed Aldritt personally and saw at once the value of his training as a YMCA physical director. He had Aldritt give the entire battalion, particularly its non-commissioned officers, instructions in physical “jerks” and Aldritt’s work in this department was priceless. Later, Lipsett (one of the few O.C.’s in the first division to accomplish this) had a trained staff of physical directors – thanks to Aldritt.[viii]

C.V. Combe, as editor of the Winnipeg Tribune after the war (image provided by Soleil Shepherd).

It appears that the team of trained physical instructors was nearly complete by the end of October. In a letter to Agnes dated October 22, 1914, Alldritt wrote: “I am now back in the regiment as an ordinary duty Sgt. My gymnastics work being almost finished.”

In February, 1915, the 8th Battalion was transported to the front and Alldritt distinguished himself as a machine gunner by covering the retreat of his company during the collapse of the Ypres Salient on April 25, 1915, where he was eventually overpowered and taken prisoner. As a POW in Germany, Alldritt made at least four briefly successful escapes, always to be recaptured. In March, 1918, he was transferred to a camp in Scheveningen, near The Hague, Holland, as part of a prisoner exchange, although he technically remained a POW and was not permitted to return home until finally discharged in January, 1919.

Alldritt’s commitment to the goals of the YMCA continued during his internment in Holland. Alldritt managed the organization of a “Gymkhana” athletics event amongst fellow prisoners to mark the Canadian “Dominion Day” celebration on July 1, an event that had been sponsored by the YMCA each July during the war. Bishop documented the YMCA’s efforts to support the prisoners in Holland:

Among these men as it happened was Sgt. Maj. [sic] Alldritt, a former YMCA Physical Director of Winnipeg who had after several attempts escaped from Germany and was now the most active among his fellow prisoners in organizing various activities for their entertainment and improvement.[ix]

In a photograph from Holland in 1918, Alldritt appears as a central figure amongst the prisoners posed in front of a YMCA building, apparently taking pleasure in resuming his old role of organizing recreational activities. 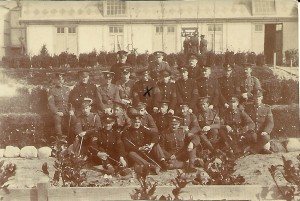 Canadian POWs in Holland. Alldritt is marked with an “X”.

By the end of the war, two Winnipeg men who Alldritt knew well from his YMCA work and with whom he kept in contact while in captivity, his old YMCA instructor T.D. Patton and H.R. Hadcock, had been appointed to senior leadership positions with the YMCA in Western Canada.[x]  These connections proved fruitful for Alldritt, as in September, 1919, he had returned to Canada, and found employment in Victoria, B.C., as one of “Four Veterans…who are specially qualified for their responsible positions… appointed to the Executive Staff of the local Young Men’s Christian Association.” [xi]

A September 1919 pamphlet from the Victoria, B.C. YMCA. Click here for a larger image.

By 1921 Alldritt had returned to Winnipeg where he continued to serve the goals of the YMCA and to influence development of amateur sport in roles which included Director of the Amateur Athletic Union of Canada, President of the Manitoba Track and Field Association and President of the Canadian Amateur Basketball Association, until his untimely death at the age of 51, in February, 1933.

[iv] W.A. Alldritt card to E.G. Alldritt, from Camp Stephens, August 8, 1914. Unless otherwise noted, correspondence is from the unpublished letters of W.A. Alldritt.

[x] By 1919, T.D. Patton had been made supervisor of the YMCA camps in Manitoba and Saskatchewan while H.R. Hadcock held a similar role in Alberta and B.C. (Bishop, p. 75).