“Canada is back.” Back on global climate change. Engaging China. Talking nice to all and sundry. And peacekeeping, where the Liberals have their eye on new missions — especially in Africa.

This year marks the 130th anniversary of Canadian peacekeeping in Africa. The first Canadian peacekeeper in Africa was the fair-haired William Grant Stairs. He was a Victorian celebrity—in part because he was associated with an even more famous American celebrity, H.M. Stanley. Many still remember his “Dr. Livingstone, I presume?” as a key moment in European penetration of what Stanley called “Darkest Africa.”

Stairs remains a hero at Kingston’s the Royal Military College, where is name adorns two plaques. The official College history praises him as the winner of “bloodless battles.” 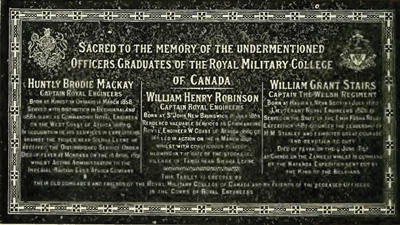 And a peacekeeper Stairs was – in his own eyes. He sailed on a steamer called Peace. He established a fort in central Africa called Peace. His remarkable diary describes how he brought peace to Africa.

Stairs’s second African expedition in the service of the Compagnie du Katanga was even bloodier. It was one part of Belgian King Leopold II’s successful scheme to turn the Congo into his vast, lucrative estate. He reaped a vast fortune from rubber and minerals. Millions died. 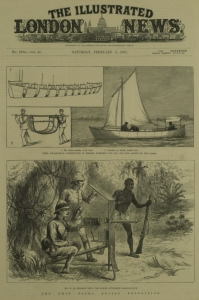 The Canadian peacekeeper was a mere bit player in the Scramble for Africa, unknown to most Canadians. Some, though, recall the South African War (or “Boer War”) , still commemorated at some November 11 ceremonies. This British power grab for a mineral-rich territory was sold at the time as a struggle for peace and civilization. According to writer John Buchan, later Canada’s governor-general, the Dutch settlers had “failed to do justice to the country.”

Fortunately, the Canadians had solutions: burning Boer farms, killing prisoners of war, and herding survivors into that new twentieth-century invention: the concentration camp. Many did not survive. (Rachel Hatcher’s Active History series Learning and Unlearning History in South Africa’s Public Spaces discusses how these camps are remembered today).

Fast forward past the First World War to the post-1945 years. Africans were raising awkward questions about who had the right to rule in, and prosper from, Africa.

In 1960, Patrice Lumumba came to power in the newly-formed Democratic Republic of the Congo. Lumumba was an idealistic nationalist who western governments quickly deemed a communist dupe.

Canada’s UN troops were on the same page. A senior Canadian peacekeepeer conspired in the president’s kidnapping and murder.

Peace and peacekeeping are complicated words. Peace doesn’t always mean the absence of conflict. Rather, Stairs and Buchan drew from ancient Rome. Pax for a Roman general meant maintaining power through force of arms. And maintaining the Pax means beating down those who object to imperial power.

Canadians often tell themselves fairy tales about peacekeeping. From the 1960s on, they claim that Canada has devoted itself to the role of noble umpire, providing a voice of reason to a strife-torn world. Some Canadians have used peacekeeping as an easy way of distinguishing ourselves from the Americans. This despite Canadian spying for Washington during what the Vietnamese know as the “American War” – fuelled in part by Canadian-made weaponry. The Green Beret headgear was made in Montreal.

Today, with a government keen to turn the page on the Harper government’s reactionary militarism, we are hearing a new language. There’s an emphasis on “peace operations.” Conservative critics of peacekeeping, who for the last two decades heaped scorn on idealists who have made the concept part of Canadian identity, are rising up in arms: their Canada is, and always will be, a warrior nation.

But if we really want to turn the page, maybe we should look at Canada and peace from a less narrowly partisan perspective. For all our fine rhetoric, might we not be just adding our military might to the newest Scramble for Africa?

Maybe we need less collective amnesia about peacekeeping. It’s time to consider the peacekeeping that actually happened. Peacekeeping was complex. Part of it arose from the dream of an independent Canada. A lot of it was camouflage for empire as usual.

Maybe, instead of indulging in a collective cover-up of Canada’s most recent exercises in ostensible peace operations —in Kandahar, Iraq and Libya—we could demand a full opening of the books on these military misadventures. We might ask that the world’s second most aggressive pedlar of arms to the brutal Saudi Arabian monarchy recall its own Charter of Rights and Freedoms.

We might ask for a stance towards the world that amounts to something more credible, and more moral, than “Harper Lite.” We might even ask the Royal Military College to stop celebrating, and start analyzing, the shady career of William Stairs. And ponder the two countries frequently mentioned in discussions of renewed Canadian peace operations in Africa. The Democratic Republic of the Congo hosts over three billion dollars in Canadian mining assets. Mali hosts another billion.

“Canada’s back.” To those who know something of Canada’s persistently imperial role in Africa, that Justinian pronouncement has an ominous sound. It sounds more like a threat than a promise.

Ian McKay and Jamie Swift are the authors of Warrior Nation: Rebranding Canada in An Age of Anxiety. Their new book, The Vimy Trap: Or, How We Learned to Stop Worrying and Love the Great War, was launched by Between the Lines Press last Wednesday.