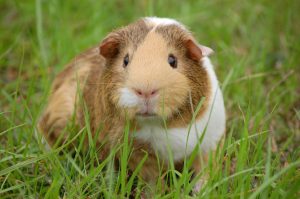 Editor’s note: This is the third in a series of posts from contributors to Animal Metropolis: Histories of Human-Animal Relations in Urban Canada (University of Calgary Press, 2017). In each entry, the contributors use their own chapters as the basis for wider discussions about contemporary developments that highlight the complex interactions between humans and animals. The editors of ActiveHistory.ca are pleased to publish these pieces that originally appeared in late February in The Otter, the blog of the Network in Canadian History & the Environment. The first post in the series by Darcy Ingram spoke to strategies in the animal rights movement.  Christabelle Sethna then followed, commenting upon the animalization and racialization of humans and nonhuman animals. Today, Joanna Dean speaks to the use of guinea pigs in medical experiments. 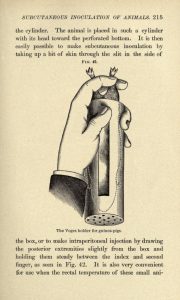 The Voges Holder for Guinea Pigs, from A.C. Abbott, M.D., The Principles of Bacteriology: A Practical Matter for Students and Physicians. 8th ed. (1909). Accessible via https://archive.org/

As yet another charismatic creature escapes from a zoo (Sunny the red panda is still at large in Virginia at the time of writing), as my students elect to write essays about elephants, and I am invited to an animal documentary series populated by eagles, dogs, whales, and primates, I reflect on our decisions to write and teach about certain animal species and not others.  Why is my chapter in Animal Metropolis focused on the horse?  How could I have overlooked the guinea pig?

It is, after all, the guinea pig that carries the weight of our misgivings about modern science and our shared animality. To be a “guinea pig” is no longer even to be an animal; it is to be the subject of an experiment.  So, a mea culpa, in the form of a blog on the guinea pig.

Guinea pigs were critical to the production of diphtheria and tetanus antitoxin. As I describe in my chapter on the Connaught Laboratories, horses produced antitoxin in their blood.  Guinea pigs were the measure of its potency. They were injected with a fatal dose of diphtheria toxin, and then given varying amounts of horse serum. Their bodies served to measure of the strength of the serum. One antitoxin unit was the unit that neutralised 100 times the fatal dose in a 250 gram guinea pig. 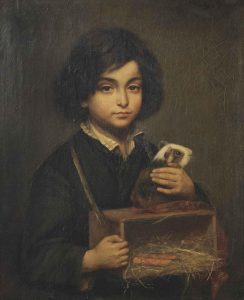 The guinea pigs described in 1915 in the Connaught laboratory books were a motley lot: #76 was black and white and tan on neck; #77 was black and white and tan on the rump;  #78 was simply brown; and  #87 was white and tan with a brown spot on the head.[1] There is no record of their origins, but it is likely they were purchased from hobbyists.  Just as there was a dog fancy and a mouse fancy, so there was a guinea pig fancy: hobbyists bred exotic guinea pigs and showed them, and children kept them as pets. They were endearing little creatures. Boys extolled their virtues for the children’s section of the Globe.  They sometimes went off script: thirteen-year-old Evelyn Wade described his guinea pigs on April 5, 1913, as very stupid, hard to keep, and prone to fighting. “They have teeth about three quarters of an inch long,” he observed, “Sometimes if you take one up when it is angry, it will bite you, and it hurts, because the teeth are so sharp.” It is only at the end of his letter that young Wade remembers that he hopes to have his letter printed, and notes that guinea pigs are nice pets for children because they are fun to play with and do not carry disease like cats and dogs. 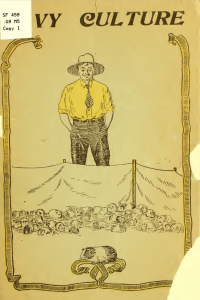 Hobbyists were encouraged to breed guinea pigs for the growing laboratory market. Source: E. Michaels, Cavy Culture: A Book of Practical Instructions on the Raising and Marketing of Guinea Pigs (1920).

Laboratory demand for guinea pigs surged in the early twentieth century, and the Connaught chose to breed their own stock, rather than rely upon an emerging but unreliable network of breeders, dealers, and guinea pig farms. They struggled to keep the animals healthy and experimented with housing and diet until an outbreak of streptococcal infection wiped out the original colony. They were replaced with a colony of 125 white pedigreed guinea pigs purchased from the prestigious Lister Institute in London in 1930. After some initial difficulties, the Lister strain began to flourish, and in 1969 there were 3,000 guinea pigs in two air conditioned buildings, a colony capable of producing 35,000 guinea pigs per year.

It was over this time period that the meaning of the term guinea pig shifted. In the early twentieth century newspapers published numerous accounts of guinea pigs being injected with a variety of noxious agents as a proxy for the human. These stories ran beside descriptions by fond boys of their pets. By midcentury, the term guinea pig takes on new meaning to refer to any person or thing that is the subject of an experiment.  The animal has all but disappeared, and in its place is a term that carries within it all the anomie and angst of modernity.

[1] For the history of the Connaught Laboratories see Robert D. Defries, The First Forty Years, 1914–1955: Connaught Medical Research Laboratories, University of Toronto (Toronto: University of Toronto Press, 1968), as well as records at the archives of Sanofi Pasteur Canada (Connaught Campus). Many thanks to Chris Rutty, archivist, for guiding me through the archives. For the genesis of the standard guinea pig in postwar England, see Robert G.W. Kirk, “‘Wanted- standard guinea pigs’: standardization and the experimental animal market in Britain, ca.1919-1947,” Stud.Hist.Phil.Biol.&Biomed.Sci.39 (2008): 280-291. For an account of guinea pig farming for the laboratory market see, among others, E. Michaels, Cavy Culture: A Book of Practical Instructions on the Raising and Marketing of Guinea Pigs (1920), available on the Internet Archive.