On June 21, 2017, National Aboriginal Day, Prime Minister Justin Trudeau announced that his government would be changing the name of the day to National Indigenous Peoples Day. He also announced that his government would change the name of the Langevin Block, which houses the Prime Minister’s Office and the Privy Council Office. The name change had been requested by Chief Perry Bellegarde of the Assembly of First Nations and a group of Indigenous MPs, including Romeo Saganash, Hunter Tootoo, Robert-Falcon Ouellette and Don Rusnak, among others. A few months earlier, the Langevin Bridge in Calgary was renamed the Reconciliation Bridge.

Shortly after the name change was announced, a series of predictable parties, including Conservative MP Paul Calandra, decried the name change as an attempt to “whitewash history”. Calandra and others like him engaged in this debate by arguing that Sir Hector-Louis Langevin had a mixed legacy, and that he also played many important positive roles in Canadian history, particularly as a Father of Confederation and as a senior Quebec Bleu MP, a Cabinet minister, and Sir John A. Macdonald’s Quebec lieutenant, who argued for clemency for Louis Riel.

There is certainly a debate that can be had – and which we historians are having – about issues related to renaming of statues, buildings, and the like. But that is not what this post is about. Rather, I want to engage with some questions related to the renaming of the Langevin Block that I posed to Twitter earlier this week. 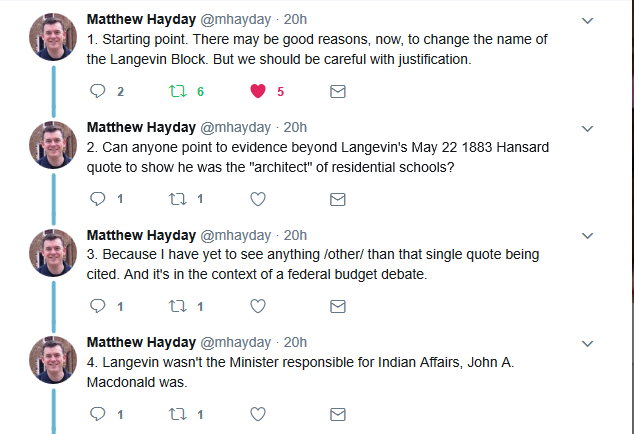 What I think has become lost in the debate about the renaming is the manner in which it has been justified. There may well be good reasons for us to accept the renaming of the Langevin building, and I have no intention of becoming some sort of great champion of his record. However, the primary reason that seems to have been advanced is that Hector-Louis Langevin was the “architect” of the residential schools system, that he was the key member of the federal government who pushed for its creation, and, it is implied, that he was the primary person to argue for separating Indigenous children from their parents. This seems to be the main reason for the calls to change the name of the building, and it has featured prominently in the press coverage. But is this true? And if not, do we have a responsibility, as historians, to intervene in public debates about this issue?

The claim regarding Langevin’s central role has been made in a number of places. As colleagues who know more about this topic have pointed out to me – and I make no claims to having particular expertise on either late-19th century Canadian political history or Indigenous history – Langevin’s role has been cited in the report of the Truth and Reconciliation Commission[1], in Agnes Grant’s No End of Grief: Indian Residential Schools in Canada[2], and in the Canadian Encyclopedia entry, among other places.

Where things get problematic for me is that all of these sources, and all press coverage of the issue, base their case on a single quotation. It comes from a speech made by Langevin, then Minister of Public Works, in the House of Commons during a debate on the budget on May 22, 1883, when he said:

The intention is to establish three Indian industrial schools in the North-West…They have succeeded very well in the United States, and it is quite likely that they will succeed here as well. The fact is if you wish to educate these children you must separate them from their parents during the time that they are being educated. If you leave them in the family they may know how to read and write, but they still remain savages, whereas by separating them in the way proposed, they acquire the habits and tastes — it is to be hoped only the good tastes — of civilized people.[3] [Emphasis added]

Langevin, as Minister of Public Works, presumably would have been speaking to the issue since it was his department that would be responsible for building the schools. But does this make him the architect of the idea to create the schools? Was he the main driver behind them? Perhaps, and more research could, and likely should, be done into his papers and those of his ministry to find out what else he might have said or wrote about the topic.

But here is where things get murky, and where I’m inclined to question the “architect” label and the amount of credit/blame that has been attached to him as a primary instigator of the residential schools. Langevin was not the minister responsible for Indian Affairs. Prime Minister Macdonald had reserved that role for himself. And less than two weeks earlier, Macdonald himself had been the one to present the concept of residential schools in the House:

Secular education is a good thing among white men, but among Indians the first object is to make them better men, and, if possible, good Christian men by applying proper moral restraints, and appealing to the instinct for worship which is to be found in all nations, whether civilized or uncivilized. A vote will be asked for in the Supplementary Estimates for 1883-84, for a larger description of schools. When the school is on the reserve the child lives with its parents, who are savages; he is surrounded by savages, and though he may learn to read and write his habits, and training and mode of thought are Indian. He is simply a savage who can read and write. It has been strongly pressed on myself, as the head of the Department, that the Indian children should be withdrawn as much as possible from the parental influence, and the only way to do that would be to put them in central training industrial schools where they will acquire the habits and modes of thought of white men; so that, after keeping them a number of years away from parental influence until their education is finished, they will be able to go back to their band with the habits of mind, the education, and the industry which they have learned at these schools.[4] [Emphasis added]

To me, this raises serious questions about the extent of Langevin’s role in this process, and about who was actually the originator and champion of the policy. In the absence of more evidence, it seems that this was Macdonald’s policy, and that Langevin was effectively parroting his Prime Minister’s speech.

Langevin’s comments were still odious and offensive, to be certain. But in the absence of more compelling evidence, what he appears to be is a dutiful minister carrying out the will of the minister actually responsible for the dossier (John A. Macdonald), insofar as it touched his ministry. He was complicit in implementing the policy, absolutely. But I don’t think that necessarily means he was a driver of the policy, any more than one of Stephen Harper or Justin Trudeau’s MPs or Cabinet Ministers who repeat standard party talking points are necessarily the brains behind a given operation.

More evidence may well come to light regarding Langevin’s role in the residential school system, and I would absolutely welcome learning more about this. But in the absence of this evidence I think we, as historians, need to be cautious about how we discuss, or write, or encourage others to accept, this narrative about Sir Hector-Louis Langevin. As a Roman Catholic, conservative, Bleu Member of Parliament, his are not the politics that align with those of most of Canada’s professional historical profession. Langevin’s is also a much easier name to remove from buildings and bridges than that of Prime Minister Macdonald. Moreover, inserting a note of caution into how we treat his historical memory may not be a politically popular line to be taking. But I believe that as historians, we do have a professional obligation to consider the evidence carefully before creating or supporting interpretations of history that may cast a not-entirely warranted negative cast on a person’s legacy. As I noted at the outset, there may well be good reasons, regardless of all of this, to change the name of the Langevin building. But we should also be cautious about inadvertently – or by our silence – allowing a narrative about Langevin’s role to be created without more evidence to support it.

Matthew Hayday is a professor of Canadian history at the University of Guelph. He researches and teaches about Canadian political history, language policy, celebrations and commemorations.