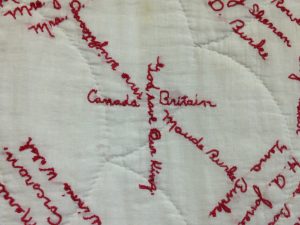 It is a cold, wintry Wednesday afternoon in January 1917. Half a dozen women of varied ages are seated around a large quilt frame set up in the sitting room of a rural farmhouse in Oxford County, Ontario. Some work quietly, their thoughts running to domestic tasks set aside to be here. A few cannot help but think about their sons and brothers serving overseas. Others chat quietly with their neighbour about the price of flour or the latest news from the Western Front. All bend their heads over the canvas of white cotton directly before them, their fingers deftly moving needles trailing red cotton thread in and out of the fabric. Each tiny, careful stitch helps turn their collective project into an intricate quilt; each quilt completed and auctioned off raises money for their war charity work. Scenes like this, repeated in numerous communities across the country, were an integral part of First World War Canada.

It is well known that on the home front, women and girls were also mobilized for war, many going above and beyond their usual duties to contribute to the war effort in any way they knew how. For most, this occurred through the accomplishment of traditionally-feminine domestic tasks. Untold numbers of female volunteers spent thousands of hours rolling bandages, knitting socks, sewing blankets, canning preserves, and constructing care packages to send overseas to soldiers and displaced civilians. Like so much of women’s unpaid labour, however, war work was often dismissed for being “recreational” in nature.[1] While most of these hand-crafted items have long since been used and disappeared, surviving fundraising quilts continue to serve as tangible remnants of how Canadian women used their domestic skills to contribute to the war effort.

Historic quilts are popular collector’s items for their complicated designs and exquisite craftsmanship, and the war’s centenary has sparked an interest in quilts as communicators of personal stories.[2] A handful of such quilts can be found in museums in Oxford County, a largely rural and agricultural region in southwestern Ontario. Two in particular, the Braemar Women’s Institute Autograph Quilt and the Wolverton Red Cross Quilt, were recently included in a travelling museum exhibit in 2015. The exhibit, which paid homage to wartime voluntarism in Oxford, was one of 100 events planned as part of a five-year long commemoration project called “Oxford Remembers: Oxford’s Own.” Each event explores an aspect of Oxford’s wartime experience, in the hopes of expanding current understandings of how rural and agrarian Canadians participated in the war effort. 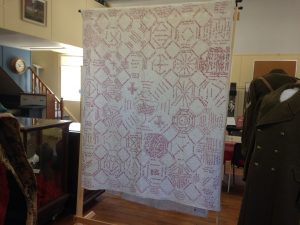 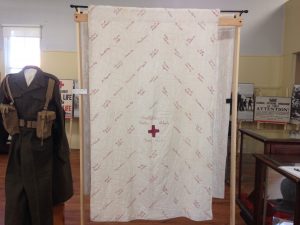 The Braemar and Wolverton autograph quilts were an important component of the 2015 exhibit because they are surviving, physical evidence of local women’s voluntarism. A handful of such quilts still exist because they were mainly decorative pieces, and owners often went to great lengths to ensure proper storage and preservation. When it came to fundraising, the trendy autograph quilt was one of the more common styles adopted by rural women’s charitable and benevolent societies. Many groups partnered with the Canadian Red Cross and adopted the phrase “red cross work” to describe their voluntary work for many kinds of war charities. Due to this association, wartime autograph quilts often bear the same distinctive markings: white cotton, red stitching, and red crosses. In communities across Canada, women raised money through these quilts by soliciting small donations (often ten or fifteen cents) in return for having the donor’s “signature” sewn on to the quilt. The completed quilt would then be auctioned off, with monies directed toward a wartime cause.

By the 1910s, quilting had largely fallen out of fashion, especially among urban women, replaced by new social clubs and commercial entertainments. However, it remained a popular practice among rural and farm women, and today endures as a symbol of “a bucolic rural past.”[3] In the countryside, quilting was a form of domestic work in which women took great pride, as well as one that prompted sociability among friends and neighbours. Thus, the quilting bee continued to be a mainstay in many Canadian communities during the First World War. For contributors, these gatherings were a mix of emotional labour and leisure; they allowed quilters to put their skills to use for the national war effort, but also offered a safe space where wartime anxieties could be vocalized among women, and reciprocal comfort and support offered.

The Braemar quilt was sewn by the village’s local Women’s Institute, established in 1907 and consisting of women who lived four miles north and south of Braemar, and in the neighbouring townships of West and East Zorra. Though details surrounding its sale are scant, we do know the quilt was constructed in 1918 and the monies earned were directed towards the Canadian Red Cross.

The Braemar quilt contains a pattern of overlapping circles, on top of which are thirty diamonds stitched in red thread. Between each diamond is a block comprised of clusters of hand-sewn “autographs,” representing the hundreds of local donors who paid to have their name appear. The centrepiece of the quilt is a maple leaf, containing the signatures of the quilt’s creators and the year.

The quilt’s vivid red stitching, painstakingly completed by many hands, tells the story of Braemar’s wartime experience and changing social dynamics in this rural community. As historian Mary Murphy notes, “historic quilts provide insight into the changing cultural values, aesthetics, and technologies as well as into the life and times of individual quiltmakers and their families.”[4] The hundreds of signatures, particularly their placement and size in relation to others, offer a map of where citizens stood in relation to one another socially, economically, and patriotically. Typically, on autograph quilts, a centrally-located or larger signature indicated wealth and status. For instance, the central maple leaf contains the names of Braemar’s Women’s Institute’s executive, while the non-ranking members are noted in separate blocks on the periphery. While these groups could be very hierarchical, in this case, the maple leaf and names contained within it, signifies the Women’s Institute as a central patriotic institution in that community. The bordering names suggests non-ranking members still had a role in holding the community and organization together. 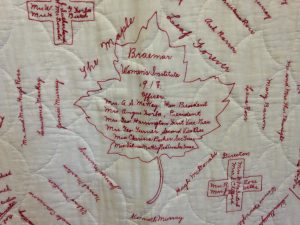 Blocks of signatures are also devoted to local churches and schools, servicemen and their wives, and even the Braemar girls’ baseball team. Most, however, contain the names of individual citizens from across Oxford County, the many Scottish surnames indicative of the region’s ancestral ties and heritage. Interspersed among the signatures are patriotic sentiments like ‘God Save Our King’ and ‘The Maple Leaf Forever.’

The Wolverton Red Cross Quilt was commissioned by the Wolverton Public School, and donated under that name, although little is known about the identities of the quiltmakers. Likely, it was a group of mothers whose students attended the school, some of the older female students, or a local women’s auxiliary. This quilt is fashioned in a pattern of overlapping stitched circles, over top of which are 187 blocks. A single signature is sewn onto alternating blocks, totalling eighty-nine names. The centrally-located red cross suggests this quilt was produced for Red Cross fundraising purposes, but it may also have been appropriated to signify the piece’s charitable purpose and connection to the war effort. Surrounding the red cross is the name of “Wolverton Public School” and the date, November 1917. 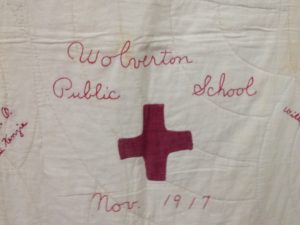 Women’s reasons for volunteering with such time-consuming projects varied. Most had a loved one serving overseas, while others found value in the usefulness of the work and hoped their contributions would ease the burden on Canadian soldiers. During the war donating to, or helping create an autograph quilt, allowed Canadians who were not necessarily comfortable attending public events or did not have a lot of time to devote to war work, an opportunity to still express patriotic feelings. Purchasing a quilt, or having an autograph stitched onto one, was public acknowledgment of the contributor’s loyalty, sacrifice, and commitment. For the quilt-makers, the needle held therapeutic value as the work offered a brief diversion from wartime concerns. Hand-crafted pieces, like quilts, were also imbued with women’s “emotional energy”[5] and hopes for peace.

The occasion of the war’s centenary has prompted new conversations about how Canadians remember and commemorate, and analyses of surviving artifacts can offer a fresh perspective on the diverse ways patriotic sentiment was exercised and demonstrated. These two autograph quilts, for instance, provide a rich and unique perspective on Oxford County’s wartime experience from the oft-ignored viewpoint of rural women. Among their many uses, they reveal local socio-economic dynamics, serve as tactile histories of the communities in which they were made, demonstrate community members’ interest in, and knowledge of, the war’s events, and highlight the important role of rural and farm women’s voluntarism. That these quilts were produced in the first place, and still survive today, is an important reminder that women’s domestic skills and unpaid labour, regardless of age, class, or location, were an important and undervalued part of the war effort on the Canadian home front.

Rebecca Beausaert is an adjunct professor in the Department of History at the University of Guelph. She is also the exhibit researcher for the “Oxford Remembers: Oxford’s Own” project. Her doctoral dissertation, which explored women’s leisure activities in late-nineteenth and early-twentieth century rural and small-town Ontario, is currently being prepared for publication with University of Manitoba Press.