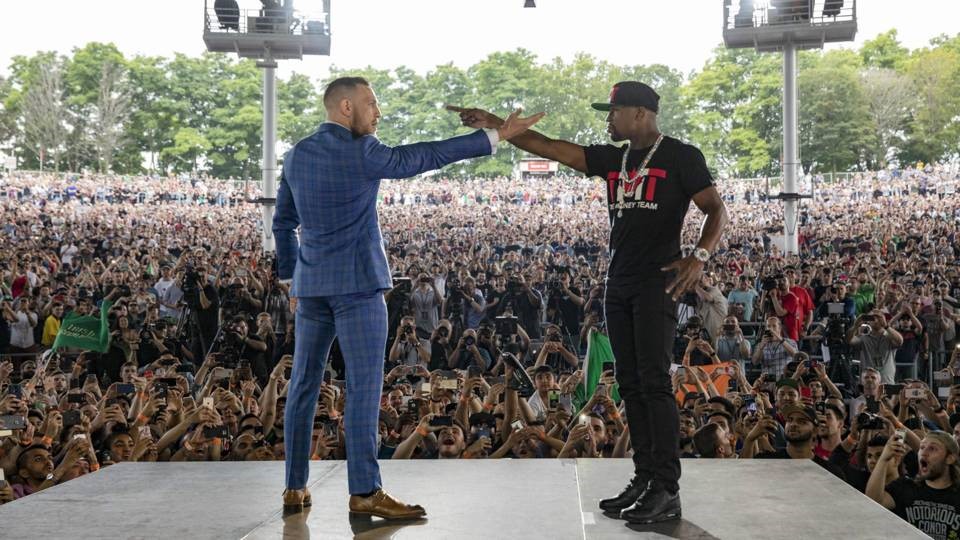 By Angie Wong and Travis Hay

On the 12th of July, 2017, downtown Toronto was over-run with a sea of Irish flags and rowdy young white men.[1] More than 16,000 fans had flocked to the scene to witness the Mayweather-McGregor World Tour Press Conference, which promoted the upcoming boxing match between the undefeated African American champion Floyd Mayweather Jr. (widely regarded as the greatest boxer of all time) and the white Irish mixed martial artist Conor McGregor. Not long into the proceedings, the crowd—overwhelmingly in favour of McGregor—began to hurl taunts, boos, and insults at Mayweather. Enjoying and even encouraging these proceedings, McGregor tried his best to humiliate his opponent, going so far as to shout “dance for me, boy!” as the crowd sang ‘Olé.’[2] When it became Mayweather’s turn to take the microphone, he was drowned out by the crowd who shouted “pay your taxes” again and again (a reference to his recently reported financial troubles).[3] Though he was largely unphased by the Toronto crowd’s hostility, Mayweather failed in his attempt to garner much support from the Canadian crowd, despite having sported a baller cap and t-shirt that infused the Canadian flag into his signature logo.

As critical race feminists as well as fans of both boxing and mixed martial arts (MMA), we could not help but notice that McGregor’s Canadian fans conducted themselves in a fashion strikingly similar to their American counterparts at Trump rallies. We are also troubled by the extent to which McGregor’s sudden rise to celebrity has followed a particular cultural script of the ‘great white hope’—that is, the white, working-class fighter who brings with him a lunch-bucket mentality to the ring and compensates with work ethic what he lacks in natural athletic ability or talent, thereby allowing him to best a Black champion and restore racial pride to a white population that sees itself in crisis. In titling this piece ‘The Great White Hype’ (also the name of a 1996 film poking fun at this very issue), we want to argue that McGregor’s cultural success has more to do with a revival in white pride than in pugilistic prowess. In short, this issue has a history, and the Toronto press conference was evidence enough that we remain trapped within it.

In 1908, Jack Johnson became the first Black man to capture the world heavyweight championship when he knocked out the white Canadian boxer Tommy Burns. Because he was also known to consort with white women, Johnson became one of the most hated figures in the nation at the time; accordingly, white America began to yearn for a ‘great white hope’ who could soundly defeat Johnson and restore American white masculine pride. Jim Jeffries, a boxing legend who had fought in the late 19th century, came out of retirement to try his hand at defeating Johnson. Jeffries, who fans referred to as ‘the great white hope’, was brutally knocked out. When footage of the fight, which took place in Reno, Nevada, was seen more widely across the country, race riots, lynchings, and widely orchestrated attacks on Black communities followed.[4] 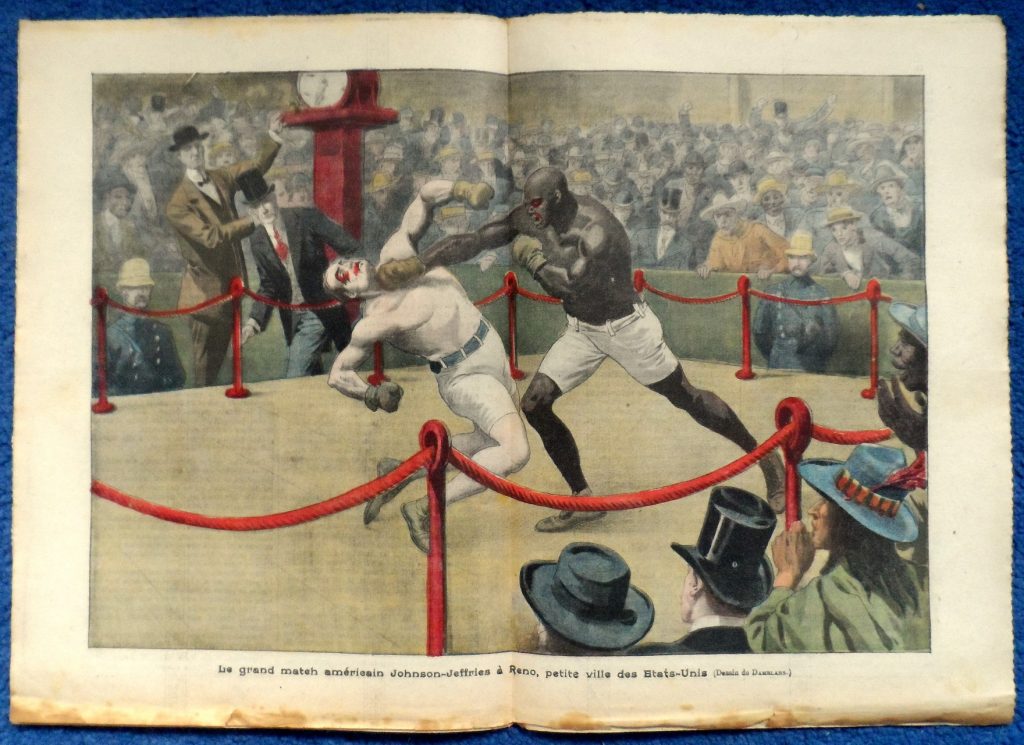 The Johnson-Jeffries episode is an important example demonstrating the extent to which racial tensions have been embodied and exacerbated by the sport of boxing: whereas Jim Jeffries symbolized the figure of the great white hope, so too did Jack Johnson embody the trope of the hated Black boxer—that is, the unbeatable and uppity Black champion best exemplified by Carl Weather’s portrayal of Apollo Creed in the film Rocky (itself a great white hope narrative). Thus, we can appreciate the ways in which the celebrity of the white boxing challenger and the anti-celebrity of the Black boxing champion are, in the western racial imaginary, dynamically co-constituted and often come into emergence through one another. The Johnson-Jeffries affair was present—albeit spectrally—in Toronto on the 12th of July, as was the legacy of ‘The Cinderella Man.’

On the 13th of June, 1935, Irish-American boxer James ‘The Cinderella Man’ Braddock captured the heavyweight championship by defeating the Jewish-American champion Max Baer as a ten-to-one underdog at Madison Square Garden.[5] Not only was Braddock ‘The Cinderella man’ because of the long odds of his victory, but because he had endured poverty during the Great Depression and (like McGregor) was forced to rely on government relief programs before achieving boxing fame.[6] Significantly, Braddock fought with an Irish clover on his boxing shorts, which was in contrast to his championship opponent Max Baer, whose shorts sported the bright star of David. As a figure who represents a rags-to-riches, ethnically Irish and nationally American boxer, the story of ‘The Cinderella Man’ is intensely relevant to McGregor and his celebrity status, as they both embody white working-class social mobility through toughness. And because the figure of the ‘great white hope’ is always co-constituted alongside his counterpart, we can also see the politics of class mobility informing anti-Black racism throughout the sport’s history. 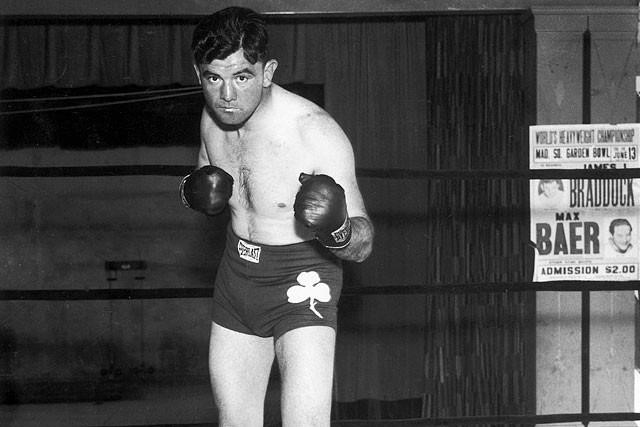 James ‘The Cinderella Man’ Braddock – the prototype for the Irish(-American) working class fighter.

On the 22nd of June, 1937, boxing legend Joe Louis knocked out James ‘The Cinderella Man’ Braddock in brutal fashion, ending his storied rise to fame. In contrast to Jack Johnson, Joe Louis was one of the few Black American athletes to have become a nationally venerated figure: during the Second World War, ‘the Brown Bomber’ (as he was popularly known) did a series of recruitment promotions and prize-fighting events to support the war effort and entertain the troops; however, Louis fell into severe financial distress despite his previous stardom. As one source recalls:

In order to further endear himself to the American public (white America), Louis enlisted in the army and fought promotional bouts for various army departments (which were in racially segregated units). His reward for this public show of patriotism was being hounded by the federal government for taxes on these ‘promotional bouts’ that left him emotionally and financially broke.[7] 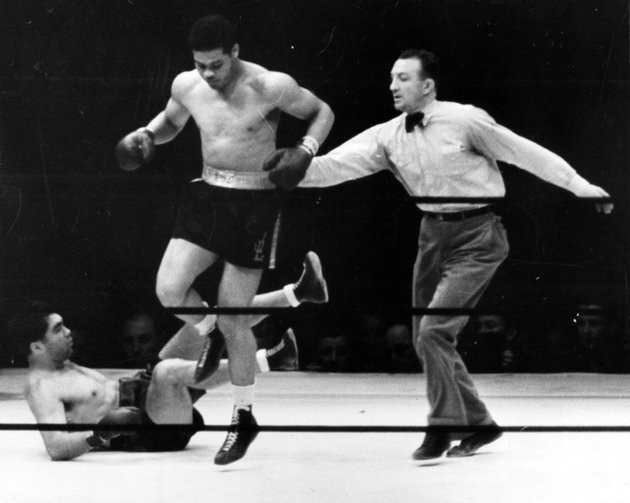 Joe Louis, AKA ‘The Brown Bomber’, steps over a defeated Max Schmeling.

The legacy of Joe Louis matters in the context of the Mayweather-McGregor World Press Tour; so too does the story of ‘The Cinderella Man’ Jimmy Braddock and the ‘Great White Hope’ Jim Jeffries inform and inflect the social structures of feeling that are invested into the upcoming event. Thus, while the homoerotic, masculinist, and always class-configured spectacle of two men fighting each other in a ring (while partially naked) can be about a great number of things, anyone with a cursory knowledge of the sport of boxing ought to appreciate the foundational ways in which the sport has always been firmly embedded in a racialized and most often racist dialectic.

Conor McGregor’s anti-Black antics in Toronto and at other stops in the World Press Tour made news headlines globally: in New York, McGregor responded to allegations of anti-Black racism by quipping that he was “black from the belly button down.”[8] Recalling here that Black men were lynched following Johnson’s brutal knockout of ‘the great white hope’ Jim Jeffries—as well as Fanon’s articulation of lynching as a sexual revenge[9]—we can appreciate the ways in which McGregor’s invocation of the excessiveness and the monstrosity of the Black penis sits uncomfortably within a racial history of murder, lynching, and sexual violence in the sport of boxing.

The white crowd’s chanting of ‘pay your taxes’ was also uncomfortably reminiscent of the chants of ‘lock her up’ during Trump’s rise to presidential office. Moreover, for readers unfamiliar with the story of McGregor, the Irish fighter is widely reported to have collected welfare cheques just weeks before his debut in the sport’s lead promotion. All of this has come together to construct McGregor as the hard-working Irishman who successfully acquires upward social mobility not through natural athletic gifts but through hard work and determination. When taken together with his brash, cocky, and unapologetic attitude, these tropes of the hard-working white male immigrant and his rise to fame and fortune suggest that McGregor, like Trump, benefits from a larger structure of social feeling that celebrates and uplifts white men who are celebratory and shameless about their wealth, sexism, and racism.

The Irish flags that littered downtown Toronto on the 12th of July eerily resembled the ‘Make America Great Again’ hats that coloured Trump rallies. Indeed, the behavior of those who sported them was largely indistinguishable: rowdiness, covert and overt displays of white ethnic pride, celebrations of racial violence, and masculinist displays of shameless chauvinisim. Importantly, McGregor—the Irish fighter—remained the crowd’s heavy favourite even when appearing at press conferences in the United States with Mayweather, the American fighter. It is therefore relevant in this capacity to apply what Will Cooley has written about shows of support for white ethnic boxers in other contexts: mainly, that white fans of the sport shroud their celebrations of white pride in Irish flags as a way to conceal overt displays of white supremacy. Thus, both Donald Trump and Conor McGregor return to their white fans something they feel they have lost—that is, “the white ethnic toughness so lacking in many modern assimilated white men.” Both achieve cultural and financial success and rise to heights of unprecedented power by virtue of being seen as “organic, authentic, working class men unrestrained by the shackles of modernity.”[10]

Seen in this historical light, the hoisting up of McGregor as the next great white hope is informed by the same noisy, fragile, and hostile social sentiments that allowed a crude and tasteless reality star to become the most powerful man in the world.

Angie Wong is a second-generation Hong Kong–Toishan scholar born on Treaty 7 territory. Angie currently lives in Toronto where she is pursuing her doctoral degree in Humanities at York University. Her research investigates Canadian histories of anti-Asian racism, policies of exclusion, and the literary history of the social justice magazine The Asianadian.

Travis Hay is a settler historian from Treaty No. 9 territory in Thunder Bay, Ontario. He is in the final stages of his doctoral degree in the History Department at York University where he studies connections between science and settler colonialism in the context of Canadian federal Indian policy.

[4] As Neil Farrington et al. recall “Riots and lynching occurred all across the US in the days after the fight. In Little Rock, two blacks were killed by a group of whites after an argument about the fight on a streetcar; in Roanoke, Virginia, six blacks were critically beaten by a white mob; in Norfolk, Virginia, a gang of white sailors injured scores of blacks… in New York City, one black was beaten to death and scores were injured; in Shreveport, Louisiana, three blacks were killed by white assailants.” See their Race, Racism, and Sports Journalism (New York: Routledge, 2012), p. 73. More generally, see Chapter Five titled ‘Boxing: Race on the Ropes’, pp. 69-83.

[5] Readers are most likely familiar with the figure of Braddock as portrayed by Russel Crowe in the film Cinderella Man (2005).

7 thoughts on “The Great White Hype: Conor McGregor and the History of Race in Boxing”