Editors Note: This is the first post in a two-part series on the history of NDP leadership conventions.  The second part to this series will be posted tomorrow morning.

For example, historically insurgent leadership candidates from the left have fared poorly in contests for the federal leadership of Canada’s left-wing party. Additionally, despite federal and provincial electoral returns that rival Saskatchewan’s as the party most reliable provincial base of support, the NDP has never elected a leader from British Columbia.  This trend is reflected in  2017 leadership candidate Peter Julian from BC who dropped out of the race after failing to gain momentum. This two part series will be diving into past leadership conventions as a way of looking at larger trends within the NDP leadership votes.

The Waffle movement, which formed around the “Manifesto for an Independent and Socialist Canada” dominated the policy debates and media coverage of the 1971 race to replace to Tommy Douglas, the first leader of the federal NDP. Although David Lewis, the guiding force of the Co-operative Commonwealth Federation (CCF) and the chief architect behind the NDP’s formation in 1961, was widely expected to run for and win the NDP leadership, the 1971 leadership contest was closely contested. In addition, the race produced passionate debates over the issues of Quebec’s right to self-determination and the impact of the women’s liberation movement on the NDP.

The Waffle first challenged the NDP by demanding at the 1969 convention that it adopt policy positions emphasizing public ownership as the only cure for American control of the Canadian economy. Despite the defeat of the “Waffle Manifesto”, the group continued to organize and challenge both provincial and federal NDP leaderships to adopt and, in the cases of provincial governments in Manitoba and Saskatchewan, enact left-wing policies.

Ed Broadbent was the first of five contestants in the race to replace Douglas, indicating that his campaign would focus on issues of full employment, control over foreign investment, government policy on science, and Broadbent’s fixation, industrial democracy.  Because he was only thirty-four years old, the press focused on Broadbent’s youth, his perceived intellectualism, and suggested that he appeared “ideologically closer” to the Waffle than other potential leadership candidates.

John Harney became the second candidate to enter the race in November 1970.  Although he did not hold a seat in Parliament and did not have any support from federal caucus, the press perceived the thirty-nine year old Harney as an attractive candidate, describing him as “bilingual, articulate and contemporary”.  Harney explained that, under his leadership, the NDP would move to the left, emphasizing the need to attract support from the urban and rural poor in addition to the workers, intellectuals, and progressive middle-class that already supported the party.

A cropped close up of David Lewis from the September 1944 Commonwealth Labour Parties conference .

A week later, David Lewis joined the race after much anticipation.  Lewis had struggled to win and retain a federal seat until he recaptured York South for the NDP in 1965 and held it amidst the 1968 Liberal surge.  He announced his long-expected candidacy for the leadership with the support of nine MPs at an early December press conference in Ottawa and proclaimed himself, “a very angry, very militant democratic socialist.”  However, Lewis made clear he would pursue a moderate policy approach for the NDP and would not woo Waffle supporters with radical policy commitments, claiming, “I’ll swallow them only if they are digestible.”[1]

The Waffle committed to a collectively run campaign and ultimately selected twenty-nine year old History lecturer James Laxer as their candidate, and as Laxer recalls, “I was as much the representative of the Waffle movement’s ideas as an actual candidate for the leadership of the party,” suggesting that the Waffle aimed primarily at influencing party policy.[2] 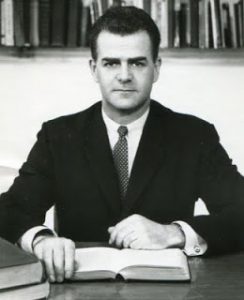 The fifth and final candidate, Frank Howard, entered the race in January 1971 with an explicit attack on the Waffle.  Howard was known as a maverick in the federal NDP caucus who had broken with the majority to vote in favour of the War Measures Act.  However, in his leadership campaign he contrasted his background as miner, ironmolder and logger with the university professors already in the race and criticized the Waffle’s “academic and professional theories” of nationalization of resource industries as “out of touch with the realities of politics and with common sense.”[3]

By the time Lewis, Broadbent, Harney, Laxer and Howard began a tour of Canadian cities for a series of twenty public debates in February, clear policy divisions had emerged between the five leadership candidates.  More than any other issue, the Waffle’s position on Quebec polarized the NDP leadership race.  In January 1971, Laxer released the five resolutions regarding Quebec the Waffle proposed for the upcoming NDP convention, including a commitment to support Quebec’s right to self-determination and a commitment from the NDP to build “a people’s alliance” between English Canadian and Quebec socialists.

At the convention in Ottawa, key policy votes on gender parity within the party and Quebec’s right to self-determination went against the Waffle and seemingly confirmed their minority status in the party.  But although overwhelming favourite David Lewis led from the first ballot, his support grew agonizingly slowly through the next two ballots.  Laxer, as party and union leaders feared, finished second, ahead of Harney.  After the third ballot, all key Harney supporters, donned Lewis buttons and attempted to convince others to do likewise.  In the end, Lewis won on the fourth ballot by a vote of 1046 to 612 over Laxer.[4]  In retrospect, Desmond Morton, who had initially supported Harney, described the vote as “a shabby triumph for a veteran who deserved better from his party.”[5]

After the convention, leading Wafflers, despite the series of policy defeats and Laxer’s loss, expressed satisfaction at the outcome of the convention.  To the chants of “Power to the people” from his supporters, Laxer made the standard gesture of moving for Lewis’s election to be made unanimous, and called on the party to “get together in the 1972 election.”  After the speech, Laxer called his showing a great victory, and argued “it is impossible for the left ever again to be ignored by the NDP.”

Following Lewis’s resignation in the aftermath of his defeat in the 1974 election alongside the party’s loss of fifteen seats, the federal NDP again sought a new leader in 1975.  Despite holding power in three provinces, the media perceived the federal NDP to be in the doldrums, a belief confirmed by the lack of interest in the federal leadership by any of the three provincial premiers, Allan Blakeney, Ed Schreyer and Dave Barrett and the party’s interim leader, Ed Broadbent, declaring in January 1975 that we would not seek to replace Lewis as party leader.

John Harney had finished ahead of Broadbent in the 1971 leadership election and his 1975 leadership campaign again focused on the importance of the NDP appealing to Quebec and portrayed himself as the only candidate capable of doing so. 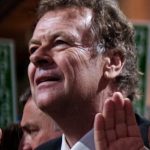 The youngest candidate in the contest at twenty-nine years old, Lorne Nystrom had first been elected in the rural Saskatchewan riding of Yorkton-Melville in 1968.  Despite Nystrom’s youth, he failed to generate much enthusiasm among New Democrats seeking an exciting, radical voice as party leader and many believed he was laying the groundwork for a future leadership bid. 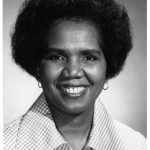 The mantle of left insurgent candidate was instead worn by British Columbia MLA Rosemary Brown.  Brown, the first Black Canadian woman elected to a Canadian provincial legislature was also the first Black woman candidate for the leadership of a major Canadian federal party.  However, she was a backbencher in Barrett’s government and was more associated with B.C. women’s movement than traditional NDP circles.  However, she rallied leftists and feminists in the party to her cause, and her candidacy created momentum that unnerved both the party and union leadership.  Although she had not been associated with the Waffle, Brown perceived that the strength of opposition to her candidacy drew, in part, on the “old internal struggles waged around the Waffle and other factions in the party.” Indeed, NDP historian and former party official Desmond Morton described her uncharitably as “a second Jim Laxer, with more fire, fewer facts and a dependence on trite platitudes that troubled even some of her own followers.”

By March 1975, with no other candidates stepping forward Broadbent changed his mind and entered the race to succeed Lewis.  Immediately thrust into the position of front-runner, Broadbent focused on updating the NDP’s image for a new generation, explaining, “the party’s base is no longer a person who fears the Depression and unemployment… In the advanced capitalist society, the NDP’s constituency is the man or woman who may be well off but who is still being screwed by the system – whether it be wages versus profits, the high mortgage interest rates that keep him from getting a home or lack of job satisfaction.”[6]

Broadbent’s widely expected victory was slowed by larger-than-expected support for Rosemary Brown at the convention and the lower-than-usual number of union delegates in attendance.  Nystrom failed to generate momentum as the anti-Broadbent candidate and most of his supporters turned to Broadbent after he finished behind Broadbent and Brown on the third ballot.  Brown, however, excited by the relative success of her candidacy and the other candidates’ emphasis on socialist and feminist policies, declared her second place finish “a real victory.  We’ve managed to shift the party to the left somewhat.”

Although the NDP  fared extremely poorly in Quebec until 2011, and had a provincial membership far below that in much smaller provinces, contemporary issues about Quebec’s place in Confederation have featured prominently in the NDP’s leadership races. For example, in 1971 the issue of Quebec’s right to self-determination and the party’s willingness to vocally endorse this right was the central issue in the debate between front-runner David Lewis and left insurgent candidate James Laxer.

As mentioned at the start of this post, insurgent leadership candidates from the left have historically been unsuccessful in their leadership bids. Both James Laxer (1971) and Rosemary Brown (1975), excited at outperforming expectations, declared moral victories in their second place finishes and claimed that their candidacies had pushed the party to the left. Will Niki Ashton’s left candidacy end in a similar “moral victory”?  Although Jagmeet Singh has positioned himself as the front-runner in 2017, his candidacy likewise represents an insurgence. “Will he succeed in winning a first ballot victory where Lewis (1971) and Broadbent (1975) failed?”

Editor’s Note: Tomorrow we’ll be back with the second part of this series. Tomorrow’s post will include observations on the 1985 & 1995 leadership conventions and a wrap-up of the historical trends that might apply to the 2017 race.