Early on the morning of the 4th of May 1916, a military column in French West Africa set out to quell a rebellion. Their mission was one small part of World War I in Africa, about which little is said in Canada. This post helps illuminate the under-appreciated global and colonial ramifications of the First World War.

The column, led by cercle commandant Henri Maubert, was composed of 759 men, mainly African mercenaries, a few tirailleurs sénégalais and handful of European officers. Marching out of Bobo-Dioulasso, situated to the south west of actual Burkina-Faso, it was heading for the rebellious village of Boho, 42 kilometres away. The column’s objective was clear: attack and destroy the fortified village and its defenders. Arriving on the 6th of May, Maubert started bombarding the strong hold which he describes in his carnet de route: “Le travail de destruction devient formidable, sans toutefois causer la moindre émotion parmi les rebelles dont le courage est véritablement superbe, ils occupent toutes les ouvertures pratiquées dans les murs, et notre feu fait des trouées terribles dans leurs masses profondes ”[1]. A first assault on the walls failed and the column, running out of ammunition and water, had to abort its second assault and retreated to the nearest French outpost of Kofila a few kilometres away. The next morning, Mauberts sent out a scouting party to Boho which they found abandoned. On hearing the news, Maubert promptly dispatched a 600 strong demolition team to raze the fortifications and the village to the ground. Towards 5:30 pm, a messenger arrived at Kofila and described what had been found in the village : “les rebelles ont laissé dans le Boho, plus d’un millier de cadavres, trois caveaux funéraires archi-combles, dans plusieurs salles mesurant à peine 3 mètres de côté, on peut compter jusqu’à 40 corps etc. Et encore, la partie centrale de la soukala laissé debout, n’a-t-elle pas été visitée”[2]. Among the dead were many women and children. Mahir Saul and Patrick Royer, authors of the sole monograph on this conflict[3], state that the death toll could have been as high as 3 000. On the French side, 70 men were injured and 10 were killed. 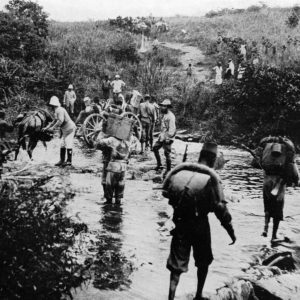 The Belgian Force Publique pictured in East Africa in 1918. Image from Wikipedia: https://en.wikipedia.org/wiki/African_theatre_of_World_War_I#/media/File:Congo_belge_campagne_1918.jpg

Boho had from the beginning of 1916 been a pole of anticolonial resistance. In fact, a major part of what would become the High Volta colony in 1919 was in open rebellion against French authority. The foremost and direct reason for this revolt was the conscription that was imposed in French West Africa by the Commission des armées on the 9th of October 1915. Facing a strong numerical disadvantage with Germany, many French colonial officers harboured the idea that the French colonial empire, especially North and sub-Saharan Africa, had to be used as a reservoir of men for the French army. Charles Mangin, the most famous of these colonial officers, suggested in his 1910 book La force noire that the African colonies could furnish up to 300 000 men[4]. These numbers were a gross exaggeration based on a strong misconception of Africa’s demography at the beginning of the 20th century.

When the conscription decree was announced in 1915, recruiters started prowling the land for available young men. Their quota for 1916: 50 000 men. They managed to conscript up to 54 000. For the French colonial subjects, one thing stood out from this wave of recruitment: its resemblance to the slave trade. Men were taken by force and others were chosen to be given in relation to their status in the community by village elders. As a result, many emancipated slaves and their descendants found themselves conscripted. Other times, the young men would take to the bush while the village elders tried to dupe the French recruiters by presenting them the elderly members of the community. The British Gold Coast, presently Ghana, also saw a huge wave of migrants coming from the French colonies. Indeed, the racial ideology that dominated among British military officials made them reluctant to recruit black Africans, and that information appears to have been known by these migrants. The British army preferred using Indian soldiers, since they conceived of them as less barbaric and more disciplined then black Africans could ever be, even though they would eventually recruit a few regiments of Kings African Rifles to fight in German West Africa.

In the High Volta region, many villages decided to form a coalition and fight off the recruiters and French officials. This rebellion was not only motivated by conscription. The high Volta region was poorly occupied by France, which did not have the resources to consolidate its power there. In a certain sense, this was in fact a war to win back independence, and it was not the first time these villages had decided to face off foreign invaders and empires. Nevertheless, the French officials in the region managed to repress this movement by the end of 1916. What followed was a huge disarmament campaign and numerous trials against rebel leaders up to 1919. Up to 30 000 inhabitants of the region died due to this conflict, and many are simply unaccounted for. Saul and Royer argue that this was no mere rebellion, but a war, which they named the Volta-Bani war.

The history of the First World War in Africa, when it comes to major campaigns facing off European armies (although these armies consisted mostly of Indian and African troops and carriers), is not a subject that has been ignored by academia. Many monographs, notably one by Hew Strachan[5], explore the specificities of the war and its impact on the African continent. Other historians, like Marc Michel[6], have been interested by Africa’s contribution in terms of men and resources in the Great War, but also by the African experience on, for example, the Western Front. Only recently has there been more interest in the struggles of Empire on the French and British side. The Russian, the Ottoman, the German and the Austro-Hungarian empires all were subject to internal revolts and revolutions. But so did the British and French empires, except that most of these “internal” turmoils were outside of continental Europe. The Volta-Bani war was one of them. In fact, this conflict was the largest that West Africa had seen since the arrival of the French in the 1850s. It even outranks other conflicts on the continent after the Great War.

African resistance to Empire during the First World War is a ripe subject waiting to be exploited by historians. In 2015, a collective of researchers formed around Jonathan Krause of Oxford University with Richard Fogarty, Julie d’Andurain and Jan-Georg Deutsch, have started a project around the theme of rebellion and mobilisation in French and German colonies[7]. Their results are yet to come. I take this opportunity to invite scholars of the First World War and also the general public to look to the African continent as a theater of war, a territory that was exploited by the French and British empires for the war effort, but also as a scene of African resistance to European colonialism. One must also not forget that, although its seems counterintuitive given the destructive nature of the First World War, the golden age of French imperialism was after the First World War. The German colonies were annexed to the French and British Empires and the French government decided to increase its investment in the colonies with a strong development programme (programme de mise en valeur). This programme aims were to modernise the French colonial territories and increase their production, thus building an internal imperial market space. Essentially, the First World War led to what historians Christopher Andrew and Alexander Kanya-Forster qualified as “the climax of French imperial expansion”[8].

Thomas Vennes is a Masters candidate at UQAM. His research focuses on police operations in French West Africa during the First World War.

[1] “The destructive force of our artillery became tremendous, but this had no effect on the rebels moral. Their courage was truly stunning, and every breach we managed to make in the walls was occupied and our fire power would punch deep holes in these masses of men. ” translation by the author, in « Carnet de route » du commandant de Cercle Henri Maubert, reproduced in Moussa Niakate, La révolte des Bobos dans le cercle de Dédougou et San (1915-1916), Bamako, Maison du peuple, n.d., vol.2., p. 78. This book is a typed and mimeographed collection of documents from the Malian National archives.

[2] Ibid., p. 80. “The rebels left more than a thousand bodies in Boho, and three overcrowded collective tombs. In many rooms no bigger than three meters large, there were stacks of up to 40 bodies. And so far we have not yet explored parts of the Soukala not destroyed by the bombardment ” translation by the author