A jury’s decision to acquit farmer Gerald Stanley for second-degree murder in the death Colten Boushie, a Cree man, has brought jury selection issues to public attention in Canada. Press reports note that the jury lacked any Indigenous members, a composition achieved at least in part by the defendant’s use of ‘peremptory’ challenges. The Criminal Code provides these challenges to defendants, who can challenge the inclusion of potential jurors without providing any reason.[1] Since the verdict, many, including Boushie’s family, have called for reforms to jury selection processes, including measures to ensure that defendants cannot use peremptory challenges to prevent Indigenous Peoples from serving on juries in criminal cases.[2] 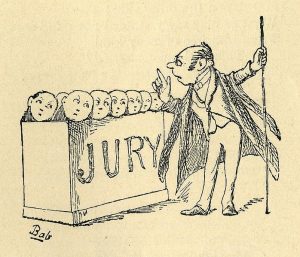 Historians of the criminal justice system will not be surprised that jury selection became contentious in the Stanley trial, in part because of the long history of bias against First Nations people in the courts, and in part because jury selection has often been a heated issue when jurors deliver verdicts in cases steeped in racial, ethnic, political, and/or religious tensions. Allegations of ‘jury packing’ have been common in such cases. The lack of Indigenous jurors in many courtrooms in Canada is the most recent, and perhaps the most troubling, example of this historic problem.

Most complaints about jury selection have been animated by a concern for protecting the interests of defendants against the power of the state. None other than E.P Thompson noted how the state employed jury selection procedures to shape juries, and worried that the reduction in the number of peremptory challenges in England would unfairly limit defendants’ ability to scrutinize and influence the composition of juries.[3] Historians of the Irish criminal justice system suggest that defendants faced unfair juries.[4] In Nova Scotia, in the pre-responsible government period, Irish Catholics and political reformers railed against packed juries.[5] Jury reform became an important plank of the political reform movements in Upper Canada for similar reasons. Jury selection was also contentious in the famous trial of Patrick Whelan for the murder of Thomas D’Arcy McGee. The Irish Canadian press claimed that the prosecution challenged all of the Roman Catholic jurors, and even two Protestant jurors married to Catholics.[6] Similarly, in the 1875 murder trial stemming from the Caraquet Riot in New Brunswick the Catholic defendants faced a jury composed entirely of protestants.[7]

These episodes often stirred public outrage and sometimes resulted in law reform designed to prevent jury packing. Many of these changes limited state power in jury selection. For example, the fights over jury selection in Upper Canada led reformers to pass legislation in 1850 that created one of the most complex systems of jury selection in the common law world. Nova Scotia also implemented important jury act reforms in the nineteenth century.

By the last third of the nineteenth century, many legal professionals began to question the value of juries on a more fundamental level, offering critiques that amendments to jury selection procedures could not wholly address. Traditionally, common law lawyers, judges, and jurists portrayed the jury as a key plank of ‘British justice’ because jurors could choose to acquit defendants facing oppressive state prosecutions. The famous Bushel’s Case of 1670 helped secure the principle that that the jury had the power to determine its own verdict, free from the threat of punishment. Juries could thus find in favour of defendants in politically-charged cases, such as in the seditious libel trials of Robert Gourlay in Upper Canada and Joseph Howe in Nova Scotia.[8] (Or, more recently, when juries refused to convict Henry Morgentaler for performing abortions in violation of the Criminal Code). The power of juries to stand against state prosecutions led English jurist William Blackstone to describe the jury as the palladium of liberty. After the establishment of responsible government, however, juries seemed less necessary as a bulwark against state oppression since elected assemblies could prevent executives from punishing political opponents in the courts.[9]

Critics of juries also began to allege that jurors were either too biased to reach fair verdicts and/or lacked the requisite knowledge and training to judge cases effectively. Because jurors were drawn from local communities, and were intended to represent community values, they created opportunities for citizens to express community agency. This was long perceived as a strength, but in the late nineteenth century juries came under attack because they represented local views. Many judges, lawyers, and politicians, infused by the liberal spirit of the age, believed that the justice system had to be rational, disinterested, and consistent. They accused jurors of possessing local perspectives that made legal decisions unpredictable. It was better to leave decision-making to legal professionals, many argued.

The result was that legislators sharply reduced the use of juries. Grand juries were eliminated (or were simply not introduced in some jurisdictions). Their role in deciding whether a case should go to trial was instead handed to lawyers. Legislators also severely curtailed the use of juries in civil litigation.

Only the criminal trial jury remained a vital institution, and even it was used less and less frequently. Legislators in the nineteenth and twentieth centuries provided that the vast majority of criminal offences in Canada could be decided summarily without a jury.[10] Most Canadians paid little attention to this trend. If they were aware of it, many likely approved given that citizens often found jury service burthensome.[11]

The gradual erosion of criminal jury trials was halted with the Charter of Rights and Freedoms. Section 11(f) of the Charter provides that any person charged with an offence has the right “to the benefit of trial by jury where the maximum punishment for the offence is imprisonment for five years or a more severe punishment.” The Charter thus ensured that Canada will continue to employ the ‘palladium of liberty’, despite its perceived flaws as an instrument of justice.

As Gerald Stanley’s trial suggests, problems of jury selection and the potential for jurors to allow individual or community perspectives to infect their decisions remain important issues. Former Supreme Court of Canada Justice Frank Iacobucci investigated the lack of Indigenous Peoples on juries in Ontario in a 2013 report. Iacobucci noted that “many of the issues affecting juries during the nineteenth century,” such as the inconvenience of jury service and problems of jury selection, “remain live issues today.” He concluded that the jury system “as it has developed and operated in Ontario, like Ontario’s justice system in general, has not often been a friend to Aboriginal persons in Ontario.” Iacobucci thus urged procedural changes and educational initiatives to make juries more representative. He also suggested Criminal Code amendments to “prevent the use of peremptory challenges to discriminate against First Nations people serving on juries.”[12]

These strike me as important steps, although history hints that the jury will continue to be a controversial method of settling disputes when men and women lacking legal training, drawn from communities, and relying on their personal and local knowledge, perspectives, and biases are asked to deal with difficult or complex legal problems infused by issues of race, class, gender, or ethnicity. I suspect that piecemeal reform to this ancient instrument of ‘British justice’ will only mildly mitigate the harsh injustices experienced by Indigenous Peoples in the criminal justice system.

R. Blake Brown (Twitter: @RBlakeBrown) is an Associate Professor of History and Atlantic Canada Studies at Saint Mary’s University and an Adjunct Professor at the Schulich School of Law at Dalhousie University. He is the author of A Trying Question: The Jury in Nineteenth-Century Canada (Toronto: University of Toronto Press and the Osgoode Society, 2009).

[9] Paul Romney, “From Constitutionalism to Legalism: Trial by Jury, Responsible Government, and the Rule of Law in the Canadian Political Culture,” Law and History Review, 7 (1989): 121-174.

[10]Nancy Parker, “Swift Justice and the Decline of the Criminal Trial Jury: The Dynamics of Law and Authority in Victoria, BC, 1858-1905,” in Hamar Foster and John McLaren, eds., Essays in the History of Canadian Law, Volume VI: British Columbia and the Yukon (Toronto: University of Toronto Press and the Osgoode Society, 1995), 171-203.