This is the fourth in a five part series featuring the Lost Stories Project.

The same week that a mob of torch-carrying white supremists marched through Charlottesville Virginia protesting the removal of a statue of Confederate general Robert E. Lee a group of Indigenous and settler Canadians gathered in Hope BC to celebrate the erection of a cedar memorial pole commemorating the Stó:lõ boys who had been kidnapped during the 1858 Fraser River gold rush.  Carved by Chief Terry Horne, the work depicted a Stó:lõ father and his son reaching for one another, but their hands not quite connecting.  The pole was a work of commemorative public art, part of the Lost Stories Project. The creation of Terry Horne’s carving and the story that it tells are at the heart of Sandra Bonner Pederson’s film, Kidnapped Stó:lõ Boys. 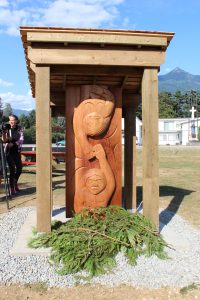 According to obscure records in the colonial archives, the Stó:lõ boy depicted in Horne’s carving was but one of the “great many” who had been kidnapped by “vicious white men” (American miners) and taken to California. The father’s name was Sokolowictz. He tried repeatedly over four years to secure his son’s rescue and repatriation.  Ultimately these efforts were in vain.  The boy died in the custody of his kidnapper, and today he remains buried in the Sacramento pioneer cemetery under the name Charley Crum – the moniker assigned him by his abductor George Crum.  Sokolowictz’s fate is unknown, but Indigenous oral traditions recorded forty years after the kidnappings shed light on the ways the kidnappings affected families.  One Stó:lõ father is described as having searched frantically in the woods for his kidnapped son only to die of grief a few days later.

Chief Terry Horne carved the memorial pole in the spring of 2017 inside of Chilliwack and Hope High Schools. There Stó:lõ and non-Indigenous students and teachers conversed with the master artist about the information found in the archival records. These conversations helped the wider community develop an appreciation for the contexts behind, and the impacts of, the kidnappings.  They learned, for example, that the men who stole the boys across the international borderline were in fact applying in British Columbia customs and laws from California where ranchers and farmers could legally acquire a certificate authorizing them to have the “care, custody, control, and earnings of [an Indigenous] minor, until he or she reached the age of majority.” Permission from parents was ostensibly required, but in practice children were simply abducted due to a supplemental California law that rendered it impossible for a white man to be convicted of any offense on the testimony of an Indian. 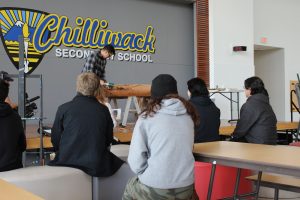 In our increasingly virtual digital world the emotional intensity of people’s response to the physical statues in Charlottesville and in Hope might surprise some. Of course, the incidents reveal less about people’s feelings towards bronze and cedar memorials than they do about communities’ profound engagement with the histories that give such objects meaning.  The story of slavery, Jim Crow law, racism, oppression, and intimidation that gives meaning to the statue of General Lee was and is a well-known one.  The tragic story of the Salish boys who were kidnapped and taken to California was lost.  More than a century of settler colonial incursion and government policy aimed at (among other things) teaching Indigenous children how to forget who they were and where they came from had all but eclipsed this story from Indigenous memory; certainly it was never a part of the historical narrative taught within Canadian schools.

But, having dropped from historical consciousness does not necessarily mean that an event no longer has significance.  The legacy of the kidnappings stretches far beyond the three or four years during which the incidents occurred. Moreover, the abductions can only really be appreciated when placed in their larger historical context – for the 1858 kidnappings of Stó:lõ boys was not an isolated incident, but a chapter within a two-century long narrative of Pacific Coast Indigenous families and youth being victims of seizure by settler colonial individuals and institutions.

Spanish explorers in the 1780s and 90s, for example, removed dozens of Indigenous children to Acapulco with the idea of transforming them into missionaries who would eventually return to proselytize BC’s coasts. When in 1792 Britain’s claims to the region trumped Spain’s, these children became forgotten casualties of European colonial geopolitics.  Similarly, for more than a decade after slavery was outlawed within the British Empire in 1833, Hudson’s Bay Company traders at both Fort Langley and Fort Vancouver exploited the labour and bodies of Indigenous child slaves for corporate profit.  And for the Salish families whose sons were stolen away to California in 1858 there would be little time to grieve before British Columbia’s first residential school opened in 1862 at what is now Mission City – ushering in more than a century long era of what the Truth and Reconciliation Commission has determined was cultural genocide.

Over the coming decades whatever confidence Coast Salish Indigenous people might still have had in the government’s ability and willingness to protect their children’s welfare largely evaporated when in 1884 the 14 year old Sumas boy, Louie Sam, was broken out of a Canadian jail and lynched on a tree just north of the international border by an American mob dressed in women’s clothes and wearing Coast Salish ceremonial face paint.  Undercover investigations by Canadian detectives determined the boy was innocent of the crime for which he was accused by the Americans, and indeed that the mob was led by a man who was seeking to deflect suspicion to Louie Sam for his own guilt in the murder of an American shop keeper.  Prime Minister John A. Macdonald together with the BC government, however, chose to appease the Americans rather than bring justice to Louie Sam’s family and community.  These are just some of the lost stories that provide context for the way Indigenous people have more recently experienced and come to understand what is now commonly referred to as “The 60s Scoop” (the forced removal and adoption of Indigenous children into settler Canadian families in the 1960s) and, more tragically still, the ongoing phenomena of Missing and Murdered Indigenous Women and Girls. 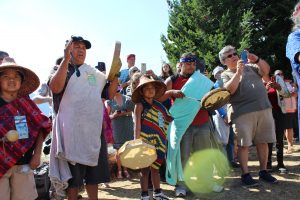 Through news coverage of the torch-bearing, Nazi slogan chanting, Virginia mob approaching the statue of Robert E. Lee the world was presented with a vivid and disturbing example of the power that historical narratives hold.  But the contrast between the white supremists in Virginia and the Stó:lõ community in BC speak to the diverse purposes to which stories can be directed.  In each case the communities were engaging a story of racial oppression and violence, but whereas one saw it as a vehicle to accentuate existing societal divisions the other regarded it as an opportunity to build dialogue and understanding across societal divisions.

On the banks of the Fraser River the Knowledge Keepers and community leaders who were called as witnesses spoke to how the sacred ritual and widespread conversations that had been part of the process of helping Terry Horne create his art work had revived a lost story in a way that could help people live better lives today. They additionally explained that the stories contributed to providing solace to the long-suffering and still sentient spirits of the kidnapped boys.

In the words of Sonny McHalsie, who served as speaker (i.e. Master of Ceremonies) at the pole’s inauguration, it was not only that the boy’s lost story had been brought back to life, but that the boy’s spirits had been awakened and were reminded of the extent to which the contemporary generation cared for them. Lost stories that are found, in the Stó:lõ view, have the power to heal generations both present and past.