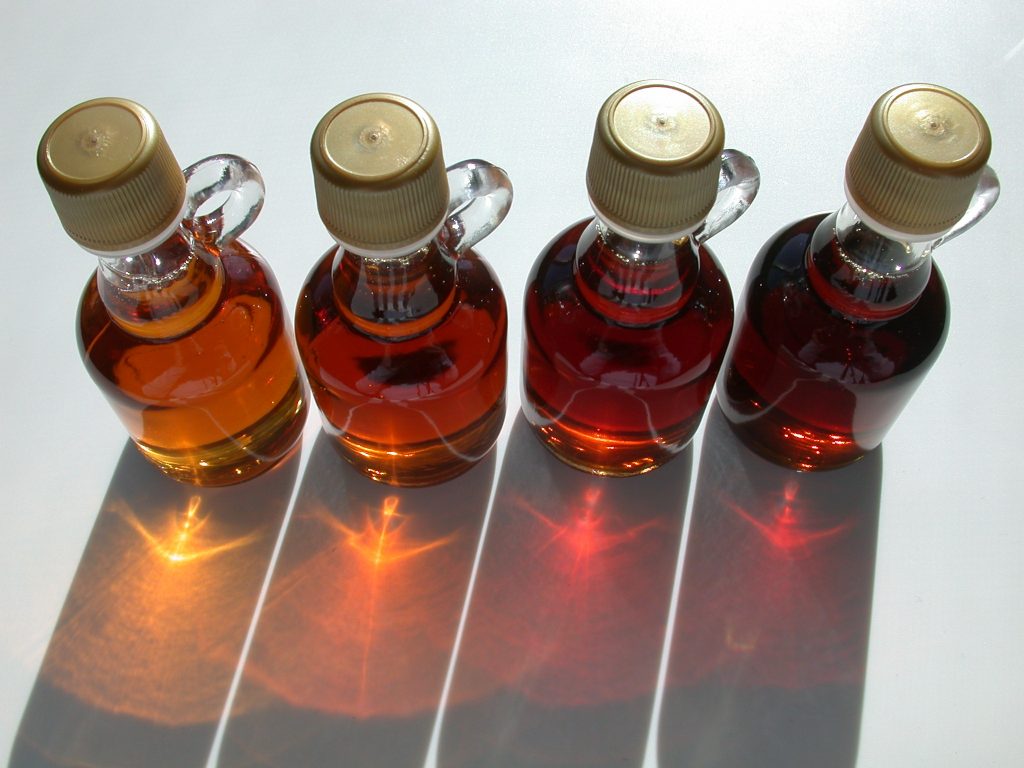 Visit any Canadian tourist shop and you will likely find shelves filled with maple syrup, often branded with red maple leaves in an attempt to invoke feelings of national pride. Canada makes over 71% of the world’s maple syrup and there are more than 8,600 producers of maple syrup across the country. Given these stats it is hardly surprising that Canadians have latched onto maple syrup as something uniquely Canadian. It draws up images of plaid, snow, and pancake breakfasts.

Something we rarely talk about is the role of colonialism and commercialization in maple syrup production. Maple syrup is not uniquely Canadian. The earliest settler references relating to maple syrup were by André Thevet in 1557 and by Marc Lescarbot in 1606. In both cases these accounts of maple syrup were connected to knowledge shared by Indigenous communities. Maple syrup knowledge existed long before settlers arrived in the land we currently call Canada. Haudenosaunee traditional knowledge includes descriptions of piercing maple trees for ‘sweet water’ and many Anishinaabe communities have traditions of collecting sap during the “sugaring off” period. (For additional context, see Nanaboozhoo and the Maple Trees).

How can we talk about Indigenous knowledge in relation to maple syrup? In 1996, the Royal Commission on Aboriginal Peoples reported that Canada’s education systems privileged Western knowledge while Indigenous ways of knowing was frequently dismissed and viewed as inferior. This disconnect between academic knowledge and traditional land based knowledge is still felt in many post-secondary institutions today, with Indigenous scholars being pressured to work within colonial structures.

Leanne Betasamosake Simpson’s article “Lands as Pedagogy: Nishnaabeg intelligence and rebellious transformation” is an excellent example of presenting Indigenous knowledge as a valid way of knowing the past. Simpson’s work opens with a story about Kwezens, an Anishinaabe girl learning about maple sugaring practices while on the land. Framing the article in this way highlights how traditional stories can be used as theoretical anchors in the same way theory is used by academics to anchor an argument. Simpson goes on to argue that,

To re-create the world that compelled Kwezens to learn how to make maple sugar, we should be concerned with re-creating the conditions within which this learning occurred, not merely the content of the practice itself. Settlers easily appropriate and reproduce the content of the story every year, within the context of capitalism, when they make commercial maple syrup; but they completely miss the wisdom that underlies the entire process because they deterritorialize the mechanics of maple syrup production from Nishnaabeg intelligence and from aki. (p. 9).

Many settlers have no knowledge of the traditional teachings or original origins of maple syrup harvesting in Canada. Colonialism has attacked Indigenous knowledge, dispossessed communities from their land and attempted to eradicate Indigenous worldviews.

An artistic approach to acknowledging this loss and the colonial impact on maple syrup can be seen in “oh-oh Canada” a 2016 collaborative project which created “unsettled” maple sugar candies. The candies came in numerous shapes including buffalo, barbed wire, a noose, and other items representing the harm inflicted toward the land and Indigenous peoples. Distributed at public commemoration events and to the general public these Indigenous designed maple candies challenged settler Canadians to think about colonialism in relation to a product that is commonly associated with the national identity of Canada.

As historians we need to acknowledge the damage done by colonial structures and think critically about what versions of the past we are sharing, valuing, and citing. How can historians do a better job of including Indigenous voices in our work, without appropriating knowledge?

As historians, change might also mean thinking critically about our concepts of time. Anishinaabe scholar Jim Dumont has argued that we exist in a 360-degree environment, a world in which the environment is interconnected, dynamic, and multi-relational. We cannot begin to explore the history of this land unless we are willing to look at different ways of understanding and communicating with the past.

Presenting Indigenous knowledge as something that is stuck in the past is a disservice and reinforces myths about dying Indigenous cultures. It is also imperative that knowledge is shared in respectful ways, based on the appropriate protocols and land connections dictated by individual communities and elders. We need to do better.

Krista McCracken is a settler scholar who lives and works on Robinson-Huron treaty territory, in the traditional homeland of the Anishinaabe and Métis. Krista is an Archives Supervisor at the Shingwauk Residential Schools Centre and an editor of Activehistory.ca

[1] I’d like to acknowledge and thank my colleagues at the Shingwauk Residential Schools Centre and Shingwauk Kinoomaage Gamig for their time and teachings as I continue to learn and rethink my own ways of knowing the past.