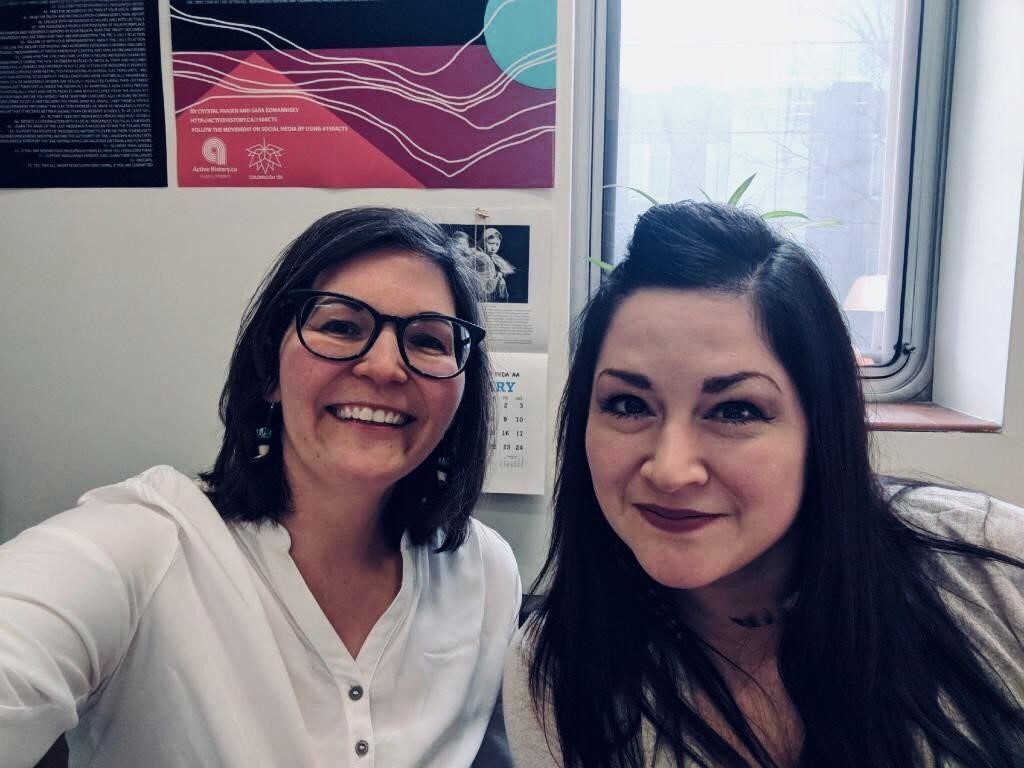 This post originally appeared in French on Histoire Engagée on June 7, 2018.  Many thanks to Andrea Eidinger for her work translating this post.

In the winter of 2018, I had the opportunity to teach HST2444, Autochtones, État et société au Canada at the Université de Montréal. Over the course of the entire semester, I relied extensively on media in both my classes and weekly discussions, including the poster series Remember/Resist/Redraw, and some of the short videos from Wapikoni mobile. Both proved to be extremely useful pedagogical tools that resulted in vigorous, and I would add, necessary, conversations about Canadian historical narratives. Towards the end of the semester, I had my students read the 150 Acts of Reconciliation, by Crystal Gail Fraser and Sara Komarnisky. Originally published on ActiveHistory (and later in French on HistoireEngagée.ca) in summer 2017, #150Acts listed out 150 acts of reconciliation that any Canadians could undertake in the last 150 days of the Canada150 celebrations. As Fraser and Komarnisky noted, the TRC’s Calls to Action were mostly aimed at institutions, and many Canadians did not feel that they applied to them personally. Instead, Fraser and Komarnisky wanted to illustrate that reconciliation can be practiced in different ways and at multiple levels.

Today I’d like to take this opportunity to reflect on my experience using this list in a classroom setting, and in doing so explain why I believe that it is such a valuable and useful tool for talking about reconciliation with students, regardless of the subject matter of the course.

Two Exercises for Reflection on Reconciliation

Even though I had required that students read the list prior to coming to class, I began the day’s discussion by distributing hard copies of it, and asking students to reread it and identify which actions:

A – were accomplished within the course

B – had already been completed by reading the list

D – they did not understand

E – they hoped to complete in the short or medium term.

I had several goals in mind when designing this exercise. Namely, I wanted my students to think critically about the material I covered in class within a larger social and political perspective. My students were able to see how much of the historical knowledge that was covered in HST 244 (for example, in actions #57, #60, #81 or #83[1]) would be required for the decolonization of traditional narratives of Canadian and Quebec history, a decolonization that is essential for true reconciliation with the Indigenous peoples of Turtle Island (North America). My students were both shocked, and frustrated, to learn about the many aspects of Canadian history that they had never been exposed to in their previous educational experience.

Reading this list in class also allowed us to discuss the relationship between history and the real challenges in mediating the relationship between Indigenous peoples and the descendants of settlers and immigrants in Canada (for example, consider action #29, on policing practices[2]).  Action #95[3], meanwhile, gave us the opportunity to talk about the issue of cultural appropriation and to understand current debates about what we had learned regarding nineteenth- and twentieth-century Indigenous performances. With action #138,[4] on the origins and question of blood quantum, we discussed the issues around Indigenous identity that we studied in the same session as the Powley and Daniels decisions (action #83).

Finally, and most importantly, reading this list opened a space for discussion around the fact that reconciliation was not simply about having good intentions (action #85), and, what’s more, “reconciliation is not about “feeling guilty.” It is about knowledge, action, and justice” (action #149).

I left the second exercise until the near end of class. By that point, I’d separated my students into teams of three, and asked each to complete one quick action: learning about the new territorial acknowledgement that the Université de Montréal had recently adopted (#1), learn about the debate over the Cornwallis statue in Halifax (#18) as well as those over places named after Langevin or Ryerson (#132), lear about the last Indigenous person to win the Polaris Prize (#67) and learn about one Indigenous athlete (#116). The students were given fifteen minutes to do their research, and then each team presented their findings to the rest of the class.

This little exercise resulted in discussions that were far more profound and robust that I could have ever anticipated. During the presentation on the territorial acknowledgement at the Université de Montréal, students analyzed and problematized the Quebecois historiography regarding Indigenous/French settler relations, and how this was echoed in the language of the acknowledgement. The debates regarding the Cornwallis statue, the Langevin building, and Ryerson University resulted in discussions about public history (action #97) and sites of commemorations (the issue of confederate monuments in the United States was also brought up). The diverse and complex discussions that resulted from this exercise made me realize that the #150Acts provided a framework around which to discuss reconciliation and settler colonialism, while also serving as a starting point for broader discussions about the problems facing the discipline of history itself.

Following this session, I compiled the lists created by the students in the first exercise, and I paid particular attention to those actions that were identified as “impossible or difficult to complete” as well as those “items they did not understand.” I noticed that the same few actions appeared multiple times. For instance, the various actions that required writing to one’s representatives or to police forces (#40, #42, #50 et #63[5]) were frequently identified as “impossible or difficult to complete.” In the following class, after reviewing some of the actions that many students had difficulty understanding (for instance, #26 or #113[6]), I asked my students why certain actions were characterized as difficult on their lists. This resulted in a discussion about democracy, human rights, and citizens’ responsibilities, a discussion which, to my mind, should be central in any history course.

The pedagogical potential of the #150Acts as laid out by Fraser and Komarnisky is immense. Its usefulness extends far beyond courses on Indigenous history alone; it is relevant, and even necessary, to any course on the history of Canada or Quebec. The list offers an excellent opportunity to discuss relations between Canadian settlers and Indigenous peoples. The list is also a extremely useful tool for critically considering reconciliation and responding to the TRC’s Calls to Action.

Further, I believe that this list has much to offer even outside of the field of Canadian history. As I’ve noted above, the list offers several concrete examples that pertain to some of the biggest issues facing the discipline of history today, particularly in relation to public history and the writing of history. This list is, without a doubt, an important tool for any history survey course. In fact, about that, I have plans for September 2018….

Catherine Larochelle is Assistant Professor in the History department at Université de Montréal. Her research interests are in cultural and transnational history of Quebec and Canada during the long 19th century, particularly with respect to education, childhood and critical race studies. Catherine is a member of the editorial team of HistoireEngagée.ca.

[1] The actions are as follows: #57: “Be aware that Indigenous people were restricted from voting in federal elections until 1960; #60: “Recall that First Nations people were forced to choose between maintaining their Status under the Indian Act and going to university or serving in the armed forces, and women lost their status by marrying a non-Indigenous person”; #81: “This year was the twenty-seventh anniversary of the so-called ‘Oka Crisis.’ What do you know about it?”; and #83: “Read about the Daniels Decision and why it is important.”

[2] “Educate yourself around the issue of carding and consider why this is an important issue for urban Indigenous populations.”

[3] “Consider the line between cultural appropriation and cultural appreciation. Chelsea Vowel has a good blogpost about this.”

[4] “Next time you want to talk to an Indigenous person about their background, try your best not to frame the discussion in terms of blood quantum (i.e. how “much” Indigenous or white blood they have). Instead, ask what community they belong to and learn the name of their people.”

[5] The actions are as follows: #40 “Write your local councillor, MLA, or MP about the flying of Indigenous flags at local, provincial/territorial, or federal buildings.”; #42 “Write a letter to your local RCMP Officer in Charge or local Police Chief to inquire about how the police force is actively engaged in fostering connections with local Indigenous communities. If they are not doing so, ask that they start”; #50 Write to your municipal, provincial, and federal representatives and ask them how they are implementing the Calls to Action”; and #63 Write to Prime Minister Justin Trudeau and ask that the government implement the promises he made to Indigenous people in the 2015 election.”

[6] Action #26: “Invite your local reconciliation organization to hold a KAIROS Blanket Exercise at your place of employment;” action #113: “Start your own Heart Garden with messages of support for residential school survivors.”

2 thoughts on “Reconciliation in the Classroom: The #150 Acts as a Pedagogical Tool”