This is the fourth of several posts marking the 75th anniversary of D-Day and the end of the Second World War as part of a partnership between Active History and the Juno Beach Centre. If you would like to contribute, contact series coordinator Alex Fitzgerald-Black at alex@junobeach.org.

By Stephen A. Bourque

While gathering material for my recent Beyond the Beach: The Allied War Against France, I was surprised at how little attention historians have given to the Allied aerial bombardment on D-Day. My focus on that project was not to evaluate the various air forces’ effectiveness in doing military tasks, but to explore the effects of bombing on French society and its infrastructure. I assumed that, given Royal Air Force (RAF) Bomber Command and the US Eighth Air Force’s recognized abysmal performance, some enterprising writer would have spent some time explaining to the public what happened. 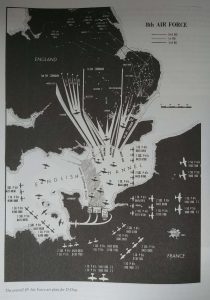 The overall US Eighth Air Force plan for D-Day. Juno Beach was targeted by bombers from the 1st and 3rd Bombardment Divisions. Image from Ken Delve, D-Day: the Air Campaign

Not before, or since, has there been more aircraft in the sky than on June 6, 1944. Over 3,200 heavy bombers and thousands of medium bombers and fighter bombers attacked targets from Cherbourg to Cabourg. Most figures indicate that, including troop transports, there were over 14,000 sorties in the Norman skies that day. On four out of five beaches, Utah being the exception, this massive effort was remarkably ineffective. What surprised me was, other than some apologetic equivocation in the British and American official histories and complaining by army historians about the bombers missing the target, most writers have generally ignored the topic.

In the Juno Beach sector, what was supposed to happen was a three-phased operation. First came Operation Flashlamp, the largest Bomber Command action to that point in the war. Air Chief Marshal Arthur Harris, commander-in-chief of Bomber Command, sent over 1,100 Lancasters, Halifaxes, and Mosquitoes against the most dangerous artillery batteries that threatened the fleet’s transports and supporting guns. Closest to Juno Beach was the Mont Fleury Battery, near the town of Ver-sur-Mer. Neptune planners believed that the four 122 mm guns, captured from the Soviets, could interfere with the landings on both Gold and Juno Beaches. However, they were in unfinished casements and not yet ready for operations. One hundred and fourteen heavy bombers arrived over the battery at 0429 hours. In twenty minutes, they dropped 542 tons of bombs on the four unfinished gun positions, causing no damage to the guns themselves.

Attacking behind Bomber Command, the Eighth Air Force had responsibility for “neutralizing the beach defenses.” These included the many casements and strong points the Germans had scattered along the beach. Altogether 1,254 American heavy bombers attacked the four landing beaches in Calvados. There was only a slight possibility they would hit any of the targets, however, as someone – and we have no idea who – decided to delay dropping the bombs by between five and thirty seconds, based on the target. Supposedly, this delay intended to limit casualties among the friendly landing forces. But it also limited the damage it could do to the German defenders and their heavy weapons, ensuring they were ready when the Allied infantry arrived.

D-DAY – BRITISH FORCES DURING THE INVASION OF NORMANDY 6 JUNE 1944 (CL 3947) Aerial oblique photo of the junction of King Red and King Green beaches, Gold assault area, during the landing of 50th Infantry Division, 6 June 1944. The Mont Fleury battery (WN 35a) and an anti-tank ditch are visible in front of the village of Ver-sur-Mer. Copyright: © IWM. Original Source: http://www.iwm.org.uk/collections/item/object/205023606

Tragically, the ground commanders knew nothing about this change, and their soldiers would pay the price. Planners split the Juno Beach targets between two bomb divisions. Major General Robert B. Williams’ 1st Bomb Division attacked the towns and villages near Gold Beach, the objective of the 50th British Division, and the western portion of Juno, where the 3rd Canadian Division would land. He also sent another 20 squadrons, 125 aircraft in all, back to Mont Fleury near Ver-sur-Mer. The fishing and pre-war tourist village of Courseulles-sur-Mer and its resistance nests merited sixty bombers. Major General Curtis E. LeMay’s 3rd Bomb Division was to suppress and destroy German military emplacements on the eastern portion of the invasion beaches, half of Juno Beach and Sword Beach, opposite the approaches to Caen. In the 3rd Canadian Infantry Division sector, these included the machine gun and light artillery positions at Bernières-sur-Mer and Saint-Aubin-sur-Mer. Because these villages were on the coast, most of the bombers missed the defenses, the remains of which one can still see along the beach today. Landing Canadian infantry found none of the bomb craters they expected after such a massive assault.

Finally, behind the American bombers, the naval task force arrived escorting the landing craft. Off Juno Beach, the bombarding ships were the HMS Belfast and HMS Diadem, both light cruisers, which fired from the sea at the German artillery shooting at the landing forces. But it was a light effort, as Juno Beach received the least support of any of the invasion beaches. From the Canadian infantry perspective, the bombardment from air and sea was worthless. As the Royal Winnipeg Rifles recorded in their war diary: “The bombardment having failed to kill a single German soldier or silence one weapon, these companies had to storm their positions cold, and did so without hesitation.”

While the bombs may have missed the designated targets, they managed to hit the homes of French civilians who lived in the Canadian landing sector. The Eight Air Force’s targets 14 and 15 were German Strong Point 29 (Wiederstandnest 29), at the entrance to the harbor of Courseulles-sur-Mer. A tourist resort and small seaport, it usually had a population of a little more than 1,100, but in 1944 it was probably much less. The bombs that missed the defenders hit the main village. As Charles Lamotte, a resident, remembered thirty years later:

It was daylight when a constant roar echoed with crackling, hissing and explosions. I realized it was a barrage. Undoubtedly many warships watered the ground. The crash faded, then suddenly went out. Not for a long time. He resumed with violence that seemed to be increased, then ceased again. At the third salvo, I thought it was the end. Tiles fell in the courtyard; the door and the window of the hall were torn from their hinges. A cloud of pungent smoke fills all the rooms. I remember seeing that cow running down the street at a gallop, mooing with terror.

As Canadian infantrymen arrived in the partially destroyed town, local civil defence workers recovered the bodies of fourteen civilians, including George (38) and Bernadette Labreque (34), and their three-month-old daughter Elizabeth.

Bernières-sur-Mer, in the centre of the Canadian sector, contained Wiederstandnest 28, LeMay’s target 17. Like everywhere else that morning, his bombers missed the Germans but hit the French, killing twenty-seven of the small village’s less than 800 residents. Included among the dead were most members of the Adolphe and Jeannette Boitard, Joseph and Émilia David, Théophile and Marie Huet, and Eugénie and Jules Lequesne families. The records all list the cause of death as “bombardment aérien.”

Like the other towns on the stretch of the coast, Saint-Aubin-sur-Mer, on the Division’s left flank, contained a German strongpoint, Wiederstandnest 27, target 18 on LeMay’s hit list. Difficult to reach by ground, the North Shore Regiment and No 48 Commando had a tough fight since the defences remained intact after the bombing and shelling. Again the bombs hit the village. Twenty-five of the villagers perished under the Eight Air Forces’ misdirected bombs. We should also remember that the morning’s attack by Bomber Command on the Mont Fleury Battery was also extremely inaccurate in regards to the target, but not to those who lived in the small village of Ver-sur-Mer. Before the first Commonwealth soldier landed on Juno Beach, this village had already suffered eleven dead and dozens wounded. 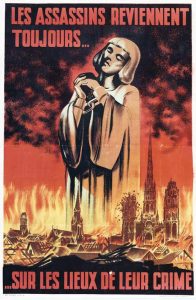 A propaganda poster commissioned by the Vichy French government to galvanize resentment agains the Allies. Joan of Arc kneels in prayer, her hands manacled, while below her the town of Rouen burns. The text reads “Assassins always return to the scene of their crime”. Musée du général Leclerc de la Libération de Paris – Musée Jean Moulin

For those who have written about the 3rd Canadian Division, there is nothing to report about the bombardment, other than the air forces missed their targets, forcing the infantry to take on the German defenders without the assistance they had expected. The scope of French civilian casualties on the invasion beaches, as a result of the air and sea bombardment, is not something most interested in the D-Day invasion have considered. As we commemorate the seventy-fifth anniversary of the attack, we should pause to consider the ineffectiveness of the preliminary bombardment, the price paid by the infantry in capturing positions that the air force should have neutralized, and the approximately 100 French men and women killed by these misplaced bombs.

Stephen Bourque left the US Army in 1992 after twenty years enlisted and commissioned service. After receiving his Ph.D. at Georgia State University, he taught European, American and military history at several colleges and universities. He currently teaches with the Norwich University Military History Master’s Degree program and is Professor Emeritus of Military History at the School of Advanced Military Studies, Fort Leavenworth, Kansas. He is the author of Beyond the Beach, the Allied War Against France (2018), also available in French as: Au-delà des plages. La guerre des Alliés contre la France.