As Indiana Jones, Harrison Ford has come to embody the archaeologist on film. Why hasn’t he done the same for, or to, historians? In Patriot Games (1992), the actor plays Jack Ryan, a professor of naval history who thwarts an assassination attempt in London. The movie is based on Tom Clancy’s novel, an early entry in the – God help me – “Ryanverse” series of 29 books, including 12 written by other authors after Clancy’s death.

The reason we don’t think of Ford as a historian – besides the fact that he played Indiana Jones in a string of hits, and Indy is wicked cool – and the reason you didn’t even remember that his Patriot Games character was a historian, is that we hardly see him historying. No time in archives, no microfilm reading, no evidence of shame about an overdue manuscript. Just brief glimpses of him giving a lecture and holding a seminar, Samuel L. Jackson warning that he might “become part of history rather than a teacher of it,” and that’s it.[1] 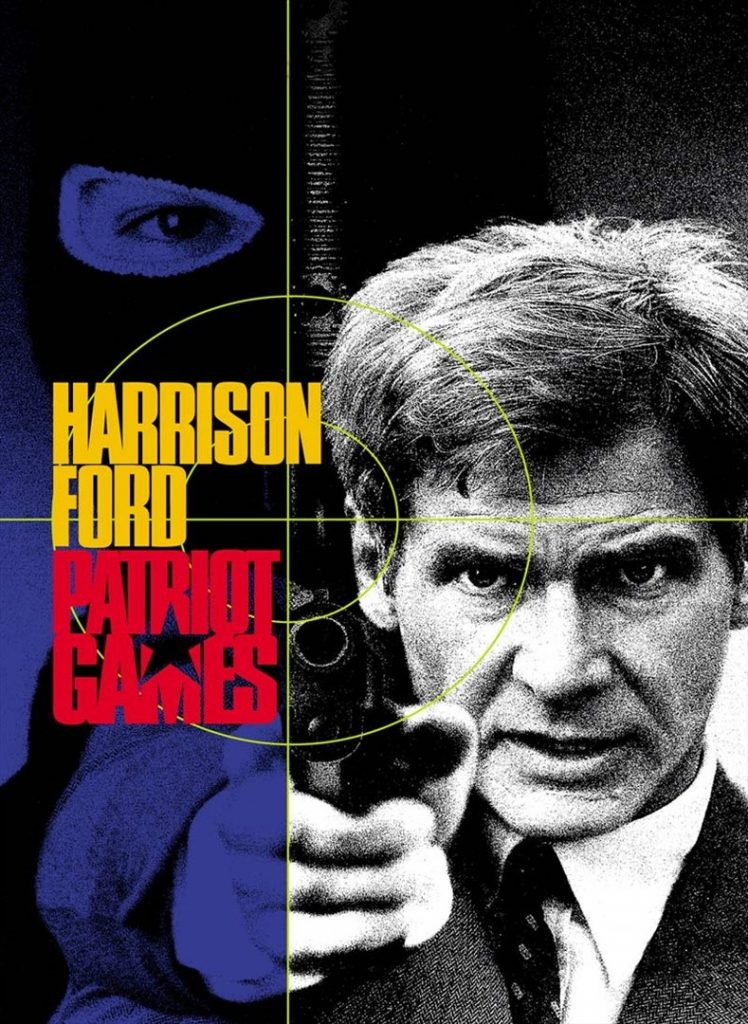 Jack Ryan’s career as a history professor plays a prominent role in the early novels. In The Hunt for Red October (1984), the first book in the series, it is mentioned repeatedly that Ryan received his doctorate in history at Georgetown and now teaches at the US Naval Academy.[2] His being a historian is more central to the follow-up prequel Patriot Games, published in 1987. It is explained that he is in London to vacation with his family, but also to slip in a research trip. He spends three hours “reading over faded carbon copies of naval dispatches and taking notes,” breaks for lunch and a beer, returns to work for an hour, and that’s it, his research is done. If that’s not historian behaviour, what is?! There’s also a great scene in which the Yank shows off his “field computer” to three British bobbies. They circle it like the apes circling the monolith in 2001, oohing and ahhing at its “typewriter-style keyboard,” its password-protected entry, its two megabytes of memory – “enough for a whole book.”

But beyond providing an admittedly limited peek into historical work, the book Patriot Games is notable for its affirmative take on the historical profession specifically and academe generally. True, the villain calls Ryan a “bloody academic” and a would-be CIA recruiter says, “It’s just a damned shame to waste him teaching history.” But at least fifteen times throughout the book, Ryan defines himself as a historian and defends himself from attempts to be lured away to become a spy:

“I teach history, remember, I don’t make it.”

“I teach history. My office is in Leahy Hall on the Naval Academy grounds. That’s kind of a long way from Langley.”

“Why don’t you ask the State Department? That’s not my part of the world, remember? I teach naval history.”

Harrison Ford in Patriot Games, demonstrating how both teachers and Harrison Ford have made careers out of pointing.

And so on. It’s true that Ryan holding off recruiters provides some of the book’s dramatic conflict, and it’s also true that Clancy is a famously repetitive author. But his respect for his protagonist’s profession reads as sincere. And I like that Clancy continually states Ryan “teaches history” rather than is a “professor” or “doctor,” in the same way that I like it when colleagues talk about heading in to “school” rather than “work.”[3]

Tom Clancy was only following in the footsteps of other genre writers of the era who saw the potential of professorial protagonists. Consider Trevanian’s The Eiger Sanction (1975), said to have been a spy spoof gobbled up by readers as the real thing. Its protagonist is Jonathan Hemlock, an art professor – seemingly, an art history professor – who doubles as an art collector, triples as an internationally respected mountain climber, and quadruples as an assassin. Clint Eastwood directed and starred in the film version. Yes, Clint Eastwood plays an art professor. The film, like the book, opens with Hemlock giving the last lecture of the school year. He squints,

Some of you will continue with your education. Some of you, I hope, will continue with your interest in art. Some of you will have other interests, other talents. If we’ve learned nothing else this year, I hope you’ve learned the stupidity of the statement that art belongs to the world. ‘Cause art belongs to the cultured who can appreciate it. The majority of the great unwashed does not fit into this category. And neither, I’m sorry to say, do most of you.[4]

The bell rings. (The bell?) Students cheer. (Cheer?) As nice as it would be to imagine that such books and movies favour faculty because of our presumed wisdom and erudition, they also like that professors by definition profess. And they like our proximity to young attractive people and our power over them. Immediately after Hemlock leaves the classroom, there is a deeply sexist scene between him and a young female student. (Of course, this is a staple of more than just spy fiction. Professors sleep with students in Disgrace, The Corrections, The World According to Garp, Friends….)

But the master of the professor-in-peril genre was Robert Ludlum. My 1980s were spent reading a string of his books in which, in memory at least, the hero is invariably a history professor in a small northeastern college whose life is turned upside down when a computer in a shadowy government agency spits out his name as the person with the requisite foreign policy background, facility with language, and general derring-do to stop a potential nuclear threat in Badguyistan. As is said of the titular character in The Matlock Paper (1973),

“Jesus! Are those his qualifications? Where does he start asking questions? At faculty teas for retired professors?”

“No. That part of it is all right; he’s young enough. His qualifications are included in what Security calls ‘flawed but mobile in the extreme.'”

Flawed but mobile is a good description for a professor. But one gets the sense in Ludlum’s books, as in Trevanian’s, that the mobility part is especially convenient: the presumed flexibility of academic life means the hero can be parachuted into Vladivostok on a moment’s notice. In any case, Ludlum did not generally trouble himself with accuracy in his portrayal of academic life. In The Chancellor Manuscript (1977), the lead is a history graduate student whose completed dissertation is rejected by his committee by an 8 to 1 vote. “Twenty four months lost, thrown away into academic oblivion! Two years of his life!” But our plucky Chancellor rewrites it as fiction, and becomes a famous novelist. Alt-ac, kids, alt-ac.

Re-immersing myself in these works, it’s impossible to escape the cringy thought: were they a little bit formative? Was my teen self persuaded to become a historian, a scholar in some small part by the cheesy, sexist, racist, right-wing romance of this airport literary genre and its action-hero cinematic cousin? That sounds terrible. And yet it also sounds terrible that young viewers and readers have access to even fewer historian pop-culture role models than I did. Historical research and writing does not translate well to the screen at the best of times. It tends to be individual, internally focused, and static, so it is easy to choose to cut. (Clancy’s 200,000-word Patriot Games novel became 5500 words of movie dialogue.) But in recent decades, the culture has moved away from thinking of intellectuals, scholars, humanists, historians as credible potential heroes. Or at least not action heroes: we might, if lucky, be cast as Q, but never Bond. In the new Jack Ryan reboot series on Amazon Prime, the protagonist still has his doctorate – but it’s now in economics, not history. Worse, in a series about American power and global politics, no character in the first season even says the word “history.”

Alan MacEachern teaches a “History at the Movies” course, as well as Canadian, environmental, and climate history, at Western University.

[2] All references to books in this post come from epubs, so no page references can be provided.

[3] Clancy did a deeper dive into Jack Ryan’s historical writing in Red Rabbit (2002): “His language was literate … but not particularly elegant. In his first book, Doomed Eagles, every bit of artistic language he’d attempted to put into his manuscript had been edited out, to his quiet and submissive fury. And so the few critics who had read and commented on his historical epic had faintly praised the quality of his analysis, but then tersely noted that it might be a good textbook for academic students of history, but not something on which a casual reader might wish to waste his money. And so the book had netted 7,865 copies sold—not much to show for two and a half years’ work….” Not if you’re Tom Clancy, at least.

[4] The lecture is more pretentious but less condescending in the book.