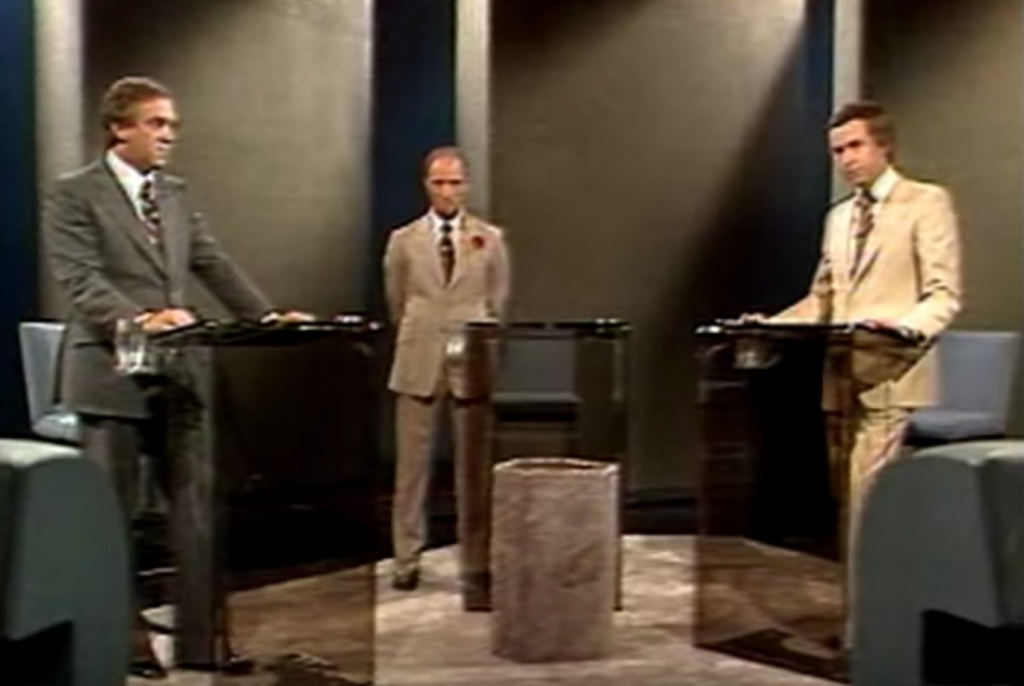 Editor’s Note: This post is the third in our special series on elections.

Energy taxes. Housing affordability. Deep regional divisions in Canada, exacerbated by the first-past-the-post electoral system. Oh wait, you mean we’re talking about 2019, and not about the pair of federal elections from forty years ago? This election season is offering us a great deal to contemplate, both in terms of policy issues we have seen before as well as enduring issues around electoral reform.

“Well, welcome to the 1980s!” declared a triumphant Pierre Trudeau on the night of the February 18, 1980 election.[1] Just two months earlier, Trudeau had been headed into political retirement after his government was defeated in the election of May 22, 1979.  The 1979 election delivered a win to the Progressive Conservatives led by Joe Clark, who, at age 39, became Canada’s youngest ever Prime Minister – a record even this year’s youthful crop of leaders will be unable to beat. But Clark had been held to a minority government, winning 136 seats, six short of what he needed for a majority. That shortfall would prove fatal to the longevity of his government. The fall of the Clark government and the results of the following election marked a key turning point in Canadian political history, shutting down important new policy directions, opening the door to others, and highlighting the deep structural problems of our first-past-the-post electoral system.

The 1979 and 1980 elections, which should really be thought of as an intimately-connected pair, were held nine months apart; the shortest distance between two federal elections in Canadian history.[2] These election campaigns were thoroughly analyzed in Globe and Mail columnist Jeffrey Simpson’s Governor General’s Award-winning book Discipline of Power: The Conservative Interlude and the Liberal Restoration.[3] But the substance, structure and consequences of these elections, and the circumstances that prompted them, have been more important to our present-day politics than Simpson recognized in 1980.

Consider what happened with the May 1979 election. Despite the machinations of a hostile and macho press corps that had saddled Clark with the moniker “Joe Who?”[4] and crafted an image of him as a weak leader at least in part because he defended his wife’s – Maureen McTeer – decision to keep her last name, he had managed to bring his party back into power for the first time in sixteen years. A moderate progressive conservative in the Robert Stanfield tradition, Clark had made major efforts as an MP and party leader to open the party up to young people and women, and tried to lead by example on the issue of openness to Quebec and French Canada by becoming bilingual himself – no small feat for a man born in High River, Alberta. And yet, despite fervent campaigning efforts in Quebec featuring both Clark and the fluently bilingual McTeer, the Tories only won two seats in the province. Conversely, the Liberal seat tally in the entirety of Western Canada was three.

From our 2019 vantage point, it is absolutely striking how the 1979 Clark government, and the budget that brought it down, were marked by issues of the environment and energy. One of Clark’s first major tasks as Prime Minister was to attend the G7 summit in Tokyo. Energy use was high on the agenda, and the leaders agreed that “the most urgent tasks are to reduce oil consumption and to hasten the development of other energy sources.”[5] Energy conservation was the watchword of the G7 communiqué, and it strongly informed the 1979 budget presented by Finance Minister John Crosbie, which had a centerpiece of an 18 cent-per-gallon gasoline tax, which had the twin goals of reducing the deficit and encouraging energy conservation by Canadians. A partial tax rebate for lower-income Canadians was slated to be phased in over subsequent years.

This was a fuel tax being proposed by a Progressive Conservative government to reduce Canadians’ energy use. And it was defeated by a vote on a sub-amendment to the budget motion, proposed by NDP Finance critic Bob Rae, and backed by a full-court press of the Liberal caucus. A budget defeat is automatically considered a vote of non-confidence, and the government fell the night of December 13th.[6] As we consider the debates around carbon taxes today, we need to remember that this was once proposed by a conservative federal government. It certainly highlights how different the Conservative Party of Canada of today is from the Progressive Conservatives of the 1970s and 1980s. Had Clark’s government survived that budget vote, Canada might have been set on the path of tax measures to promote energy conservation far earlier.

Consider as well what those elections meant for Pierre Trudeau and the Liberals. In 1979, Trudeau was a deeply unpopular Prime Minister, the economy mired in stagflation. He had reversed his election promise on wage and price controls in 1975, and in 1978 slashed government expenditures across the board, including significant cuts in transfers to the provinces. Had the 1980 election not happened, Trudeau would not have faced the Parti Québécois in the Quebec referendum on sovereignty-association, nor managed to create his signature legacy, the Charter of Rights and Freedoms (nor would he have patriated the constitution without the assent of the Quebec government, but that’s another legacy altogether). The Pierre Trudeau legacy owes much to what happened in his final term.

As we enter yet another first-past-the-post election, we also need to consider how these elections of 1979 and 1980 demonstrated how our electoral system both amplifies and distorts regional differences. The Liberal Party won only 3 of 77 provincial seats of the west of the Ontario border in 1979. They won 2 in 1980, and still formed a majority government. And yet, their share of the popular vote in these provinces ranged from 21 to 23% in 1979, and from 22 to 28% in 1980. The Progressive Conservatives won only two of Quebec’s 75 ridings in 1979, and 1 in 1980, despite a vote share of 12.6-13.5% in those elections.  Clark’s PCs won the 1979 election with a significantly smaller – although better nationally-distributed – share of the overall vote than was garnered by the Liberals. The Ed Broadbent-led New Democratic Party won barely half as many seats in those elections than its vote share would have warranted.  Canada was well on its way to the deeper political fragmentation and regionally-divided parliaments of the 1990s but these signs of the structural problems with the electoral system were ignored.

Elections do matter. And electoral systems shape their outcomes in profound ways. The 1979 and 1980 elections offer us a great deal to contemplate, including the long history of environmental politics in Canada as well as the problems with a first-past-the-post electoral system such as ours.

Matthew Hayday is a professor of Canadian political history at the University of Guelph – and at the time of writing this post, he was an undecided voter who was nonetheless committed to casting a ballot on October 21. He is currently working on a SSHRC-funded biography of former Prime Minister and cabinet minister Joe Clark.

[2]This narrowly beats out the gap between the elections bracketing the King-Byng affair, and Diefenbaker’s first and last governments of 1957-58 and 1962-63.

[4]This was the Toronto Star banner headline the day after the 1976 PC Party leadership convention. The nickname was quickly adopted by other columnists – and resonates to this day.

[6]Canadian playwright Michael Healey’s recent play 1979, centered on the run-up to the budget vote, explores how this may have been a crucial turning-point in Canadian politics. Michael Healey, 1979 (Toronto: Playwrights Canada Press, 2017).