We’ve all heard it: History is boring.

A quick Google Image search suggests that both perspectives may be correct! Not only does history look boring and serious, it also looks White, Wealthy, Masculine, and Antiquated (okay: White, Male, and Stale). No wonder history has a reputation problem! 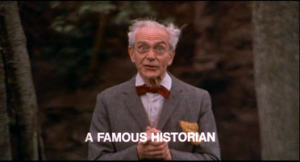 Frank, the Famous Historian. Does he represent us all?

Good news for historians: 2020 is proving itself to be quite a serious year. Perhaps it will turn out to be the year of the historian (Everything is coming up Milhouse!).

The other day, though, as I ventured forth from my haven of seclusion into our COVID filled world, I realized (just now!) that this image of the historian is wrong.

In response to this image of the historian, some might say that challenge ought be made to the problematic racialized, gendered, and class norms it presents, but on this day – for it was sunny – a more pressing issue crossed my mind: history isn’t always boring and serious, it can also be funny.

I wish I could claim originality for this idea, but the seed was planted after reading James Axtell’s 1989 keynote address to the American Society for Ethnohistory: “Humour in Ethnohistory.” (I only keep up with the most current trends in historiography!)

There, Axtell reminded his audience: “Since the characters of the past were fully human, they were downright funny some of the time… They found each other funny, and we find them funny.” (86)

His words have stuck with me for nearly two decades since first reading this essay.

One of his best anecdotes is an account of the early Atlantic fur trade. Recounted in 1524 by Giovanni da Verazzano, an Italian sailing for the French crown, he described this grand finale to a complicated day of trading with the Narragansett: “when we had nothing more to exchange and left them, the men made all the signs of scorn and shame that any brute creature would make such as showing their buttocks and laughing.” [click here for the full text] A good sign their relationship was waning.

There are other interesting examples from the past.

I use this wood cut (available at Walmart for $50!) from Thevet’s chapter on Newfoundland and the Isle of the Demons in Cosmographie Universelle (1574) when I teach the early fisheries. Yes, there is a lot it might tell us about such subjects as gender, work, social life, and conceptions of the sea, but I always get a kick out of the bagpiper and flag bearer standing on the fish’s head. Most of the people in the picture are hard at work, but these two seem to be having a jolly old time. This has a Monty Python sketch written all over it!

Where bagpiping at work may not be relatable (at least for some readers), many accounts from the past resonate with our own experiences.

Anyone who has taken kids on a canoe trip, for example, might find familiar this exchange between a New England ship’s captain and his Wendat captors. Travelling up to Quebec from Nova Scotia in 1744, the Captain, William Pote, lamented: “my master was something out of humour.  He insisted I did not sit steady in the canoe. I told him I sat as still as I possibly could. He told me it was false. At which I grumbled a small matter, & had like to had my head broke…” (68)

While Pote rocked the boat, others, like those Narragansett fur traders, knew the importance of swift timing. During an election speech in 1863, for example, Canada’s soon to be first Prime Minister, the heavy drinking John A Macdonald, supposedly threw up on the hustings. Without losing a beat, he claimed “I get sick … not because of drink [but because] I am forced to listen to the ranting of my honourable opponent.” I haven’t been able to source this properly – beyond the internet – but it feels right, so it must be true! (A good citation in the comments would be appreciated!)

In any case, the historical record is full of humorous moments that bring a smile to our face.

So, today, in this vein, I’d like to challenge my fellow historians – as we settle into our socially distanced reality – send us your humour.

Prove to us that a Google Image search does not accurately define our reality. Share with us those funny moments from the archives or anecdotes about the past that make you laugh.

Over the coming weeks, we’ll run your submissions in the hopes that it brings some joy to these otherwise dark times.

Submissions can be sent to me at tpeace[at]uwo.ca.

2 thoughts on “History’s Reputation Problem: The Sequel, History isn’t Humourless, is it?!?”