We often think of academic research as backward-looking. It documents the past, collecting data on lived experiences. While working with the Canadian Museum for Human Rights (CMHR), our SSHRC-funded (Social Sciences and Humanities Research Council) partnership—Conjugal Slavery in War: Partnerships for the study of enslavement, marriage and masculinities (CSiW)—disseminated research in creative ways. Mobilizing this research and lived experiences as “active history” is forward-looking. It brings the data to life and reaches new, diverse audiences.

The “Ododo Wa: Stories of Girls in War” temporary exhibit curated by Isabelle Masson of the CMHR and the travelling version of the exhibit are grounded in the experiences of Grace Acan and Evelyn Amony. Acan and Amony both survived abduction by the Lord’s Resistance Army (LRA) in Uganda in the 1990s. They are now researchers and activists in northern Uganda, who collaborated closely with CSiW and the CMHR on “Ododo Wa.” The exhibit brings to life their experience of captivity and forced conjugal unions in a manner that informs visitors and transforms their understandings of women in war. The effective development of an exhibit of this nature necessitates mindful choices of focus, narratives, artefacts, images, and videos; the building of meaningful relationships of trust among all involved and the planning of nuanced communication methods in diverse sites is also vital.

The CSiW collaborative research project began in the Coalition for Women’s Human Rights in Conflict Situations, which monitored the prosecution of gender crimes before international criminal tribunals in the late 1990s and early 2000s. The Coalition facilitated the conference, which resulted in the Nairobi Declaration on Women’s and Girls’ Right to Remedy and Reparation in 2007. When, in 2008, the Special Court for Sierra Leone found forced marriage to be a crime against humanity, the CSiW project was born. Partners in Liberia, Sierra Leone, and Uganda, among others, wanted to learn more about the experiences of women who were referred to as “forced wives” in Uganda or “bush wives” in Liberia and Sierra Leone. Our key research questions included: What are the ongoing needs of women who returned from captivity and those who returned with children? What responsibilities did their governments have to redress the wrongs done to them and help them rebuild their lives? What legal and political strategies were most effective in achieving these goals? 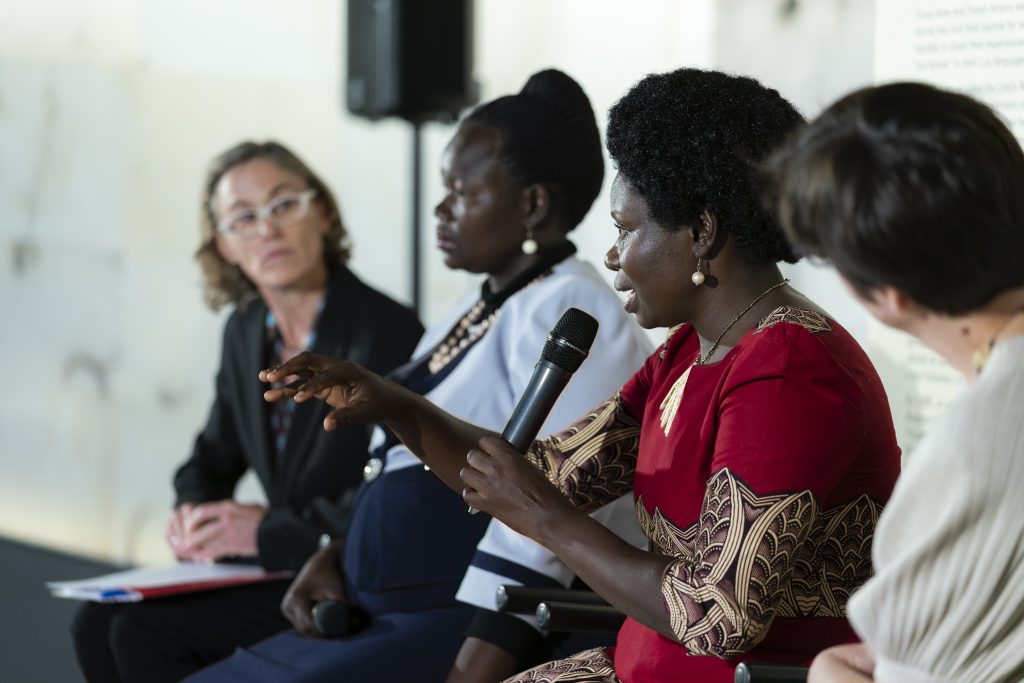 At the same time, Acan and Amony were working with other women on a storytelling project. They had formed the Women’s Advocacy Network (WAN) “to promote social justice and realize economic security of its 500 members, who are all war-affected women, men and children.”[i] Through these long-term collaborations and partnerships, CSiW is motivated by feminist values including the importance of community advocacy, nuanced conceptions of justice, reparative supports, and sensitive means of sharing difficult experiences to effect political change.

In 2016, CMHR curator Masson came to Toronto to meet with CSiW partners. Here, we started a discussion on how best to communicate the complexity and the urgency of the issues around reintegration for women and girls who had been abducted for forced marriage in conflict situations. For me, it was also the beginning of a personal process of thinking through and with artefacts; it was also the start of letting go of a particular focus on the socio-legal issue of conjugal slavery in favour of focusing on broader issues.

Looking back on the minutes from that meeting in 2016, I am reminded that we discussed whether this should be an exhibit about our project or about individual stories. As academics working in CSiW, our craft is words and documentation. Masson would often stress the importance of artefacts and mediums for storytelling. The choice of the eight artefacts you see in the “Ododo Wa” exhibit and the audio-visual assets representing Acan and Amony’s personal narratives spark discussion about broader structural issues without focussing on violence or victimization.[ii] Mobilizing research through museum exhibits, then, can mean giving up an academic attachment to words and particular scripts.

Research and knowledge mobilization is an important goal of our CSIW project. We seek to use our documentation for positive social change and impact. But it can be difficult to get victim-centred research in front of policymakers and politicians responsible for putting in place the relevant policies. With our partners, we disseminate research through writing academic papers or briefs, petitioning the government as WAN did in Uganda,[iii] and through creative outputs like the “Ododo Wa” exhibit as well as community dialogues, podcasts, video interviews, and blog posts. These all allow us to engage with a broader audience about the ongoing needs of survivors.

One of our central objectives is to urge governments into reparational action. This means not only getting communities involved, but bringing attention to the matter at hand on a larger scale. The soft power exerted through “Ododo Wa” documents the prolonged suffering of survivors in post-conflict situations. It foregrounds survivors’ advocacy exposing the Ugandan government’s failure to respond and take concrete action to redress these serious wrongs it failed to prevent.

At the launch of the exhibit in Winnipeg and during a talk at the University of Manitoba in October 2019, Acan and Amony explained the longstanding issue regarding a petition that they, together with a group of survivors, brought to the Ugandan parliament in 2014. Acan concluded one of her talks during the events for the exhibit launch with these pressing words:

How long will it take for the transitional justice policy to come out and be implemented so that we can save [children’s] lives. And the kids, the children are growing. They need to go to school. They are of age to go to school, so how long do we have to wait?

It is critical that the government respond in the near future, as there remain people who are at present suffering from psychological and physical injuries; who are failing to earn a living due to an incomplete or total lack of education; and who are experiencing prolonged stigmatization. As Amony stresses, “The women who were abducted as girls returned as women and they had not completed their studies. They face challenges in just finding means of livelihood.” She and Acan both noted the stigma that children referred to as “born in the bush” may also suffer from their extended families, teachers, or the broader community. 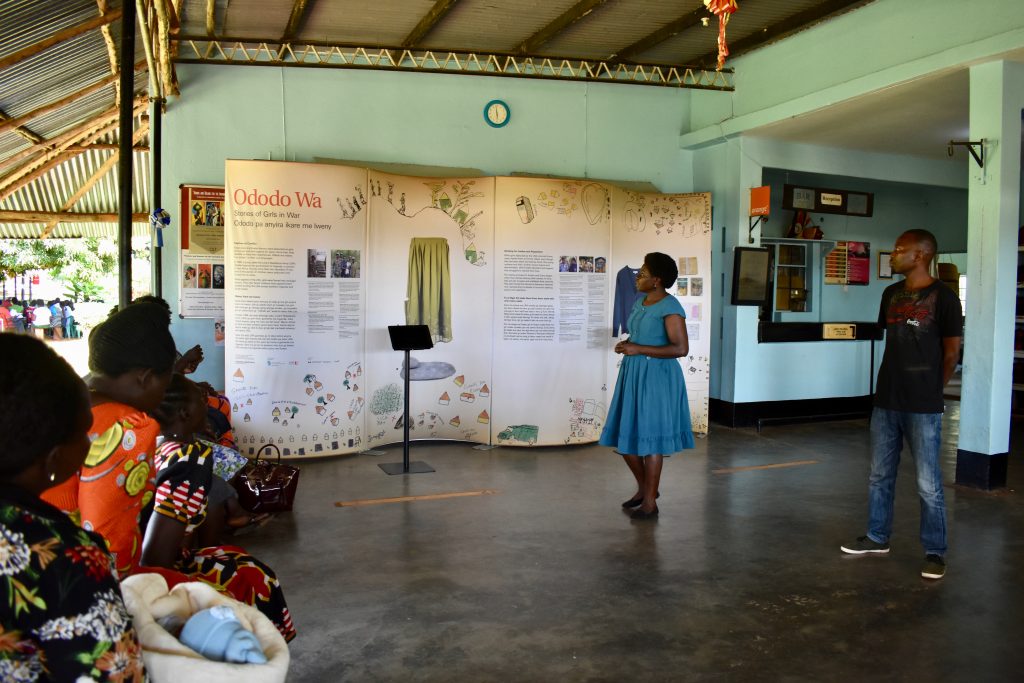 About justice and healing

In developing the exhibit and sharing their stories, Acan and Amony advocated for an expansive view of justice and what it really means to survivors. They posed significant questions regarding specific needs that transcend official apologies and judicial proceedings. Amony’s amnesty certificate is displayed in the exhibit. It points to debates about impunity and responsibility, as well as gender justice beyond criminal trials.

This exhibit was designed with a mindset focussed on the act of sharing. This is not only meant as a way to foster tangible developments, but to promote holistic healing among the communities, as well, so that they might find the resources and strength to move forward. It is the courage mustered by Acan, Amony, and other survivors through this process of sharing their stories, with their voices, and finding healing together that made it possible for this exhibit to travel, reach out to the world, and carry a message of hope beyond Winnipeg. By expanding both our conception of justice and the ways we engage with different communities, our hope is that the telling of Acan and Amony’s stories inform viewers, transforms dialogues, and helps inspire meaningful change.

Dr. Annie Bunting is an Associate Professor of Law & Society at York University and Director of the SSHRC-funded Partnership, Conjugal Slavery in War: Partnerships for the study of enslavement, marriage and masculinities. Patricia Trudel is a Masters student in Social Anthropology at York University, working with the Conjugal Slavery in War research project.