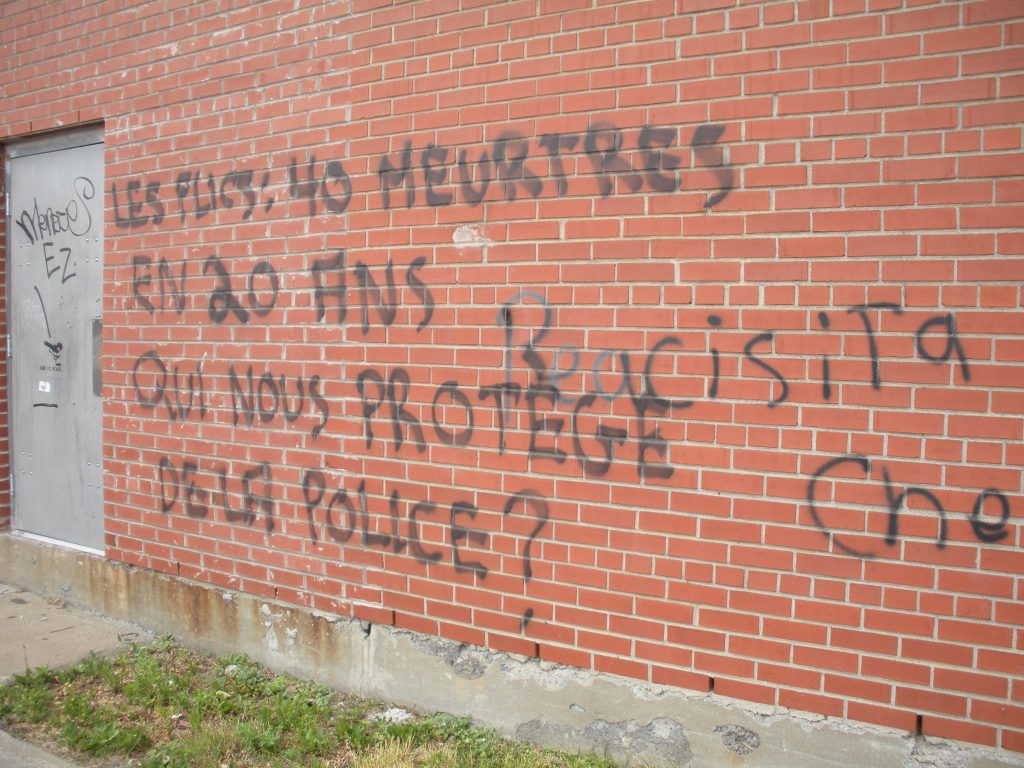 Graffiti in Montreal, Quebec. Photograph courtesy of the author.

Amidst the call to “Defund the police,” it bears thinking about removing police from our schools as well.

“Defund the police” has become the rallying cry of anti-Black racism protests following the public murder of George Floyd by a Minneapolis police officer. Relentless police violence has generated heated discussion about how decades of policies intended to “reform” police operations have failed to eradicate racist and criminal actions against people of colour. For some, defund the police is a slogan that invokes tearing down a hypocritical public service – an armed and dangerous part of the state that targets Black, brown and Indigenous people. At its base, the movement to defund the police recognizes that police forces come at huge public expense, especially with the militarization of police practice, often to the detriment of social, educational, and medical services, those things that are actually needed most in oppressed and precarious communities across North America. The ‘one bad apple’ argument – that rogue individuals are responsible for police violence – is indefensible, ignoring as it does the systemic racism endemic to modern policing.

Haleluya Haila, a grade 11 student from Burnaby, BC, knows this. In the midst of a growing movement against police violence, she persuasively and angrily demanded that RCMP liaison officers get out of her school. School liaison programs and school resource officers (SROs) may seem benign in design and intention: to deliver crime prevention education, eliminate the distance between youth and police, and promote police work. However, in an interview with CBC, Ms Haila offered a different perspective, pointing to the overpolicing of Indigenous and Black people and how, as a Black student, she feels intimidated by armed officers in her “learning environment.” In a context of systemic anti-Black and Indigenous racism, the police liaison officer who is charged with imparting lessons on crime prevention and “early intervention strategies” in schools is, to students of colour, just a “dude in a bulletproof vest” there to intimidate them and facilitate their passage through the school-to-prison pipeline.

Police got into our schools when we weren’t looking. Or rather, part of white privilege is believing in (and experiencing) youth programs developed by police organizations as educational and supportive, not punitive. My recent book, Youth Squad: Policing Children in the Twentieth Century (McGill – Queen’s University Press, 2019), looks at the “youth turn” in policing, a series of policies and practices aimed at embedding police in the fabric of childhood. These became a familiar part of growing up in mid-twentieth century North American cities – juvenile curfews, police athletic leagues, and police-run school safety campaigns. Justifications for this youth orientated police work often nodded toward the local police forces joining other state and non-state actors in a kind of public parenting and a commitment to crime prevention. The premise of the latter was that criminals were made, not born, so the police needed access to childhood. Get them while they’re young.

Youth conscious policing was as ambitious as it was insidious. Aimed at pre-teens these programs required a particular set of gendered attributes most associated with an avuncular officer or policewoman. This new performance of policing helped to create a new youth subject, the “pre-delinquent.” Pre-delinquency was a state that would be mapped onto chronological age in conjunction with other identity markers like race, ethnicity, gender, ability, and neighbourhood. For those who complied with, and bought into, curfews, joined police-sponsored teams, followed officers’ advice about safety, or mimicked officers as school patrols, the reward was a form of civic belonging or incipient citizenship. Significantly, the very process of categorizing young people into pre-delinquents, delinquents, and non-delinquents was always structured to fit contemporary racialized understandings of who was likely to offend and who was redeemable. Make no mistake, this was anti-delinquency work. However “kid-friendly” the policy and rhetoric surrounding juvenile liaison officers and SROs, the programs were always about getting tough on crime and identifying the rising generation of delinquents. The bottom line is that policing – even directed at youth – is about crime deterrence and law enforcement, which contradicts the social care work that youth-oriented policing is meant to perform.

Placing police officers in schools became a popular feature of community policing from the 1960s. By the 1990s US schools, unlike most of their Canadian counterparts, turned SROs into armed guards, emphasizing enforcement in the name of child protection. During the last two decades, however, armed officers have similarly been deployed in Toronto schools. Journalist and anti-Black racism activist, Desmond Cole, points out that the school resource officer program was, and remains, unevenly distributed through the city, concentrated in areas with significant Black populations, and its officers enforced a system that uses racial profiling and intimidation of minorities, and that “[r]acialized students are already facing disproportionate discipline in Toronto schools.” Black and Indigenous students are more likely than their classmates to be suspended and expelled. In practice, as Haleluya Haila reminds us, armed officers in schools reinforces discrimination against racialized youth.

Defund the police and get them out of the schools. Young people need help and guidance, not intimidation and discrimination.

Tamara Gene Myers, Department of History, University of British Columbia is the author of the recent book, Youth Squad: Policing Children in the Twentieth Century (2019), and Caught: Montreal’s Modern Girls and the Law, 1869-1945 (2006); she writes and teaches on the history of children and youth.

One thought on “Defund the police”