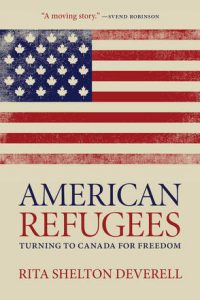 On January 1, 2015, Rita Shelton Deverell landed at Miami International Airport from Santiago, Chile for what was scheduled to be a brief layover on her way back home to Toronto. When US border agents scanned her passport, they noticed that it listed her birthplace as Houston, Texas. A Canadian citizen who had lived in Canada for the past half century and a Member of the Order of Canada since 2005, Deverell was quite surprised when border agents detained her to tell her that she was still a U.S. person and that “the United States still loves you.” That incident proved a strong motivation to expediate a book project that had been in the works for the previous two years.

That project is American Refugees: Turning to Canada for Freedom. In the book, Deverell explores the history of Americans moving to Canada at various points over the past two centuries. From the underground railroad to Vietnam War resistors to Americans crashing the Canadian immigration website following the 2016 election, the idea of Canada a safe haven for some Americans has loomed large in the Canadian imagination. In the book, Deverell uses powerful personal stories to contextualize the mythology that has been built around American immigration to Canada. By telling these stories, the book is an important contribution to an oft-discussed yet understudied element of Canadian history and the country’s relationship with its southern neighbour.

In this episode of the History Slam, I talk with Rita Shelton Deverell about the book. We discuss her personal story and its influence on the book, American immigration to Canada in the popular imagination, and what has traditionally drawn American immigrants to Canada. We also chat about racism in Canada and the United States, colonialism’s influence on perceptions of diversity, and the current state of Canadian-American relations.