The Graphic History Collective recently released RRR #30 by erica hiroko isomura and Kaitlyn Fung that highlights intergenerational resistance and community organizing in Vancouver’s Chinatown. In particular, the poster emphasizes the role of women in preventing the building of a freeway through the community in the 1960s as well as ongoing efforts to resist displacement and gentrification.

Another World Is Possible: Intergenerational Resistance in Vancouver’s Chinatown

The words of activist Bessie Lee, included on the front of this poster, reflect a robust legacy of community organizing by matriarchal elders, organizers, and activists in Vancouver’s Chinatown—one that continues today. This vibrant neighbourhood has long been a welcoming home to communities of immigrants, working-class, and low-income people. Yet displacement continually complicates its existence. Chinatown is situated on unceded Indigenous lands, including Musqueam, Squamish, and Tsleil-Waututh territories, and the neighbourhood has encountered many waves of displacement and gentrification. But intergenerational communities of resistance have always grown, and intermingled with each other, to challenge these threats.

In 1968, Bessie Lee co-founded the Strathcona Property Owner’s and Tenants Association (SPOTA) to stop “urban renewal” plans from the City of Vancouver, including the construction of a freeway that would demolish the neighbourhood. The women and mothers of the community led these efforts, knocking on doors to connect with neighbours, supplying food at meetings, and more. Ordinary families and residents, like SPOTA members Mary Lee Chan and her daughter Shirley Chan, became passionate advocates at local protests and city hall meetings. Their organizing drew attention from all levels of government, including the federal housing minister at the time. Through these efforts, they stopped the freeway from being built and spared neighbourhood residents from further displacement.

Unfortunately, in 2017 the community faced renewed threats of displacement due to the proposed development of a luxury condominium building on 105 Keefer Street beside Chinatown Memorial Plaza, a prominent neighbourhood gathering space. Anticipating that this project would worsen unaffordable housing and loss of cultural heritage, organizers mobilized again. Chinese seniors and youth huddled together for hours at city meetings, providing essential language interpretation services in Cantonese, Mandarin, and other dialects when the city did not. Elders such as Kong Tai and Ma Tai gave earnest and compelling speeches, sharing multilingual protest signs and snacks with youth. After four days of comments at public hearings, which overwhelmingly opposed the project, on 13 June 2017, city council voted against rezoning the area for development. On November 6, after the city’s development permit board listened to nearly a hundred speakers for over eight hours, people throughout the Chinatown community celebrated when the official building proposal was rejected.

Connected across time, place, and cultures, these community organizing efforts reflect the dynamic and intergenerational spirit of the neighbourhood. Even as ongoing gentrification in the area makes affordable homes and livelihoods increasingly difficult to sustain, its people remain determined to confront displacement. They are part of what makes Chinatown a lively community of resistance and care, led by the combined wisdom and joy of elders, matriarchs, and youth together. 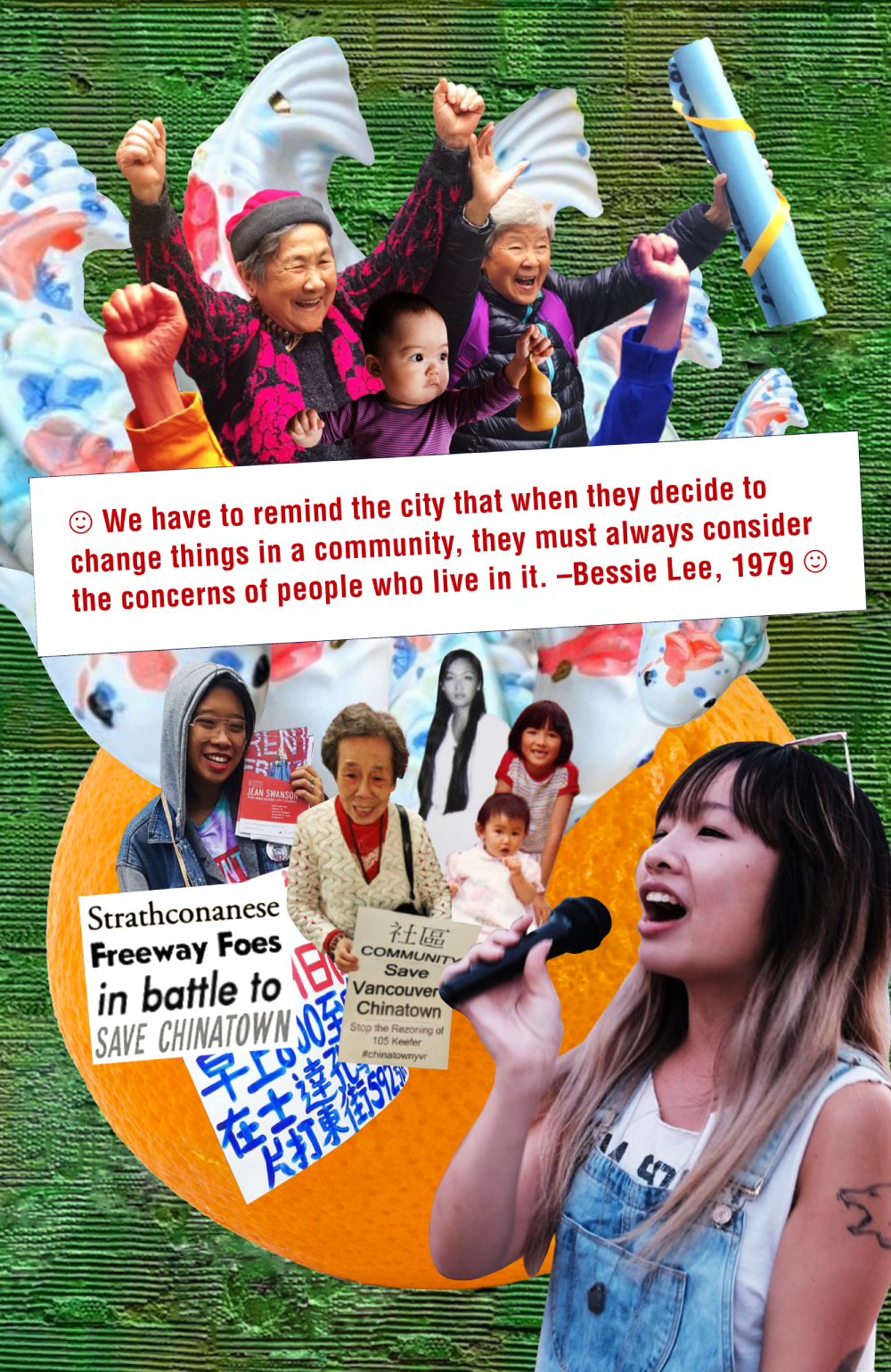 [Image Description:“The poster shows a digital collage, using recent and historical photos of matriarchal Chinatown elders, organizers, activists, and community members. Some of the people have their fists in their air, smiling, others are holding signs that say, “Save Vancouver Chinatown.” A white banner says, “We have to remind the city that when they decide to change things in a community, they must always consider the concerns of people who live in it. –Bessie Lee, 1979″”]

erica hiroko isomura is a writer, multi-disciplinary artist, and community organizer living on unceded Musqueam, Squamish, and Tsleil-Waututh territories (Vancouver/New Westminster, BC). erica is part of the Louie and Lang clans. Their family once ran the Marco Polo supper club (1964–1982) and Le Kiu store on East Pender Street in Chinatown, Vancouver. ericahiroko.ca

Kaitlyn Fung is a second-generation daughter of the Cantonese diaspora now living on the unceded territories of the Musqueam, Squamish, and Tsleil-Waututh nations. She pursues storytelling, often through writing or multimedia means, as a path towards greater hope, community, and justice in the world.