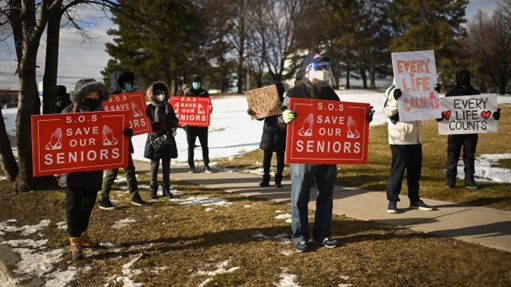 “People protest outside the Tendercare Living Centre long-term-care facility during the COVID-19 pandemic in Scarborough, Ont., on Tuesday, December 29, 2020. This LTC home was hit hard by the coronavirus during the second wave.” Nathan Denette, CP.

This post by Justin Panos is part of the “(In)Security in the Time of COVID-19” series. Read the rest of the series here.

From their office on Bay Street, the 2021 LTC Commission has released the latest report that condemns corporate nursing home operations and elected officials for their inaction and lack of leadership during the COVID-19 pandemic. At its height, there were 218 active outbreaks spread across the 600+ homes in Ontario. By March 14, 2021, 14,984 residents and 6,740 staff were infected. Approximately 11 staff and 4000 residents lost their lives and despite being 0.5% of Ontario’s population, long-term care residents tallied half of Ontario’s COVID-19 deaths.

This short essay attempts to elucidate and historicize Ontario’s nursing homes in the age of COVID-19 by bringing organized labour back in. Scholars since the 1980s have attempted to explain the corporate domination of nursing home policy in terms of either imperfect markets, institutional factors, ‘regulatory capture’ or the structural power of capitalist social relations. Activist journalists and academic scholarship however often ignore the place of organized labour in the evolution of the sector and the unfolding of the current crisis. Excessive focus on the top-down power analysis is rooted in an advocacy model—of activists speaking for workers and residents—rather than an organizing model, in which activists coach workers to liberate themselves and their resident through tough organizing conversations and worker by worker integration into the strategy to beat the corporations. Scholars and activist who want to challenge and end the for-profit model in nursing homes need to focus instead on the bottom-up power analysis of workers and their unions. Despite the potential power in the hands of LTC workers as a class, there has only been one major study of the structure of Ontario unions in the sector. That study focused on CLAC, a union most would scoff at, but it did present the structure of the working class in the industry in a way that no one else has. For all the Marxian and critical analyses, most scholars have avoided discussing the relative power of workers and their unions in the industry, or discussing plans to integrate the rank and file into the fight in a meaningful way.

Organized Labour and Reform in LTC

Back in the 1960s, the Building Services Employees International Union began organizing Ontario nursing homes and hospitals. The union advocated for compulsory arbitration in order to secure organizing wins in the face of top-level employer hostility. During this same time, federal and provincial studies on poverty identified older people who are chronically sick, economically impoverished, unable to care for daily needs. Over time, nursing home operators organized themselves into a coherent industry lobby—The Association of Nursing Home Incorporated in Ontario—in response to potential government investment in long-term care. Over several subsequent decades, a cartel of corporate long-term care chains used their financial resources to garner political power at the provincial and federal level. Ontario ultimately funded private, for-profit long-term care in two stages starting in 1965 and then again in 1972 with the Nursing Homes Act. These subsidies supported the conversion of hotels and commercial residential property into nursing homes. Eventually, the private long-term care model became entrenched and slowly eclipsed alternative, public approaches to long-term care.  Around this time, nurses were marching on Queen’s Park to demand collective bargaining and compulsory arbitration to address the deficient working conditions in the health care industry. The result of BSIEU and RNAO campaigning was the Hospital Labour Disputes Arbitration Act, which has placed unions in a vice grip, in terms of limiting their ability to fight the corporate care chains on the economic front. When the 1974 Supreme Court of Canada decision allowed for collective bargaining in the health-care sector, the RNAO collective bargaining department split to form the Ontario Nurses Association. Unionization spread across the sector immediately.

In 1981, CUPE engaged in the biggest challenge to HLDAA through a set of illegal strikes, which led to the formation of Ontario Coalition of Hospital Unions as well as open calls for the abolition of corporate care chains. For-profit care has, on rare occasions, encountered significant public opposition when evidence of preventable deaths in these homes has come to light. For example, the 1980 fire at an Extendicare in Mississauga that caused 21 deaths provoked major regulatory changes but only the biggest chains could afford the structural upgrades. So, ironically, this tragedy augmented the power of the cartel. The NDP, and its emergent leader Bob Rae, began to call for the abolition of long-term care and even thought the NDP won a majority parliament, the period of LTC reform from 1989-1994 only led to the growth in corporate power. This was followed by a super-charged corporate attack during the Harris period in which the corporate cartel won major capital subsidies per bed under the 1998 design standards.

The next major change in the structure of nursing home unions was the SEIU-CAW successorship. Starting in March 2000, thousands of workers displaced SEIU for the CAW (now Unifor). OLRB records show hundreds of displacement applications over a year period in the health-care industry. This has grown and altered Unifor’s overall structure as a national union and diversified its industrial organizing profile. The SEIU reorganized as a super local and still represents the largest number of workers in the industry.

Like the 1981 fire at Extendicare, the 2005 Casa Verde Inquest and the subsequent  Sharkey Report created the window for the current regulatory framework for the nursing home sector: The Long-Term Care Homes Act. Immediately following passage of this act, however, the industry was rocked by a  scandal involving evidence that residents in some homes were being tied down with physical constraints only to eventually strangle themselves to death in a desperate attempt to escape. Subsequently, it was revealed that some nursing home administrators were unethically administering drugs and anti-psychotics to residents in order to compensate for severe understaffing. Things took an even darker turn with the Wettlaufer homicides, a case involving the murder of residents by a nurse at a for-profit LTC home. 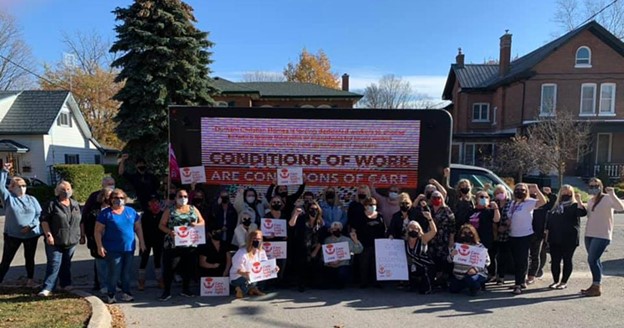 “Laid off workers rally for their jobs outside Durham long-term care home.” CUPE.

When the WHO declared a global pandemic on March 11, 2020 Ontario’s long-term care sector (LTC) was woefully unprepared. The LTC’s stockpile of PPE quickly disappeared like mist on a sunny day and the sector was conspicuously absent from the province’s emergency response plan. The Government of Ontario had not replenished its PPE since 2017 and, in fact, destroyed expired N95 masks because of faulty elastic bands So, Covid-19 spread undetected through the front doors of hundreds of nursing homes and by the end of April 2020, 55% of all LTC homes had outbreaks and 75% of all COVID-related deaths were in LTC.  Approximately 3,000 residents have died, along with 10 staff members, from the COVID-19 virus and countless others have died alone due to malnourishment, neglect and starvation. After a steep climb in the number of infections and deaths in the homes, the government was forced to reassess a long-term care sector defined by multi-job precarious employment for many workers, superfluous regulatory paperwork, and a huge reserve of volunteers, many of whom have relatives in the homes, who provide supplemental labor at no cost to operators reaping a fortune. On April 17, 2020, the province issued two emergency orders barring care providers from working at multiple homes.

In and around April 2020, class action lawsuits, court injunctions, requests for criminal investigation and several statements of claim were launched. The Canadian Armed Forces took over trustee five homes in Ontario and others across the country, including one in Quebec that was so abominably run that a soldiers who bore witness to the suffering received PTSD treatment. Rather than address the extreme deficit of care on display, Conservatives passed Bill 218, which gave virtual immunity to care home licensees from civil suits except in the most extreme circumstances. The second wave of the virus has been equally remorseless. Seven of 10 outbreaks were repeat outbreaks. Mass vaccination for health care workers and residents prevented the dire third wave from causing more lethal harm to the LTC sector.

Today, there is yet another LTC commission struck to investigate the awful state of Ontario nursing homes during the pandemic. But the LTC industry is specifically designed in such a way that private operators easily absorb outside pressure to reform while avoiding any policy changes that threaten to interfere with the long-term profitability of the nursing home industry. There is a long record of gross misconduct and criminal behaviour among LTC operators.

Bringing Organized Labour Back In?

The critical focus on the labour movement in LTC reform in not intended to question the representational capabilities of nursing home unions to their members. Nor to blame workers and their unions for the covid-19 crisis. Rather, its an attempt to recognize the only force capable of ending for-profit care in nursing home: the organized rank and file. The purpose of brining organized labour back in is to critical analyze what is preventing reformers from realizing the end of capitalism in nursing homes. There are three problems that need to be addressed. First, excessive focus on the top-down power analysis and no recognition of unionized workers. This has lead to an advocacy approach of activists speaking on behalf of workers, rather than to workers, in the parking lots or at their door steps. Let’s focus on the workers, their connections, and integrate them worker by worker into the fight. Second, the uneven growth of unionization among three to five major unions has fragmented the labour movement. Progress has undoubtedly been made here but it is confined to top levels of the unions and should be expanded to include each and every worker within their respective membership through a series of campaign designed to generate majority participation. Third, the constraints of compulsory arbitration has weakened internal union capacity to invest in, and take on the kind of fight needed to challenge the power of the corporate cartel. We won’t arbitrate our way to a public model and we won’t get it by tweeting disdain at Dr. Merilee Fullerton. Shifting this power equation requires going beyond the advocacy model toward the organizing model. The changes to the structure of unions in the sector did result in better regulations and drawing attention to recurring problems but it has not led to the kind of increased power capable of bringing in the life-saving staffing ratios residents need, increased capacity into the sector, or pushing aisde for-profit care. It is an organized rank and file and their unions who will topple the corporate care cartel, if they abandon the advocacy and shallow mobilization model and put in the kind of worker-by-worker organizing need to run the really high-risk actions, like once again striking, in order to bring the fight to the economic front.

For examples of such coalitions, we need only look to the history of the example of Local 1199NEs. The striking nursing home local had enough community support and power it once successfully ran an independent candidate for governor of Connecticut to impose the first state income tax to fund increased staffing. Nursing home strikes were widely supported, not shunned, and the results were a kind of working-class power unseen in this province. It remains an open question whether this kind of social movement can be built in Ontario.

Justin Panos did graduate research on the politics of Ontario nursing homes as part of Dr. Pat Armstrong’s seven-year Re-Imagining Long-Term Care global study. He also worked as health care union researcher in Toronto and Philadelphia. He is currently a union organizer.