This autumn marks a significant milestone in the history of filmmaking about Indigenous – settler relations in Canada. As Long As The Rivers Flow, the documentary series about Indigenous resilience that launched Tamarack Productions, was released in September 1991.

As Long As The Rivers Flow was among the first national collaborations of Indigenous and non-Indigenous documentarians in Canadian television history. It is a series of five one-hour documentary films. The films recount an epic story. The struggle of Indigenous peoples to assert control of their destiny in the place that came to be called Canada. 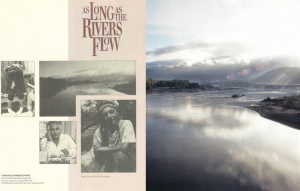 In September 1991 two documentaries in the series, one by the late Métis director Gil Cardinal and the other – her first film – by Métis filmmaker Loretta Sarah Todd, director of 2020’s wonderful Monkey Beach drama, premiered at TIFF (then The Festival of Festivals.)

Following the world premieres of Tikinagan and The Learning Path, As Long as the Rivers Flow debuted on a consortium of provincial educational broadcasters led by TVO. The films were introduced by Cree and Métis actor and activist Tantoo Cardinal for the English broadcast premiere. The series was first broadcast en français in Canada and abroad that same year on TV5 as Tant que coulent les rivières. Eventually the series was versioned in Cree for broadcast and educational use in northern Ontario and Québec.

To celebrate the 30th anniversary of the series, and in the spirit of intercultural cooperation, respect and truth that the series represents, Tamarack Productions is proud to offer the films free of charge for the remainder of 2021 on its website in the interest of fostering reconciliation and collaboration among storytellers.

You can watch the films here.

The films from the series have screened on five continents and won over twenty international awards. The series garnered the Producers Award at the 1992 American Indian Film Festival in San Francisco, California and an award at a festival in Lima, Peru. Films from the series also won the Public Jury Award at the Nyon Switzerland documentary festival and an award at the Chicago Film Festival. In 1994, Starting Fire With Gunpowder, the film in the series concerning the Inuit Broadcasting Corporation, was selected for a an Indigenous film series at the prestigious Sundance Film Festival.

I conceived the series in 1989 and created Tamarack Productions to produce it. I was an executive producer at CBC Radio at the time. Perplexingly CBC was not interested in the series. Others particularly at the National Film Board of Canada and TVO were. I eventually took a leave-of-absence from CBC to make the series.

Independent filmmaker Peter Raymont was impressed by the concept and joined the project as executive producer. We assembled an unprecedented filmmaking team to direct the series. Raymont was also co-producer of the five films.

As a graduate of Indigenous Studies at Trent University, a person who had learned a great deal from Indigenous people as a canoe trip leader in N’daki Menan, homeland of the Teme Agama Anishinaabe and as a child care worker in troubled Kenora, Ontario I had a lot of questions that informed the series. As a journalist and radio documentarian covering the 1980s constitutional talks concerning aboriginal rights in the Canadian constitution as well as telling stories concerning Indigenous communities from Yukon to Québec for a decade, I yearned to explore the issues and build a diverse team to achieve the series. It was an extraordinarily rewarding experience. I was honoured, and frankly a little stunned, that some of my documentary filmmaking heroes like Mr. Cardinal, Hugh Brody, Alanis Obomsawin and the late Boyce Richardson expressed immediate and keen interest in joining the effort.

The gesture of re-releasing the series has more than commemorative meaning. The films engaged with culture, history, social issues and politics across this place called Canada in Indigenous territories from British Columbia, the prairies, parts of the North West Territories now Nunavut, the bush country of north western Ontario and along the once surging rivers on the east coast of James Bay in Québec. The films touch on issues that still resonate or remain sadly unresolved at this present time of aspirational reconciliation, thirty years after their making.

The Nisga’a First Nation of north western British Columbia long led the fight for aboriginal rights in Canada. In Time Immemorial, Hugh Brody chronicled the Nisga’a struggle as they took their case for land rights all the way to the Supreme Court of Canada. The film features footage of stalwart Nisga’a leaders like Frank Calder and James Gosnell, people who literally changed Canadian history and constitutional law by force of their argument and conviction.

Indigenous control of education is explored in The Learning Path. Loretta Sarah Todd introduces three elders, linguist Ann Anderson, counsellor Eva Cardinal, and historian/journalist Olive Patricia Dickason, remarkable educators who worked in their own ways with younger Indigenous people and the Canadian public at large on Indigenous revitalization and historical and cultural recognition. These remarkable women who have all died since the film was released recount harrowing experiences at residential schools and elsewhere, memories that fueled their determination to preserve their language and identities.

The Learning Path was originally conceived by the great Abenaki filmmaker Alanis Obomsawin who had to leave the project when conflict broke out at Kanehsatake (Oka), Quebec where she made her landmark series of films from behind Mohawk lines. As the situation at Kanehsatake continued, Ms. Obomsawin introduced Mr. Raymont and I to, the then emerging, filmmaker Loretta Sarah Todd. It was a great recommendation. Ms. Todd worked closely with producer Cari Green from their base in Vancouver. The Learning Path is an incredibly relevant film to this day given Canadians’ overdue awakening to the residential school experience.

Gil Cardinal’s Tikinagan is a provocative account of the native child welfare system. Tikinagan, the Cree word for the cradleboards on which Indigenous parents carry their babies, is the name of a revolutionary native run child care agency operating out of Sioux Lookout in north western Ontario.

The film was the beginning of a filmmaking partnership between Gil Cardinal and I that lasted for the next decade. He became a dear friend. I mourn his death and hope that his superb work continues to reach an audience.

Control of the media as a means of Indigenous self-determination is the topic explored in Starting Fire with Gunpowder. The film chronicles the origins and achievements of the Inuit Broadcasting Corporation (IBC), a model for Indigenous broadcasters the world over. David Poisey collaborated with Montréal filmmaker William Hansen on the project. The film is a window on fascinating developments in Inuit storytelling from which circumpolar and global audiences continue to enjoy and learn.

In Flooding Job’s Garden, Boyce Richardson revisited communities he first filmed in the 1970s, before Hydro Quebec began its work, documenting 20 years of massive change in Cree country. As Bourassa and Hydro Québec prepare for Phase 2, the Crees mounted an international campaign to protect the environment and ensure responsible development.

It was a great honour to work with Mr. Richardson whose earlier films on the James Bay Cree had inspired me to work in journalism and documentary film way back as an undergraduate student in Indigenous Studies at Trent University. His clarity, discipline, focus and healthy skepticism of mainstream media are lessons to me to this day. Boyce Richardson made a great contribution to our understanding of critical environmental and Indigenous issues. He died in Montréal in 2020 at age 91.

Thirty years after its release I am proud to have been involved in As Long As The Rivers Flow. The films remain extremely relevant. The high quality of work by superb documentarians can still command and inform audiences. The nature of our collaboration as filmmakers as well as the courage, generosity and wisdom of the communities and individuals represented in the series inspire me to this day.

James Cullingham is president of Tamarack Productions, an adjunct graduate faculty member in Indigenous and Canadian Studies at Trent University and professor at Seneca College. His latest film The Cost of Freedom –  Refugee Journalists in Canada  is being released this fall. His book Two Dead White Men – Duncan Campbell Scott, Jacques Soustelle and the Failure of Indigenous Policy will soon be published by SenecaPress. Cullingham hosts “Sittin’ On Top Of The World” – Wednesdays 15h on Trent Radio.