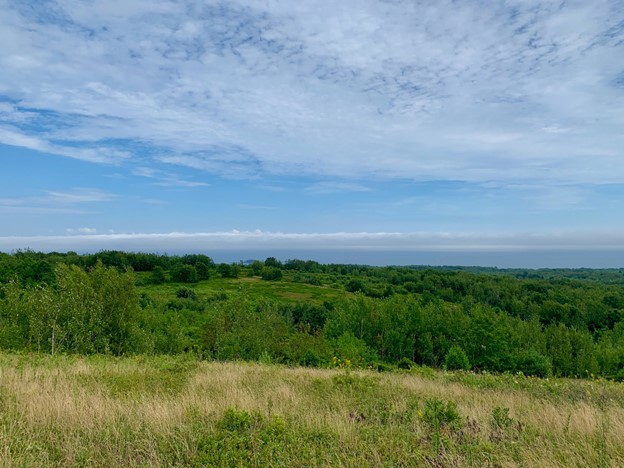 This is the eighth post in the series Historians Confront the Climate Emergency, hosted by ActiveHistory.ca, NiCHE (Network in Canadian History & Environment), Historical Climatology, and Climate History Network.

This summer, the raspberry crop at Daisy Chain Farm was much smaller than usual. The variable winter weather meant that abnormal freeze-thaw cycles caused the raspberry canes to lose their resistance to cold in periods of thaw, making them more susceptible to damage when the weather turned icy again. In comparison to last year’s bumper crop, whose flavor and color filled my family’s freezer and lifted our spirits through a pandemic winter, this year’s raspberries were nowhere near as abundant.

Thanks to the observations of farmers and other food-producing folks, and to the work of climate scientists, we know that such variable weather and its impacts on agriculture and food production are consequences of human-created, or anthropogenic, climate change. For decades, despite insidious efforts to suppress the overwhelming scientific consensus on human-caused greenhouse gas emissions and their impacts on the earth’s systems, it has been clear that changing ecological realities due to climate change have the potential to severely disrupt the systems that provide humanity with sustenance, from industrial-scale grain cultivation to small family farms to fisheries to my local raspberry crop.

Like many other aspects of the climate emergency in which we find ourselves, such disruption is a daunting prospect. When I grew up in midcoast Maine, in a rural community in a rural state, the rhythms of the seasons and changes in land- and seascapes were reflected, first and foremost, on the table. To witness agricultural disruptions and to hear about future agricultural threats in a rural state is to acknowledge a shifting cultural and economic landscape that goes far beyond a field, orchard, or lobster boat.

My own experiences with environmental and agricultural policy have underscored the importance of a resilient food system and agroecology to ensure a sustainable and equitable future which has the potential to be severely disrupted by the impacts of climate change. Maintaining the integrity of soils, woods, and waters, supporting a new generation of young farmers, and working towards a low-carbon future should continue to take top priority for policymakers at regional, state, and local levels.

Such policies and community projects, some of which I have had the privilege to be involved with, deal mostly with the present and the future. Yet for decades, climate historians have also looked to the past to more fully understand the relationship between human history and the Earth’s climate systems. Agriculture has been at the center of many of these studies, as many pre-industrial societies relied on largely on arable crop outputs whose success was contingent on specific meteorological and ecological conditions. All methods of food production, from farming to hunting, fishing, and foraging, were intimately linked to seasonal, annual, and decadal variations in weather and climate. For agrarian societies who relied on arable staple crops such as wheat or rice, the success or failure of a harvest had multifold ramifications for individuals, communities, and economic systems.

Many climate historians have therefore focused on the fluctuations of these staple crop yields, considering them in the context of climate variability documented in “proxy” sources such as tree rings, ice cores, or lake and ocean sediments which preserve a record of past changes in Earth’s systems that “signal” variations in the climate. Staple crop yields, such as wheat, can provide a similar signal that demonstrates an abundance or shortage of grain, which in turn can be connected to a failed harvest. A great deal of scholarship has examined the relationship between well-documented grain prices and meteorological shocks which may provoke harvest failures and even – some argue – trigger devastating episodes of, for example, famine or civil unrest. This is especially common for the period known as the “Little Ice Age,” where the global climate system experienced widespread disruption due to the interaction of volcanic eruptions, decreased solar activity, and atmospheric circulation shifts. These climatic disruptions manifested in different ways and at different times between 1300 and 1800 CE, and were especially notable in the Northern Hemisphere, where cooler-than-average temperatures and unpredictable, often extreme storms and weather patterns characterized much of the period.

As influential and valuable as some of these perspectives are, I find it difficult to make connections between the rise and fall of pre-industrial grain prices during past episodes of climatic extremes, and the realities I’ve witnessed in agricultural communities today. Such analyses offer, at best, a bird’s-eye view of complex processes of ecological change, agricultural work, and large-scale economic shifts. Often, though, this kind of simplification obscures many of the nuances of the relationships between climate and agriculture, including local processes of adaptation in the past which can offer perspectives on the impacts of climate change on our present and future. It also focuses historical perspectives on periods of extreme climate change, crisis, and disaster, when research has shown that unpredictable, variable weather patterns, rather than isolated events, often presented the greatest ongoing challenge to farmers.

Today, as in the past, farmers, food producers, and communities that depend on agricultural and rural work are coping with the consequences of a warming climate and disrupted earth systems that impact countless local agroecological factors. Efforts to mitigate immediate risk, build a climate-resilient agricultural system, and remain financially viable all require time, expertise, and resources. The realities of food and economic systems today mean that it is enormously challenging to meet all these goals, let alone in the same way and at the same time. As has become abundantly clear over this past summer of extremes – in case it wasn’t evident enough before – the impacts and consequences of the climate emergency are multifold and sometimes difficult to distill into price series or other quantitative data. An over-emphasis on markets, rather than human beings and ecosystems, is an abstraction of the complicated role of climate change which can often be illuminated more effectively through storytelling projects and firsthand experiences.

As a climate historian living in the climate emergency with deep concern for its impacts on the rural places and people most dear to me, my research on the impacts of climate change on agriculture is personal as well as academic. The questions I ask of my sources in the past are the same ones that I and many others ask in the present and future: What changes can we make? How can we restore what has been lost? What does adapting for next year look like? How about the following year, or ten or twenty years after that? These answers have layers of urgency: my own scholarly curiosity, my concern for my own communities and the many others like them, and my hope for policy agendas that foster the adaptations needed to ensure the safety and resilience of agricultural land and those who live and work with it.

My recent research into the long-term consequences of extreme weather on English agriculture has been conducted in two modes. In the first, I look for stories, not of loss, but of gain:  the experience of farmers that encouraged them to diversify the crops they sowed, change the recipes of the bread they baked, and recognize the impacts of frigid temperatures on soil fertility to change their sowing and harvest schedules accordingly. In the second mode, with an eye on today’s unseasonable weather and an ear to the often-bleak news cycle, I look for hope; a reminder that agricultural communities have often persisted, in the past, with flexibility, commitment, some loss, and some luck, in the face of adverse climatic conditions.

I am under no illusions that agricultural techniques from pre-industrial England are a panacea for the challenges facing my own community – nor does my research into adaptation strategies offer an exact roadmap for agricultural policy in New England. The stakes are very, very high – we stand to potentially lose much more than a year’s raspberry crop. But the research that I and others are conducting now, oh-so-urgently, also offers examples of local adaptation supported by widespread participation on multiple scales to create resilient communities and food systems.

There are more variable frost and thaw cycles to come; challenges to climate resilience seem to be around every corner. But next year’s harvest is not yet determined – new irrigation strategies, hardier crop varieties, and carbon-sequestering till methods are just some of the strategies Daisy Chain Farm and others like it has been introducing to mitigate the effects of a changing climate. When the problem of climate change seems too large, I think of stories like this one, where two years’ worth of raspberry crops illuminate the challenges we face in the climate crisis as well as the resilience of humans and agricultural ecosystems in the face of change. In my own research, I look for more stories that highlight the expertise, adaptation, and hard work of rural communities during periods of climate change in the past. I know these stories exist because I grew up in such a community myself, and history is rich with others like it. Bringing the intertwined histories of rural life and climate resilience forward offers not only potential adaptation strategies for agricultural communities today, but the hope needed to continue working for good harvests of all kinds in the years to come.

Emma Moesswilde is a doctoral student in environmental and climate history at Georgetown University. Born and raised in midcoast Maine, she studies the relationships between climate change, agricultural practice, and rural life in Britain and the Northern Atlantic before 1800. Special thanks to Daisy Beal for sharing her perspective for this piece.

The All We Can Save Project