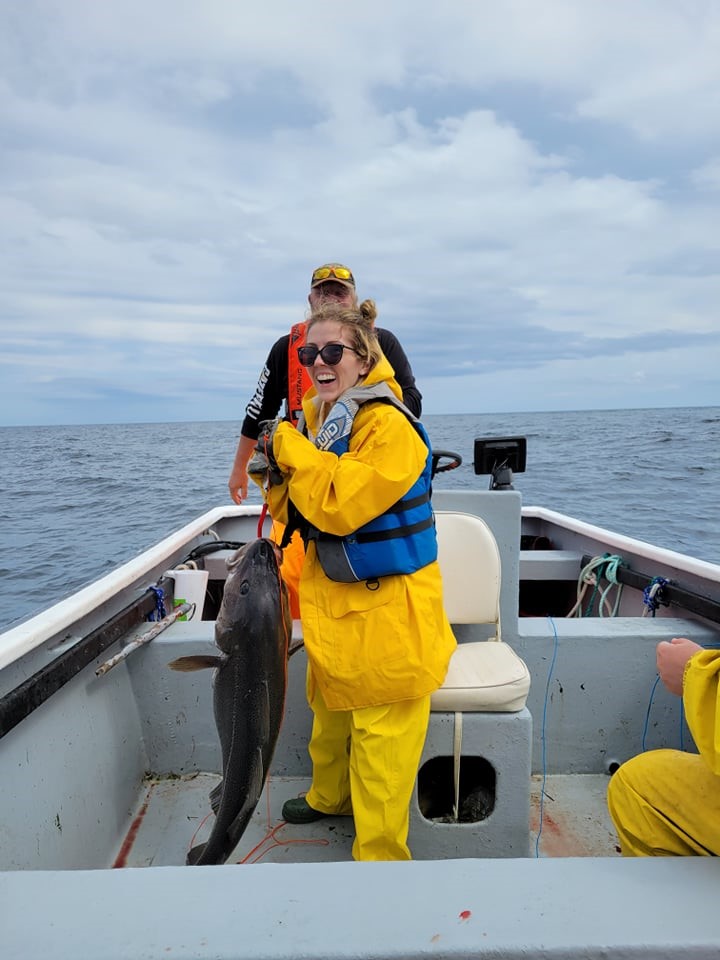 Newfoundland is known for cod. The fish is often one of the first things that come to mind when thinking of the island. For “Come from Aways”, a key part of becoming an “honorary Newfoundlander” (as part of a “Screech-In” ceremony) you must kiss a cod fish. I am from Newfoundland and when I think of home I think of cod – eating it, catching it, the history of it. Cod is predominant and iconic in Newfoundland culture and memory. Decades of overfishing decimated the historically plentiful ground fish population and it has yet to return to healthy levels, despite the moratorium on cod put in place by the federal government thirty years ago. Nevertheless, cod remains central to the history, culture, imagery, and even identity for Newfoundland and its peoples.

The cod fishery has a long history in Newfoundland, with the affluent cod stocks being the very reason the island was settled by Europeans in the 17th century.[i] While the fishery was abundant for hundreds of years, the industrialisation of the fishery in Newfoundland’s early post-confederation period, combined with foreign fisheries doing the same, quickly diminished cod stocks well below sustainable levels. These significant problems were well known to both the federal and provincial governments. At a First Ministers’ Conference on the Economy in February 1992, Newfoundland Premier Clyde Wells addressed the problems of foreign overfishing, warning that “the productivity of competitiveness of the Canadian fishing industry is undermined by […] foreigners who are devastating – in reality destroying – the resource […] If this happens, the backbone of the Newfoundland economy will be broken.”[ii] Ultimately, the Newfoundland government blamed Ottawa for the crisis in the fisheries, as it was the federal government’s jurisdictional responsibility to address the problem in the first place.[iii]

The cod moratorium was announced on July 2, 1992 by Newfoundland politician and federal fisheries minister John Crosbie. When addressing a crowd in the fishing community of Bay Bulls, Newfoundland, on Canada Day in 1992, those present knew that a decision regarding the fishery was looming. The tension caused one man to shout at Crosbie, questioning whether the politician was a Newfoundlander or if Ottawa was just “more important” now. While the cod collapse was a “man-made catastrophe” due to the industrialized overfishing of the Grand Banks by Canadian and foreign fishers alike, it did not take the sting out of the reality of the situation. The reaction to the announcement the following day was immense, with a visceral response from the fishers in the province. The now infamous phrase, “I didn’t take the fish from the goddamn water,” was Crosbie’s retort to the emotional and fearful reaction of the fishers who had now lost their generational livelihood.[iv]

The cod moratorium was – and remains – the “largest industrial mass layoff in Canadian history,” with well over 30,000 fishers and fish plant workers losing their jobs in an instant in a province with a population of approximately 573,000. The moratorium ripped open old wounds, with the long lasting negative sentiments toward the federal government and consequently confederation coming into play in the immediate aftermath of the announcement – and this is still felt today. While it was initially meant to be a short-lived measure to stabilize the fishery, the moratorium has stretched on and there are those in Newfoundland who are still blaming confederation, and the consequent federal management of the fisheries, for the decimation of the cod stocks off the coast of the island. As well, Newfoundland fishers and politicians alike are still demanding action from Ottawa against the foreign fishers who continue their “pillaging” of the migratory fish just outside of the 200-mile limit.[v]

The effects of the cod moratorium for Newfoundlanders have been long lasting, as it drastically changed the socio-economic conditions in the province, as well as its relationship with the federal government. Moreover, the moratorium is responsible for the demographic trends in the province today, with an aging and shrinking population. With the immediate unemployment for so many in the province, outmigration and rotational work became a solution for many individuals and families. Within a decade of the moratorium, more than 60,000 people left the province seeking better job opportunities. This significantly affected the mentality of those in the province and permitted a generation of young people to grow up feeling as though leaving their home province was inevitable and synonymous with adult life.

The final report from province’s Royal Commission on Renewing and Strengthening Our Place in Canada in 2002 highlights many instances of the difficulties and challenges that Newfoundlanders and Labradorians faced in the years since the closure of the cod fishery.[vi] It noted that in the years after the moratorium, the province had been “struggling through the severe impact” of compounding issues such as the “unbearable loss of its fishery resource and the unfolding demise of its rural fishing society,” with persistently high rates of unemployment and out-migration combined with the “lowest birth rate in the country.” There was expressed concern from those in the province of losing the sense of a distinct people, where Newfoundlanders and Labradorians were said to “have a unique sense of place and a distinct and deep love for their Province,” yet many vacate the province due to the habitually poor job market and economic conditions. During public discussions, outmigration was usually spoken of as an economic concern but the women’s groups presented a fuller picture of the issue, with considerable discussion of the emotional, mental, familial, and cultural aspects out outmigration.[vii] It is undeniable that the effects of the cod moratorium stretched well past the economic, into the cultural, the sense of self, the family, and significantly altered the population trends of the island.

The offshore oil and gas industry has been central to Newfoundland and Labrador’s economy for the past few decades, with the industry stabilizing the province’s economy after the cod moratorium. The shift to oil and gas in Newfoundland began decades before the cod collapse, in the early 1970s with offshore exploration.[viii] Now, with the shift toward green energy, there is concern for some in the province that “history is about to repeat itself” with offshore oil going the way of the cod in Newfoundland and Labrador. With the repercussions of the cod moratorium for the province, most notably being the demographic shift to a steadily aging population with the lowest birth rate in the country, this concern is understandable. However, the changes occurring in the oil and gas industry will not mirror the collapse of the cod fishery. First, the shift to green energy will occur more slowly, not abruptly as with cod. Second, oil and gas does not have as lengthy a history in the province, although it has been central in many of the same ways, such as being a chief employer.

Part of moving past the economic and socio-cultural trauma of the cod moratorium and the devastation it caused for many Newfoundlanders is finding ways forward. In recent years, the recreational ground fishery has become a highly anticipated part of many Newfoundlanders summers; most importantly, it actively connects Newfoundlanders to their history, heritage, and traditional foodways and practices, thereby recouping some of the loss experienced in the aftermath of the moratorium. As well, repurposing decommissioned fish processing plants that haunt many outport communities in rural Newfoundland is a considerable step forward by creating local jobs and removing the spectre of the abandoned facilities. In Burin, for example, a fish plant has been converted into a cannabis facility, which employs local workers some of whom worked in the former fish plant. Will the inevitable end of the offshore oil era in Newfoundland and Labrador lead to the same devastation and cultural loss as the cod moratorium? Given the gradual shift to green energy, including jobs to replace those lost from the fossil fuel industry – and especially where little else is as embedded in the psyche of Newfoundlanders as cod – I wouldn’t think so.

Shannon Conway received her PhD in History from the University of Ottawa in 2020 and is currently a Research Associate with the Gorsebrook Research Institute at Saint Mary’s University. Her present research is on perceptions of Newfoundland culture, identity, and nationalism in Newfoundland children’s literature from 1990-2015 and post-Cod moratorium Newfoundland culture and identity more generally. Find her on Twitter @DrShannonTC.

[vi] At this time, ten years after the cod moratorium, the province’s population was approximately 521,200. Royal Commission on Renewing and Strengthening Our Place in Canada, What We Heard, 8.