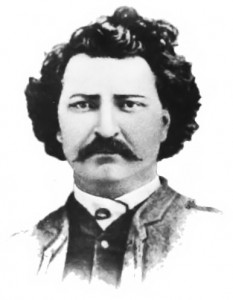 A controversy has erupted over the past week surrounding how Canadians should remember Louis Riel, a 19th century Métis who not only led the 1869 Red River and 1885 Northwest Rebellions, but also negotiated the terms for Manitoba’s entry into Confederation in 1870 before his execution in 1885 for high treason.

In a pamphlet posted online last December, Edmonton East Conservative MP Peter Goldring argued that Canadians should think of Riel as a “villain” and hold him responsible for the deaths that occurred during the Red River and Northwest uprisings.  Goldring’s statements responded to a recent private members bill, introduced by Winnipeg NDP MP Pat Martin, that seeks to overturn Riel’s treason conviction and officially recognize him as a Father of Confederation.

This week, the Prime Minister’s Office denounced Goldring’s sentiments concerning Riel. Opposition parties had already reputated Goldring.  And the hundreds of comments posted on the websites of Canadian media outlets demonstrate that Goldring’s questioning of a heroic historical memory of Riel has stirred Canadians (see here and here, for examples).

This most recent dispute over the historical memory of Riel is part of a long trajectory within Canada’s past concerning the ways in which the Métis leader’s life should be remembered by individuals, social groups, organizations, and the state.  Goldring’s pamphlet criticizes “those today who want to change the historical record regarding . . . Riel” for engaging in erroneous “historical revisionism”; however, interpretations of Riel and his importance to Canada has straddled the spectral ends of reputation – villain or hero – since the Métis leader’s own lifetime.  Indeed, during the treason trial that resulted in Riel’s hanging, Canadians were split on the purpose of his actions, his treatment by authorities, and what he represented of Canada’s future.  Whereas many Anglophone (and especially Protestant) Canadians saw Riel as an evil threat to the orderly settlement of the West, French-Canadian Catholics believed his mistreatment at the hands of the federal government was part of a larger problem of inequality towards French Canadians within the recently-established Dominion of Canada.  Even Wilfrid Laurier, future Prime Minister, stated in 1885 that “[h]ad I been born on the banks of the Saskatchewan I would myself have shouldered a musket against the neglect of government and the shameless greed of speculators.”

After Riel’s death, the meaning of his actions continued to divide Canadian society.   Doug Owram’s 1982 article “The Myth of Louis Riel”, published in the Canadian Historical Review, illustrates changing perceptions of Riel, noting that by the 1960s, he had become accepted as a hero by much of English Canada, falling more in line with long-standing French Canadian and Métis understandings.

Shannon Bower, in a 2002 article in Manitoba History analyzed the commemoration of Riel through the prism of two contentious statues of the man that have stood on the lawn of the Manitoba Legislative Building.  A 1971 statue, commissioned to celebrate Manitoba’s centenary, aimed to represent in aesthetic form the tensions within Riel’s life, but his twisted and naked figure faced “mixed reception” from Métis and non-Métis.  The statue, conceived by Marcien LeMay and Étienne Gaboury, was eventually moved from the legislative grounds to the nearby Collège Universitaire de St. Boniface in 1995.  A “less volatile” and certainly more heroic statue took its place in 1996.  Bower argues that “[w]hether hovering as historical phatasm or incarnated as stone statue, the Riel that people recognize is linked less to his actual historical role than to the needs and desires of the various groups and individuals who seek to animate their struggles through the transcendent spirit of Louis Riel.”

Sean Kheraj recently offered an excellent survey of various media representations of Riel, including those contained in North West Mounted Police, which Kheraj describes as a “bizarre and spectacularly racist” motion picture by controversial American filmaker Cecil B. DeMille.  The 1940 film makes for a particularly interesting comparison with a much more recent Historica Minute of Riel’s hanging, also featured on Kheraj’s site.  The CBC Digital Archives also features a number of television and radio clips from 1966 to 2004, entitled “Rethinking Riel”.

It is uncertain whether the PMO’s response to the Goldring pamphlet will ensure an official repeal of Riel’s treason verdict and his recognition as a Father of Confederation – Martin’s bill is not the first such attempt.  Andrew Smith points out that Goldring’s attack suggests a shift within the former Reform wing of the Conservative Party – or at least one of its members – away from an interpretation of Riel as the first of many Western protest leaders.  What is clear, however, is that the historical memory of Riel will continue to reflect wider societal debates about minority rights, the validity of violence against the state, and the future of Canada.

8 thoughts on “The Historical Memory of Louis Riel: A Long-Standing Canadian Debate”