As a product of an inter-racial relationship (what a clinical term!) myself, I was disturbed that colour was the manner in which Canada’s national news network chose to describe the latest census results. I remember far too easily the painful playground taunts of “banana, banana” because I was “yellow” on the outside and “white” on the outside. 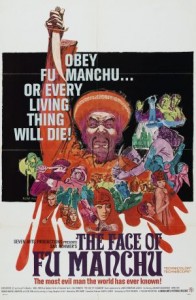 Poster for 1965 film The Face of Fu Manchu (from Wikipedia)

Colour, as a means of describing people, is shorthand for all kinds of discriminatory attitudes.  At the beginning of the twentieth century the term “yellow peril” was used to attribute a wide variety of dangers to migration from Asia including loose morals that would corrupt society and cheap labour that would take away jobs from hard-working Canadians and Americans. The subtext was that Anglo-Saxon societies everywhere were going to be harmed by yellow hordes. Such imagery quickly captured the imaginations of editorial writers, filmmakers and the North American public at large, who used it to conjure up images of Attila Hun and masses of threatening, raging, invading Mongols. Fu Manchu, a fictional character, created by Sax Rohmer, came to embody the archetypal Chinese threat, with his evil laugh and sinister moustache.

This imagery of difference had major repercussions as it reinforced beliefs about the impossibility of assimilating Chinese migrants into North American society and contributed to the imposition of head tax legislation and outright exclusion from Canada in 1923. The CBC’s casual references to colour as a way of earmarking ethnicity ignore the long legacy of racism and discrimination that such usage encapsulates and perpetuates. With a little lesson in the geneaology of colour-coded racism, the CBC might have chosen a more appropriate term to describe the many celebrations of love that have been taking place in Canada. It is people who are getting married after all, not colours.

Laura Madokoro is a PhD candidate in history at the University of British Columbia.  She studies twentieth century global migration with a special focus on political refugees in Asia and the Commonwealth in the post-1945 period.

5 thoughts on “How far have we come? From Yellow Peril to the “Colour of Canada””