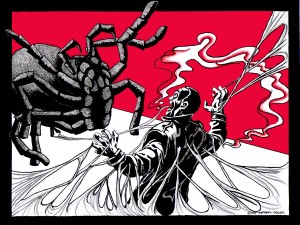 Attached is the talk I gave at McGill in March about the historic connection between the university and the asbestos industry. University ties to massive, ethically-questionable corporations is nothing new, and certainly not McGill-specific. Quebec’s continued support of the asbestos industry, of which it was once a world leader, is also nothing new. Neither is the public’s general outrage when information on these ties emerges, nor is the public’s gradual loss of interest in this topic, which contributes to the perpetuation of the toxic legacy of asbestos in Quebec, Canada, and the world.

This time around, the outrage and loss of interest began with a CBC documentary that aired earlier this winter and exposed McGill’s Dr. John Corbett McDonald’s relationship with the asbestos industry, and questioned his findings on how Canadian asbestos impacted human health. While it shouldn’t be a surprise that someone funded by the asbestos industry produced reports claiming that the carcinogenic mineral wasn’t so bad after all—as long as it came from Quebec’s mines, of course—what is absolutely frustrating is McGill’s reaction.

McDonald was exposed in the 1970s by CBC Radio and the New York Times shortly after his pro-Canadian asbestos reports were published in well-respected medical journals—the public was outraged then too, but again, forgot about it soon afterwards—and McGill received and processed the cheques coming from the Quebec Asbestos Mining Association (QAMA) to aid in his research endeavors. Despite this, McGill apparently had no idea McDonald’s legitimacy and authority were questionable. Closing ranks around one of their own is a tough habit to break.

Despite their immediate defense of McDonald, McGill launched an internal preliminary review into his ties to the industry, and investigator Dr. Rebecca Fuhrer, head of the Department of Epidemiology, Biostatics, and Occupational Health at McGill, attended my talk in March.

Now, the struggle for the legitimacy of historians amongst scientists is, again, nothing new, although it remains unfortunate, and I hoped that Dr. Fuhrer would be inspired by my talk to look deeper into the evidence. I was glad that during the question period, we got into a nice discussion on ethics, and what defending McDonald and his outdated conclusions, (which were outdated even in 1970 when he published them), says about McGill.

McDonald has won awards for his contributions to public health in Quebec. It seems he also had ties to an industry that was notorious for corruption and deceit. The information McDonald published on this greatly contrasted the conclusions respected members of the global medical community had been making on the dangers of asbestos for decades, and the reason they differed so much is not because Quebec asbestos is safe—although it is safe if you believe that jumping from the 16th floor of a building compared to the 18th floor will give you a different result.

On April 4th, Dean of Medicine Dr. David Eidelman, sent an email to the McGill community to inform us that Dr. Fuhrer’s preliminary report had been submitted and stated that there was no evidence of research misconduct, but that more time and research is needed to assess McDonald’s research “integrity.” What is the difference between misconduct and a lack of integrity? A dilution of accountability?

As predictable as the internal review’s non-conclusion conclusion is, it’s also frustrating. Sure, the general public has once again forgotten its outrage, so the heat is off McGill, but what about the long-term and far-reaching effects of researchers like McDonald, and what about McGill’s role as an internationally respected institution? In navigating McGill’s archives, did Dr. Fuhrer take the time to examine McDonald’s published conclusions within the context of what every medical professional not funded by the industry was saying about Canadian asbestos and health?

Quebec’s asbestos workers were usually kept far away from nosey medical professionals the companies didn’t have in their pockets for fear of what they would discover. There’s a reason they allowed McDonald to study them, and there’s a reason QAMA was head over heels happy over his conclusions. What was that reason? While examining these workers, McDonald made choices on who was important enough to study and who wasn’t—the female workers in the industry certainly weren’t, even though the first recorded person to die of asbestos-related disease was a woman, and reports on the specific vulnerability of women to diseases asbestos causes had been widely discussed in the global medical community for decades.

Did McDonald, a revered researcher and now professor emeritus at McGill, not keep up with the literature on the subject he was rapidly becoming the Canadian expert on? Who else did he overlook in his examination of Quebec asbestos workers? What could possibly make him believe Canadian asbestos was safe? And, of course, WHY?!

The asbestos industry has a long, well-documented history of manipulating medical professionals and medical evidence. Asbestos companies began doing this at McGill in the 1930s. I would love McGill investigators to first ask, then answer, this question: based on his published work, was McDonald a pawn of the asbestos industry, making his bizarre, dated conclusions based on evidence manipulated by companies, or a knave, willingly contributing to the legacy of misinformation and disease in Quebec and around the world in return for funding?

Take some time to listen to my talk. McGill is one of the most respected universities in Canada, and for good reason. However, in defending McDonald and deflecting criticism by waiting for a tumultuous semester to end and the public to lose interest, has McGill itself been a pawn or a knave in the past and present Quebec asbestos trade?

Jessica Van Horssen is a postdoctoral fellow in Quebec Environmental History at McGill/UQTR. She is primarily interested in the ways communities understand and internalize environmental contamination and risk, and the wide-reaching effects this can have. For the most part, she keeps her research to asbestos communities, but these are part of a much larger tradition of global resource towns.