This is the fourth in a weekly series of posts leading up to the mini-conference The War of 1812: Whose War was it Anyway? being held at the University of Waterloo on May 30th.

The Western Corridor War of 1812 Bicentennial Alliance (WCA) is one of 7 regions in Ontario set up by the Ministry of Tourism, Culture and Sport to commemorate the bicentennial of the War of 1812.

The WCA jointly coordinates activities for the bicentennial in the central region of Southwestern Ontario.  The corridor links communities, including the First Nations, from the western tip of Lake Ontario in Burlington running south-west, along the north side of the Lake Erie coastline, ending at Middlesex County.

Our mandate is to ensure broad connectivity to commemorate initiatives that foster the legacy left by the people, history and communities and that align with the provincial commemorative priorities.

Route 1812 is an historic driving trail throughout Southern Ontario highlighting the historic sites and stories from the War of 1812.  This loop of trails leads visitors from Fort York through to Hamilton, Brantford, London, and all the way to Windsor as it merges with The Tecumseh Parkway (red trail).  From Hamilton a visitor may travel through Stoney Creek down to the Grand River and across to the Talbot Trail.  A traveller may also choose to go south from Brantford, following the footsteps of General Isaac Brock to Port Dover; or journey down the Grand River learning how the river system was central to travel and communications. 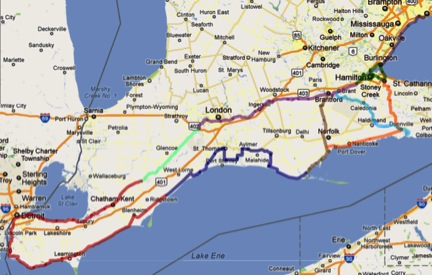 The map shows the trails of Route 1812. The different colours represent different sections of the route.

Several people had the vision to create a trail that followed the paths taken by First Nation Warriors and the militia and armies on both sides.  So the WCA stepped in to provide the resources to make it a reality.

A committee was formed consisting of local historians well versed in the activities of the war and who were willing volunteers to create the route.  They had to know where the old paths were and the sites along the way.  In all there were about 15 volunteers on the Route 1812 mapping committee. Historic information was the basis for the route, but modern roadways and scenic views were also a factor.  It took a year to develop the actual route.

Then we added the historic sites, museums and points of interest.  This list grew quite quickly.  We wanted to develop the history side of the route first.  We needed a solid base for the content; then we could look at the tourism side of things and marketing of the route.  This project is all about merging culture with tourism; finding that balance between historical accuracy and tourism interest and accessibility.

We used the Google mapping program, as it was accessible by all the committee members.  It has been an excellent source of information for a variety of people.  Graphic designers, mobile app creators, travel writers, etc.  It also allowed the public to see the map evolve over time.

As the route grew, so did the interest.  More activities were added and this in turn caused the route to grow.  More trails were added, more sites were plotted.  More tours were offered, more projects were developed.

The route is now finished in terms of the trails taken.  It could take a visitor an entire summer to travel the entire Route 1812 so the trails have been divided up into subsections for visitors, so they can do sections as they desire.

Working with volunteers can be very rewarding and a challenge.  They are helping you because they want to.  The historians that I found are passionate about the topic and want to share their knowledge. As they came from all parts of the route, we had to always meet in Brantford, as the most central location for all the members.  The historians had a great time discussing the issues and historical accounts to determine the best trail to take and the sites that needed to be marked.  Each member took a small section of the route, so all the areas were well represented.

As we develop travel packages and eventually road signs along the route, the WCA Steering Committee has acted as a go-between with the WCA and the relevant municipalities, as they have direct access to council offices to obtain support and necessary permissions. Fortunately all the municipalities want to see the route through their area, so cooperation from them should be obtainable.  However, each municipality has their own rules and regulations about road signage and the funding arms want to make sure that these signs will be cared for after the bicentennial is over and the WCA no longer exists.  So our next task will be to secure that municipal buy-in.  They will have to agree to insure the signs and take on the liability concerns and the maintenance of them over the next 10 years.

Route 1812 will be accessible through a Smartphone Application.  This app will show the route and all the historic sites.  Information on the sites will pop up on demand.  Stories, music and images will be used to tell the stories of the war as visitors travel along the route.  The app will also include local restaurants, hotels, shops and other tourist sites to visit in the area.

A three part documentary is being created to tell the story of the war in Southern Ontario by the Ontario Visual Heritage project.  Video clips and links from A Desert Between Us and Them: Raiders, Traitors and Refugees of the War of 1812 will be available to the travellers.   They will be able to visit the sites as seen on the film and learned in the classrooms.

Geocaching will add to the fun of exploring this historic route.  This is a treasure hunting game where you use a GPS to hide and seek containers with other participants in the activity.  The containers will be created to tell the stories of the war along the route.  This will be an activity that will last well beyond the bicentennial years and will engage the youth and adventurer travellers.

Then other ideas started to come.  The Barn Quilt Trails were born out of the Barn Quilts in Wardsville and as the organizers were on the Route committee as well, it was a natural link to expand the Barn Quilts to tell the 1812 story in the Western Corridor along Route 1812.  They tell the stories of the women and communities affected by the war.

Brock’s Walk has gone viral – in the real world; this is a one week event where people can follow Brock from Fort York to Port Dover from August 5th to 12th, 2012.  This involves museums, municipalities, volunteers, event planners, and corporate sponsorship.

Tour packages are now being developed along Route 1812.  The focus is on the experience tours.  What can people do?  Join in a quilting bee; help make a canoe; learn how to walk on stilts.

The map will showcase the route in a historic backdrop, highlighting the main sites along the way and will include a timeline of the war as it related to events in Upper Canada, along the route.  People can access endless historic information and timelines for the war, so we wanted to stay within the area that the route covers.  This includes the Western Corridor as well as the Southwest region of Ontario (what is the Tecumseh Parkway section of the route).

As the Route grows, more interest is generated.  The Southwest 1812 Region joined their Tecumseh Parkway, which tells the story of Procter’s Retreat from Windsor up the Longwoods Road towards London, to Route 1812 and now we are working on joining other trails throughout the other 1812 regions in Ontario.  If we can coordinate everyone’s trails, Route 1812 should be able to expand to the Maritimes in the east and up north to Sault Saint Marie. 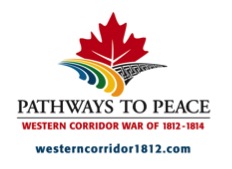 One thought on “The Development of the Route 1812”