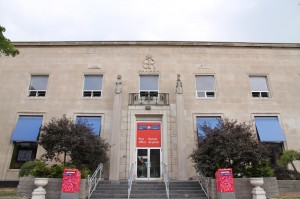 “Postal Station K!” Poetic resonance: none! Just one more slightly surplus postal station – in this age of electronic mail, a property easily unloaded, after all. A splendid spot on Yonge Street, in booming North Toronto, just perfect for a big condominium, with a shopping podium at sidewalk level. So sell it, right!

Now wait a minute. Take a good hard look at Station K. Look above the door, right between the lion and the unicorn. That’s “ER” – Elizabeth Regina, The Queen.

Ooops! Look again! Between the E and the R we have not “II” but “VIII”! Who in heaven’s name is that? Why, it’s Edward. Edward the Almost Eighth! The King Who Never Was, gave up the crown to marry Wallis Simpson and eke out his exiled life in love of Hitler. That “royal cipher” is a royal rarity. There are few indeed in Canada, or anywhere.

And keep on looking. On the facade, up high, in lozenges, we have the most modern transportation imaginable. In 1936. The expressest of trains, the zoomingest of bi-planes zipping down from geometric clouds, an athletic truck, a lunging ship.

Cool! Cool decor. And, after all, why not, as this building is a gem of Art Deco.

Just ready for the wrecker’s ball.

And then check out the benches. Popular. And check out the maple. Ailing. Salt damaged, like so many along our streets. Wade through the local pigeons (and remember that they are the lucky ones, not yet lunch for our local falcon family), and go across to the flagpole. And stop to read, in either official language, what stood here in the old days, before Station K was Station K.

Well, there was a hotel that burned down. Not on the plaque. But, before that, guess what stood here, at this splendid site of the next condo to hit the street:

OK folks, what is the lesson for us citizens?

I would say that lesson one is that you don’t sell off “the public realm” and privatize it without thinking.

Lesson two is that you don’t destroy a beautiful building just to make some money for the state.

Lesson three is that you don’t obliterate our history, be it national or local.

Lesson four, still to come, is that a buyer – and clearly the thing’s for sale – must never never demolish the structure. Nor can he or she be allowed to skin it alive and then wrap the facade, like some veneer, around a new glass box. The building, the old part (forget the featureless annex and the parking lot) deserves to stand, as is, no matter who buys it. And to have a use that involves the public, not be transformed into a lobby for a tower.

Now, what do we intelligent citizens do about this? Whom do we address? We can wrap ourselves in royal robes and address our royalist Prime Minister. We can halloo down at City Hall. We can alert the press. We can log on to Facebook and “friend” the “Friends of Postal Station K.”

But the larger thing, the one that matters, as history-minded activists and activist-inclined historians, is to engage the larger issue: how can we connect Toronto’s past, and pastness, with its presence, and its presents, in dialogue with “the state” on all its levels, and in conversation with capitalism too? Memory is a precious communal resource; we need to inject it back into our ever-evolving urban landscape, in every clever way we can imagine. But, to do that, we have to hold on to the material heritage, especially when, as here, it is so handsome.

Now: practical matters: Michael Colle, MPP for Station K, is in there, on our side, fighting and organizing. See his web page. And David Crombie, a neighbour, offers moral support. And Josh Matlow, councillor down here, is backing us. And Ken Greenberg, the famous planner, sends sympathy. We have friends in town. But we want more friends, so round them up and send them over. The more, the stronger we are. We are in rebellion mode, and eager for recruits.

Tom Cohen
History Department, York University
(Historian, it so happens, of Renaissance Rome, a city that displayed, deployed, and devoured its past: just ask assorted popes, or Mussolini)