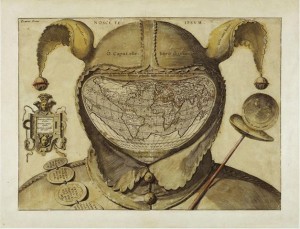 Being a world historian in Canada can be an odd thing. Two of the founders of the “new” world history – William McNeill and L. S. Stavrianos – had roots in British Columbia. Toronto and Vancouver have more immigrants per capita than almost every other city in North America. Canada is a gloriously multicultural state, relatively innocent of the hyperbolic nationalism that sees in its own history a unique recipe for excellence (one popular textbook is subtitled “A Country Nourished on Self-Doubt“). At the same time, that self-effacement makes Canadians no less interested in Canada. Canadian history looms large in our departmental curricula, and the histories of other places, especially non-western places, are typically shuffled off into a corner. Despite the efforts and vision of some of its members, the Canadian Historical Association is far more for historians of Canada than historians in Canada (see Tom Peace’s analysis on this website of topics presented at the CHA’s annual meetings). My last SSHRC application, for a world-history project, was classified (probably with some odd bedfellows) as “history (other)”–right beneath “history (nursing),” a worthy field, but not quite the history of humanity.

An awareness of the marginalization of the history of the wider, non-western world in a country that today is so profoundly influenced by and connected to that same wider-world motivated more serious study. Over the last three years Nicholas Guyatt (University of York), a half dozen long-suffering research assistants, and I worked through the professional websites of some twenty-five hundred historians at some of the “top” universities in the United States, the United Kingdom, and Canada. The results (found on our website) confirmed a great deal of our suspicions, and most of the surprises came from giving us a better sense of the magnitude of Western dominance over our history departments. Some 85% of our historians are working on the history of the West, a nebulous place which today contains only some 15% of the global population. Except for the University of London’s School of Oriental and African Studies, whose faculty complement most closely matches global population patterns (despite its explicitly regional focus), none of the departments we surveyed achieved even a 40% proportion of historians working beyond the West. 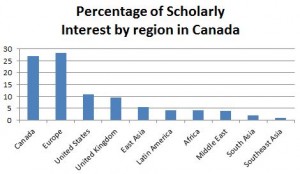 Canadian universities tend towards a middle ground between the American departments’ relatively broad geographical interests and the British departments’ extreme insularity. Our departments with strong regional emphases could compete with the second-tier American departments: Queens (Africa), SFU (Middle East), and especially UBC (East Asia). Also reassuring were the long-term trends, which suggested a slow but steady movement beyond the West for younger Canadian historians; similar trends have levelled off in the United States, and actually reversed in Britain. Importantly, though, world history (as distinct from, but related to wider-world history) did not fare well in our survey; even hyper-parochial Britain has more world historians, relative to the profession as a whole, than does Canada.

None of this is meant to suggest that we do not value Canadian history, or appreciate its own efforts to incorporate the histories of neglected or transnational Canadian populations. Among the many good reasons to emphasize Canadian history in Canada is its relative neglect abroad. Historians in Britain and especially in the United States pay no more attention to Canada than to the non-western countries. (Canadians today are some 0.5% of the world’s population, yet only 0.17% of historians in the United States work on Canada.) Abroad, Canada is in the wider world. 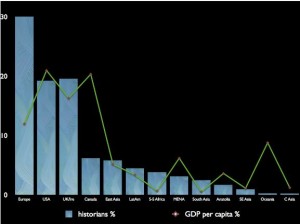 Historical Fields and GDP per capita

Although the British make us look cosmopolitan, in absolute terms our professional obsession with western history cannot be good for us or for our students. Distressingly, our survey found that the distribution of our historians correlated well with gross domestic production per capita–not absolute GDP, which would have suggested that societies of many poor people could pool their wealth to attract our attention. It also correlates well with fatalities in the west-versus-non-west conflicts of the late twentieth century. Thomas Friedman famously linked invasion to an absence of McDonald’s restaurants; we also find that having knowledge of a people’s history makes us less likely to bomb them. In another experiment to map global awareness, I asked my history undergraduates to list the most populated countries today. India and China aside, most students ignored Indonesia, Nigeria, and Brazil to list the old white dominions or newly war-torn lands, e.g. Australia and Afghanistan, each of which has some tenth the population of Indonesia. Our students are entering a global world with a western-centred geography of knowledge that might have served them well at the Congress of Vienna. To correct this, we will need to reassess how we teach, research, and–especially–hire new colleagues.

Luke Clossey is an associate professor of history at Simon Fraser University.  A synthesis of his study can be found in May’s issue of Perspectives.