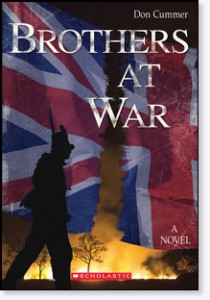 I can understand if there are people who scoff at the thought of another book on the War of 1812. Given the onslaught of commemoration of the war over the past two years, I’ve definitely sensed some fatigue on the part of some historians. From the television commercials to museum exhibitions to two episodes of the History Slam podcast, the War of 1812 has been almost inescapable lately. As a result, some people might view Brothers At War by Don Cummer as yet another work of commemoration. Those people would be greatly mistaken, however, and missing out on a terrific book.

Brothers At War is not a history of the War of 1812, but rather a historical fiction set in Upper Canada during the months leading to war. The story follows adolescent best friends Jacob and Eli as they deal with bullies and bad teachers, but under the surface something greater is brewing. With the story being set against the coming of war, the fact that Eli is an American immigrant and his father has refused to take the oath of allegiance to the King adds tension to the story. It is not a book about the War, but rather a book whose characters are affected by the War.

While the book’s intended audience is 8-14 year-old kids, the subject matter speaks to adults. While it’s easy to see how younger readers would enjoy the book, the principal themes of trust, loyalty, and fear are universal and Jacob and Eli’s relationship can elicit a strong sense of nostalgia in adult readers. During our interview, Cummer told me that he thought everyone had an inner 12-year-old and, for as much as adults can relate to the material, it is that connection to our inner child that makes Brother At War a captivating work of literature.

One of the book’s strengths is the sense of mystery throughout. Cummer told me that a book is like an iceberg, where a majority of it is unseen although we know it’s there. The sense of anxiety that is beautifully strung throughout the story reinforces this concept because so much of it is boiling under the surface. Part of this comes from knowing that a war is coming, but the universality of the themes creates a natural tension that draws in the reader and creates a connection to the characters.

Historical fiction can be a difficult genre to master as it can lend itself to predictability or campiness. But that is not the case here. Cummer admits to taking some creative liberties, but it doesn’t appear to compromise his re-creation of the early nineteenth century. Real figures like Isaac Brock may be stylized, but not to the point of becoming caricatures. As such, Brothers At War tells a charming story in a realistic setting that should appeal to audiences of all ages.

In this episode of the History Slam podcast, I talk with Don Cummer about the book. We also chat about the place of historical fiction, how the past is taught in schools, and how to get people interested in history.