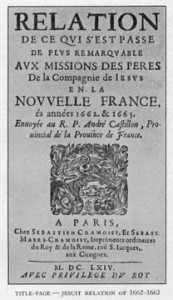 Reuben Gold Thwaites died in 1913, the same year of the final publication of his seventy-two volume The Jesuit Relations and Allied Documents, Travels and Explorations of the Jesuit Missionaries in New France, 1610-1791. One hundred years later they are still a valuable and widely circulated edited collection.

It was Thwaites’ intention to create a collection of previously spread out and “buried” materials that could be made easily accessible to undergraduate history students. In addition, he wanted the material to be made understandable to a general audience, which is why he included English translations of the original, Latin, Italian and French. This first attempt to translate the entire Relations is arguably one of the reasons why this particular collection has continued to do so well. The collection is not exclusive and little training or background knowledge is needed for a full comprehension of the information provided.

Thwaites’ inclusion of detailed Introductions, Summaries, Notes and an Analytical Index are almost just as valuable as the primary texts themselves. The amount of information provided concerning biographical sketches and place names give readers an added layer of what would otherwise be an incredibly daunting task of doing this research themselves. Details that are separated throughout the Jesuits’ reports, for instance, are drawn together in a coherent context so that it is possible to ascertain that the Wendat civil chief Aenon, who is mentioned in the Relations of 1636, is the same Aënon who ‘s death is recorded at Trois Rivières in 1637 (JR 12:2). 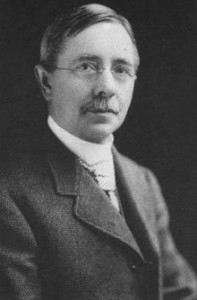 Some might criticize Thwaites’ supplemental writings as dated and offensive— steeped in overt late 19th century prejudices. This is most certainly true when Thwaites articulates both racist and Eurocentric observations of North America’s Native populations. In his Introduction alone he refers to “heathen nations” (JR 1: 4), “savages” (JR 1:5), and “Red Indians”(JR 1:7). He extends this discourse further as he describes the Haudenosaunee (Iroquois) as the “craftiest, most daring, and most intelligent of North American Indians, yet still in the savage hunter state, [they] were the terror of every native band east of the Mississippi, before the coming of the whites, who in turn learned to dread their ferocious power (JR 1: 9-10).” Yet, just as one must historicize the Jesuits as products of their culture and time period, readers can do the same with Thwaites, sifting through his biases to get at the historical data.

Today there are other ways of accessing the Jesuit Relations. Lucien Campeau, for instance, has published a similar edited collection, Monumenta Novae Franciae (1967-1987), that includes documents not found in the Thwaites version. Yet, the Thwaites collection has not lost its appeal. Gone are the days when historians lugged home the dusty hardcover copies from the library, or squinted over the microfilm reels (although you can still do this). Today, one only needs to do a quick internet search and several digitized versions will appear such as those available at the Library and Archives Canada, as well as transcribed versions such as those reproduced by Creighton University. Thus, in 2013, it is still the most accessible comprehensive collection and will perhaps remain so for another hundred years.

Kathryn Magee Labelle is an assistant professor at the University of Saskatchewan.

One thought on “Reuben Gold Thwaites and The Jesuit Relations: 100 Years”