If Canadians were asked to describe the cuisine or foodways of rural Canada, it is unlikely that terms like modern or cosmopolitan or adventurous would be high on the list. Rural is often used as a stand-in for a static vision of the traditional, the conservative, and the simple when it comes to food and eating. But, as the first set of podcasts “Rural Foodscapes and the Taste of Modernity” suggest, the diets and foodways of rural inhabitants were every bit as interesting and subject to changing social, cultural, scientific, and gastronomic trends as their urban counterparts. 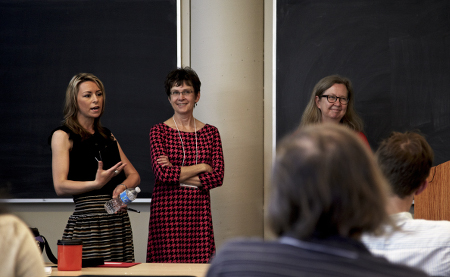 The three talks included below approach rural life and foodways through a range of different lenses, including barn raising bees, household advice manuals, and ‘exotic’ foreign food fairs in rural Ontario. All of the individual talks, however, are connected by a common theme of the ways in which food was used as a means of defining what constituted “the good life”, in all its myriad meanings, in rural Ontario during the nineteenth and twentieth centuries. Not only was food used as a means to show one’s education and worldliness, but to make important connections within close-knit rural communities. Rural Ontarians, these talks all show, were thoroughly modern and, like their urban counterparts, used food to navigate the terrain of a rapidly changing world.

Rebecca Beausaert, “The World on a Plate: Food and Fictive Travel in Late-Nineteenth and Early-Twentieth Century Rural and Small-Town Ontario.”

To listen to Rebecca’s talk, click here (or save by right-clicking and selecting ‘save file as’).

As Rebecca Beausaert shows in her talk, residents of rural and small-town Ontario faced a barrage of criticism from politicians and social critics who viewed their societies as anti-modern, culturally-backward, and technologically deprived around the turn of the century. While some communities were indeed struggling, others were thriving. The small towns of Tillsonburg and Ingersoll, for instance, located in Oxford County approximately 200 kilometres southwest of Toronto were, in many ways, the direct opposite of what outsiders considered “dour small-town life” to be. Both male and female residents enjoyed active social lives with a diverse range of leisure options available to them. Increasingly, a number of these amusements were incorporating trendy “around-the-world” themes and features. Travel clubs, garden parties, and fundraising fairs, in particular, became choice venues for mimicking cultural practices, such as preparing “traditional” grub.

As Beausaert shows, food often played the starring role at these events as participants strove to display a more “cosmopolitan ethos” through the consumption of what they perceived to be exotic and atypical cuisine. Eating potato cakes, pretzels, and watermelons, for example, allowed participants to briefly “travel imaginatively” to Ireland, Germany, and the American south. Building on recent studies of colonialism and consumption, Beausaert shows how rural and small-town Ontarians enjoyed incorporating so-called “ethnic foods” into their leisure activities as a way to debunk the myth that they belonged to close-minded societies devoid of cultural enlightenment. Examining the avenues through which ideas for “fictive travelling” were communicated to rural citizens also suggests that links between city and country were actually much stronger than previously assumed. Indeed, by the turn of the century, rural and small-town Ontarians had become eager appropriators of urban, middle-class cultures, and food was one of the more popular ways to embody notions of cosmopolitanism.

To listen to Nathalie’s talk, click here (or save by right-clicking and selecting ‘save file as’).

Dairy products have been the source of heated controversy during Canada’s history that included rumblings about whether Canadians would be better to spread butter or margarine on their bread, or to have access to cheese made from unpasteurized milk. We are currently witnessing heightened food sensitivities — particularly to dairy products, as well as to nuts and gluten — that prompt us to revisit the nutritional value of these products in addition to ways in which they can be rendered safer for human consumption. In significant ways, Nathalie Cooke shows in her talk, these kinds of present-day analyses follow in the footsteps of work of earlier Canadian food advocates whose research into food safety transformed not only Canadian dietary regulations but also ways in which Canadians were educated to think about and prepare food in our own homes.

Cooke’s talk therefore focuses on the period of culinary consolidation in Canada, bookended by the work of two formidable pioneers of food safety in Canada: Catharine Parr Traill and Adelaide Hoodless. By focusing on the substantial portion of Traill’s oeuvre devoted to exploring ways to safely prepare and preserve food despite adverse circumstances in the New World – as well as the role of Adelaide Hoodless, whose research into liquid milk specifically, and campaign to usher into Canada an era of domestic hygiene in Canadian homes and domestic science education in its schools more generally – Cooke points to some of the ways in which these culinary pioneers significantly directed Canadian food practice and policy to the present day.

Catherine Anne Wilson, “‘Can She Bake a Cherry Pie?’ Harvest Meals and Foodscapes of Plenty in Rural Ontario.”

To listen to Catherine’s talk, click here (or save by right-clicking and selecting ‘save file as’).

And, finally, Catherine Anne Wilson’s lively talk explores the role of food provided by the host family at reciprocal work bees (barn raisings, threshing bees, quilting bees, etc.) in nineteenth and twentieth century Ontario.  “Plentiful and sumptuous” meals, she argues, were an expected and important way to attract workers to the event, to keep them stimulated and energized at their work throughout the day, and to pay them back for their labours.  The offering up of abundant, tasty, appropriate food not only kept workers satisfied, but also was a performance valued for its ability to entertain guests, express the host’s status in the neighbourhood, showcase the talents of farm women, and create long lasting memories.  Pie, for example was a very social food being easily divided and varied enough in its filling to suit every taste.  It was also telling of a woman’s ability in the kitchen and figured largely in stories and jokes about food at work bees. Wilson therefore makes extensive use of a range of sources including farm diaries, cookbooks, and reminiscences to demonstrate the changing nature of these meals.  The timing, preparations, settings, menus, service, competitions and complaints, Wilson persuasively argues, help us to understand the importance of harvest meals in rural hospitality.