When University of Saskatchewan professor Erika Dyck began investigating the use of lysergic acid diethylamide (commonly known as LSD) in psychiatric research, she was surprised at what she found. LSD has a bad reputation, to say the least. It’s widely seen as a dangerous drug that leaves its victims permanently damaged and prone to debilitating flashbacks. LSD has also been used in some decidedly unethical CIA-funded experiments. Yet there was a time when medical researchers saw LSD as a promising therapeutic treatment. Dyck describes Psychedelic Psychiatry as the result of her quest to understand the dichotomy between the public perception of the drug and its early history.

When Albert Hoffman, a Swiss biochemist, inadvertently discovered LSD’s mind-altering effects in 1943, other scientists very quickly saw it as a possible means of understanding mental disorders, particularly schizophrenia. Dyck tells the fascinating story of one such study conducted at the provincial Mental Hospital in Weyburn, Saskatchewan in the 1950s. 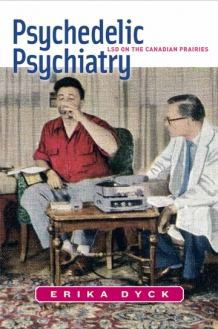 Abram Hoffer, a Saskatchewan-born psychiatrist with a background in chemistry, was hired by the province in 1950 to develop a research program in psychiatry. Humphry Osmond, also a psychiatrist, came to Weyburn from England in 1951, having already begun using hallucinogenic drugs to investigate schizophrenia. The two soon began collaborating on what would become a large and influential study. Hoffer and Osmond believed they could use LSD to induce a “model psychosis” (37), which would help them understand the chemical process that caused schizophrenia, and even possibly lead to a cure.

Soon after beginning that line of investigation, they set up additional experiments that tested LSD as a treatment for alcohol addiction.

Hoffer and Osmond took the remarkable step of trying LSD themselves before recruiting volunteers. They encouraged staff at the Weyburn hospital to also try LSD, as a way to build empathy with their patients and help them through what was, for many, an indescribable experience.

This research was significant in a couple of ways. It came along at the beginning of a shift toward biological models of mental illness, and proposed an alternative to psychoanalysis on the one hand, or physical treatments like electroconvulsive therapy on the other. And it played a considerable role in redefining alcoholism as a disease.

In other important ways, though, Hoffer and Osmond were at odds with common practice. At a time when researchers increasingly tried to make drug trials more objective, Hoffer and Osmond’s approach allowed for a complex, subjective experience. In fact, for alcoholic patients the LSD experience itself, which often involved a spiritual dimension, seemed to offer therapeutic benefits. That subjectivity was essential to their experimental model, but it also meant that the wider medical community didn’t always take their work seriously.

One of Dyck’s main points is that drug regulation is “inseparable from its cultural context” (137). In the last two chapters she shows how, in the 1960s, that cultural context put an end to LSD research. A widespread hysteria over LSD developed in the ’60s; in the public mind the drug was linked with youth counterculture, dangerous behavior, and rampant recreational drug use. Dyck demonstrates through contemporary news accounts that the media overstated the situation and amplified the moral panic around LSD.

The combination of sensational publicity, public fear, and the drug’s popularity for non-medical use made it increasingly difficult for researchers to secure grant funding, retain staff, and find unbiased volunteers. At the same time, the Canadian government responded to cultural pressures by restricting access to LSD and then, in 1968, by making it completely illegal.

In her conclusion, Dyck notes that research on LSD and other hallucinogenic drugs has revived in recent years, drawing on lessons from the work done in the ’50s. How far that research can go, considering the highly politicized nature of drug policies today, is very much an open question.

Although short, the book is packed with detail gleaned from correspondence, reports of test subjects, and other primary sources. The writing is accessible, and because it touches equally on medical and cultural history, Psychedelic Psychiatry will be of interest to a fairly wide range of readers. It constructs a vivid picture of an exciting moment in medical history. Unfortunately, the chronology of the narrative is sometimes unclear, with occasionally not enough help to the reader to sort out the sequence of events. A few tantalizing questions are left unanswered: For what purpose was LSD developed in the first place? How does Hoffer and Osmond’s conception of schizophrenia, a mix of the biochemical and the psychological, compare with how it’s viewed today? What became of the two scientists in the end?

But this is not meant to be a comprehensive history of LSD in Canada. Rather, it’s a case study in the complexities of drug research and regulation, and of the inescapable effect of moral, professional and political pressures on that research.

Joanne Epp is a Saskatchewan-born poet with an interest in history. She lives in Winnipeg.