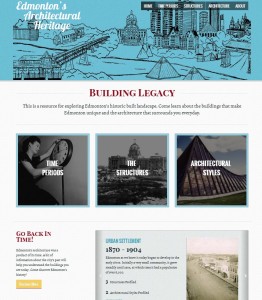 When you think of important events in your life, chances are you associate them with physical places. Whether it is your childhood home, a former school, or a family cottage or favourite vacation spot, the connection between memory and place is intangible, though very real. People are connected to the buildings in their city. They have lived their lives in and around them, and many of these structures hold a special place in their personal narratives.

Defining memory can be difficult. For the purposes of this post, I will follow the definition provided by John Bodnar, who states that public (or collective) memory is not simply a time dimension between past and present, but is the interpretation of reality. Peter Burke describes five ways in which memory is transmitted: oral traditions, written documents, still or moving pictures, actions (dance, craft etc.), and space. Randall Mason in his article “Fixing Historic Preservation” argues historic preservation is the cultivation of society’s collective memory, and believes historic fabric, such as buildings, is essential to sustaining memory. To support this, he quotes sociologist Maurice Halbwachs, who said “it is the spatial image alone that, by reason of its stability, gives us an illusion of not having changed through time and of retrieving the past in the present.” 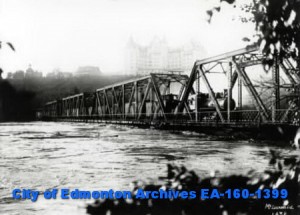 An example of Halwachs’ idea can be seen in this photo of a train holding down the Low Level Bridge during Edmonton’s 1915 flood. It could be anywhere, but for the Hotel Macdonald looming over the shot. This makes it quintessentially Edmonton, and I think is the reason for its resonance with viewers, and why it is the most commonly reproduced image at the City of Edmonton Archives.

The Edmonton Historical Board and the City of Edmonton Archives are helping to preserve and nurture collective memory in Edmonton through a website that explores the city’s built heritage: www.edmontonsarchitecturalheritage.ca.

The website is an endeavour of the Edmonton Historical Board (EHB) with support from the City of Edmonton Archives. The EHB is an advisory board to City Council which offers guidance to City Council on matters relating to historical issues and heritage policies; and encourages, promotes, and advocates for the preservation and safeguarding of historical properties, resources, communities, and documentary heritage.

Edmonton’s Architectural Heritage introduces users to twenty-two different architectural styles in Edmonton, from the 1800s to the early 1970s. The site profiles over seventy different buildings, explaining their history and how they exemplify the style as it appears in Edmonton, including iconic structures like the Alberta Legislature, more common homes like the Craftsman style McTaggart Residence, and everything in between. 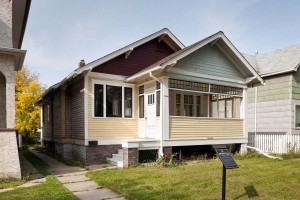 The McTaggart Residence was built in 1922 and is a good example of a common style of residential architecture in Edmonton from the mid-1910s to the early 1930s. Photo by James Dow, courtesy of City of Edmonton Sustainable Development.

In the future more styles and buildings may be added, and a neighbourhood feature is also being planned, whereby historic communities will be highlighted and will serve as another point of access for the buildings and styles profiled in the site.

Exhibits are a way for people to engage with the past. This online exhibit focuses on built heritage, largely because that is the focus of the EHB. However, in terms of the development of public memory, built heritage has the benefit of being ubiquitous. Buildings are where we live, work and play.

A great outcome for this website would be for visitors to get a better understanding of what makes Edmonton unique. In a city of strip malls, box stores and giant parking lots, it is an important reminder that Edmonton is more than suburban sprawl and “nowhere architecture”. A sense of place encourages civic pride and a sense of stewardship for our historic resources. This greater understanding for, and respect of, our city’s built heritage might translate into greater pressure for the conservation of historic resources. If people know a building’s past they might be more likely to try to save it.

We want people to see buildings not just as physical objects, but to actively read them. When was this built and why? What materials were used? Are there additions? When were these built and why? How does this building contribute to the character of the street or neighbourhood? How does it reflect and embody the city’s history?

If successful, the hope is that Edmontonians will engage with the past more often, and if really successful, they won’t always be aware they are doing it. We want to develop a greater historical consciousness, to make people aware of their everyday surroundings and have them see their environment through an historical lens.