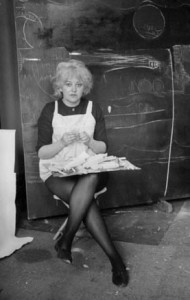 When British Labour politician Tony Benn passed away this March, attention was drawn to his efforts in the British Houses of Parliament to install plaques that told histories of the suffrage movement in Britain. Among them was one he installed illegally in the broom closet where Emily Wilding Davison, a suffragist, hid on the night of the 1911 census, so as to be able to legally declare her address as the House of Commons, thus highlighting political inequality.

Toronto is welcoming historians of gender, sexuality, and women’s history to the 2014 Berkshire Conference, and this provides an opportunity to highlight and reflect on the history of women and gender within the context of historical plaques in the city. Heritage Toronto will do so on Thursday May 22, when it unveils three plaques to commemorate prominent women who spent time living or working in Toronto. Part of its Legacy Plaque series, which is inspired from English Heritage’s “blue plaque” scheme, these plaques mark a step towards greater inclusion of women within our public history narrative.

In 2012, Ian Milligan used topic modelling to take a big-picture look at all plaques in Toronto: What he found is that through plaques, we can track perceptions about our past over time. This holds true for plaques broadly, as well as themes. For instance, as we move away from the Modern period of architecture, we gain historical distance and are more likely to feel nostalgia towards it and recognize it as having heritage value.

The three types of plaques that one most often sees in Toronto – municipal, provincial, and federal –operate on an application basis. This means that in order for a plaque to be erected, someone has to submit an application to the pertinent body. Among the greatest challenges this model presents is that applicants must have the financial, intellectual, and temporal means and resources to advocate for subject matter. Governmental bodies also have criteria (Heritage Toronto’s can be found on its website), such as establishing historical distance from the subject matter, either through the passage of time or the death of the individual. As historians, we recognize the value of chronological distance from our subject matter: Through the passage of time, we gain better understanding, perspective, and context that are invaluable to our work. This presents an understandable obstacle in commemorating, through plaques, more recent subject matter, including but not limited to culturally diverse communities.

However, there are instances worth highlighting for those visiting Toronto for the Berks or Torontonians who want to explore the experiences of some notable women and collective groups in this city. I have attempted to assemble a large selection of them into a Google Map, and copies of this map will be available for visitors to the Berks at the Information Table during the conference, and at the plaque presentation.

There are a few plaques on the University of Toronto campus that interpret the history of women’s access to higher education and activism at the university to ensure gender and sexual equality. A plaque at Annesley Hall tells the story of the early women’s residence at the University, which opened in 1903. Leading scientists and engineers, such as Maud Lenora Menten and Elsie Magill have also been recognized with plaques on the campus. In 2011, the Ontario Heritage Trust commemorated the University of Toronto’s early sexual diversity activism and the University of Toronto Homophile Association, the first organization of its kind at a Canadian university. This plaque, placed near Hart House where many of the Berkshire events will be taking place, highlights early queer activism in Toronto and its efforts to counter prejudice.

Elsewhere, the city is dotted with plaques commemorating notable women in the city’s past: In 2009, Heritage Toronto and the Ontario Black History Society unveiled a plaque to commemorate Mary Ann Shadd Cary, an anti-slavery activist and advocate for the rights of women. After the passing of the Fugitive Slave Act in 1850, Shadd, as well as many other escaped and free African Americans, sought refuge in Canada. Shadd lived in Windsor, then came to Toronto where she published the newspaper Provincial Freeman on King Street East from 1854 until 1855.

Beginning in 2009, Heritage Toronto partnered with the Toronto Legacy Project, a group spearheaded by the city’s first Poet Laureate, Dennis Lee. This series commemorates individuals of national or international renown in the places where they lived and worked. Canadian scholars visiting Massey College as part of the Berkshire Conference will recognize Robertson Davies’ blue Legacy Plaque; he was the College’s first master. While Robertson Davies’ is the only blue Legacy Plaque installed on the university campus, Heritage Toronto will be unveiling three more at University College on May 22 – you can RSVP here. The three subjects – anarchist Emma Goldman, artist Joyce Wieland, and aviator Amelia Earhart – had vastly differently experiences during their time in Toronto, but each contributed to how we view and understand the city. Similarly, plaques for writer Anna Jameson, urban activist Jane Jacobs, and National Ballet of Canada founder and artistic director Celia Franca – whom the program has already commemorated – provide Toronto the necessary opportunity to tell stories of those who came from elsewhere, sometimes seeking safety and refuge, bringing with them their talents and ingenuity.

There are, without doubt, many more stories that Toronto can tell about its past, as it builds its future. Join Heritage Toronto and the Toronto Legacy Project on May 22 to see the new Legacy Plaques and find out how you can contribute to telling Toronto’s stories.