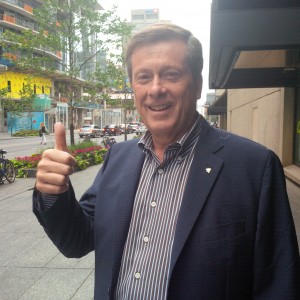 Darkness has lifted over Toronto. While that might be temporary, it does not make that arrangement any less welcome. With the election of Mayor elect John Tory Toronto is no longer led by a man who is frequently described as addicted, angry, and insulting. To the best of our knowledge, John Tory carries no such labels. So…we have progress.

On a chilly July morning rounding a corner on foot in Toronto’s midtown, I all but bumped into Tory. I was headed for an early swim. He was rushing somewhere. I introduced myself and asked whether he thought Rob Ford, who was just about to return to public life from an addiction rehabilitation programme, should stay in the mayoral race. Tory was unequivocal in his response. He said Ford had lost his moral authority to govern and should step down. Tory added that Ford should be entitled to run for re-election, but only after resigning as mayor. Ford stayed in the race at that time but subsequently withdrew due to a cancer diagnosis and was essentially replaced on the ballot by his older brother and political partner Doug.

Looking back on that day it appears that Tory’s call for Ford’s resignation was one of the factors that distinguished him from Olivia Chow just as polls began to show her one-time sizeable lead slipping away. At that juncture, Chow was saying that she believed in “redemption,” and that Ford’s political future would be decided by the voters. I came away from my brief encounter with Tory that morning impressed by the man’s alert, polite forthrightness. I also took a picture for which he immediately assumed campaign posture. “He’s a pro,” I thought to myself.

Many of us delight in the prospect of Toronto’s recovery from the dark days of Ford governance. At the same time the challenges ahead for John Tory are daunting and the sort of progress that he represents unclear. Tory’s victory might be interpreted as a return of Red Tory-ism to Toronto. Tory cut his political teeth in the early 1980s working as principal secretary and associate secretary to the cabinet of former Ontario premier Bill Davis, the self-styled king of bland. Davis, unlike some polarizing American republicans and Canadian conservatives of the twenty-first century, governed from the centre. In Tory’s campaign appeals to Toronto’s diverse communities and his running head slogans of making the city “a beacon of respect for everyone,” he effectively reached beyond his privileged downtown base to win the election.

Last night’s result represents a victory for the Toronto business and political establishment of which John Tory is a charter member. I trust it’s not too much of a buzz kill to point out that the two leading conservative wealthy Caucasian males in the race – Tory and Doug Ford – won almost 75% of the votes (Tory 40% – Ford 34% – Chow 23%.) The diminutive Asian Canadian Chow, a female immigrant who speaks accented English, didn’t attain the 25% mark despite a lengthy record of accomplishment in municipal and federal politics. Perhaps Chow’s allegiance to the New Democratic Party formerly led by her deceased husband Jack Layton and her left leaning pronouncements on poverty and social justice were actually turn-offs in Toronto the good. True to his Red Tory roots and no doubt recognising the critical core support she represents, Tory extravagantly praised Chow in his acceptance speech and all but made her a job offer.

The campaign turned on public transit. In the final weeks of the campaign as his lead and Chow’s collapse was consistently evinced by polling numbers that increasingly showed the ABF (anyone but Ford) vote coalescing around Tory, he withstood criticism of his so-called SmartTrack plan. With SmartTrack, Tory claims that he can connect existing and underutilised rail lines to create a hugely expensive ($2.7 billion) revitalised urban transit network in 7 years. Tory’s gambit relies on tax increment financing (TIF) which was pioneered in California in 1952 and has been tried in a variety of forms since by many American states. Essentially TIF allows governments to borrow against anticipated tax revenue gains for development projects in specifically designated urban areas.

TIF relies on tight cooperation between government and urban developers. The Toronto Star’s Daniel Dale suggests there is little evidence TIF can work as the basis for public transit development on the massive scale Tory’s proposing. In California itself, current governor Jerry Brown has moved away from TIF schemes because of the tax losses they represent for the indebted state. One wonders how Tory and Liberal Ontario premier Kathleen Wynne will be able to forego significant tax revenue to build public transit in Toronto while Wynne has simultaneously vowed to undo Ontario’s large deficit.

Like Wynne, Tory bailed on a fully funded light rail transit (LRT) proposal to Scarborough on the city’s east side in favour of constructing a subway line at much greater cost. Wynne had previously joined forces with the Fords on the issue in order to win a by-election that was critical for the survival of her then minority government. In last night’s election, Chow’s defence of Scarborough LRT and her detailed proposals for more immediate, practical action on public transit were defeated. Wynne, currently leading a trade mission to China, proclaimed “Hallelujah,” at news of Tory’s victory. Ontarians are about to witness what a partnership of Red Tory mayor and Ontario Liberal premier can achieve in a de-industrialising Toronto.

One certainly hopes that last night’s result means a shift of political culture. Tory will face his greatest challenge in making that meaningful. The Fords represent a politics of overt meanness and anger that had not previously succeeded in Toronto. A city which once elected the likes of  “tiny perfect” Red Tory David Crombie (1972-78), who proffered a late campaign endorsement of Tory, and the cosmopolitan one-time NDPer David Miller (2003-10) turned overtly to the right in 2010 with Rob Ford. The Fords built, and maintain, a sizeable following by loudly deriding environmentalists, social justice activists and bicyclists while championing use of the automobile and proposing subways that will not be constructed in their lifetimes. Their so-called ‘Ford Nation’ includes large numbers of disaffected recent immigrants to the sprawling Toronto suburbs and some youth who seem dazzled by the Fords’ celebrity status garnered by Rob’s bad habits. The Fords intelligently capitalized on the political opportunity created by the 1998 amalgamation of Toronto’s downtown and boroughs engineered by the Mike Harris government. They exploited the economic and cultural divisions between under serviced periphery and an allegedly favoured city centre. The fact remains that the Fords’ incessant appeals to the rights of  “taxpayers” and their attacks on demonised “elites” can have winning appeal in a Tea Party North America. It would be naïve to assume that last night’s victory by John Tory entirely effaces those political realities.

James Cullingham is a Journalism professor at Seneca College and documentary film maker with his Tamarack Productions in Toronto. His most recent film is In Search of Blind Joe Death – The Saga of John Fahey.