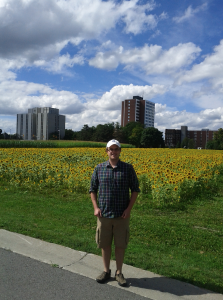 Pete Anderson posing near the threatened experimental plots with the Civic Hospital in the background. Photo credit: Laura Cameron.

On November 3rd, John Baird announced that Agriculture and Agri-Food Canada transferred approximately 24 hectares (60 acres) of the Central Experimental Farm, in Ottawa, to the National Capital Commission. The NCC in turn offered to lease the land to the Ottawa Hospital to build a new Civic Campus. The Hospital then mused about the using this new land as a parking lot.

Established in 1886, the Farm played an important role in Sir John A Macdonald’s plans for the colonization of the Canadian prairies after the completion of the Canada Pacific Railway and the military defeat of Métis and First Nation communities in the West in 1885. Located well outside of the city when it was founded, today the Farm is completely surrounded by Ottawa. In 1998 it was designated a National Historic Site of Canada. The Farm remains an important federal agricultural science research station and a popular park for the people of Ottawa.

While I have argued elsewhere against the current threat faced by the Farm [1], in this post I explore the discourses that arose immediately after the announcement. Particularly, I am interested in the ways history and science are discursively vacated by the text and maps in news stories about the Farm.

Words
With some notable exceptions [2], published commentary on the grant look at the value offered by a new hospital with a nod to the nearly hundred year history of the Civic Hospital. These arguments applaud Baird for his generous act and some even suggest further division of the Farm to create a ‘central park’ for the city. Many online commenters agree with the journalists and columnists, with a few pushing for the complete subdivision and sale of the Farm.

Discursively emptied of ongoing scientific research activities and of its own rich history, the Farm is construed as under- and even mis-utilized land waiting for urban development. Politicians like Baird and columnists like Randall Denley exercise what Jennifer Bonnell terms ‘imaginative control’ where people in positions of power see what they want to see, and thereby create certain possible futures for a site while closing off others. Rather than the imperial gaze in Bonnell’s account, Baird, Denley, and online commenters look over the Farm with a developer’s gaze, seeing scientifically productive land as “untapped, wasted” just waiting for condos, single-family homes, hospitals, and parking lots [3].

As David Reevely of the Ottawa Citizen put it: “What John Baird wants, Ottawa gets”. In an interview with CBC Ottawa Morning, Ottawa Hospital CEO Jack Kitts mentions his plans to engage with the community before developing the land. However, the decision to open part of the Farm to hospital development came without public consultation and interest groups such as the Friends of the Farm and, according to Friends’ President Eric Jones [note: pdf], the Farm’s heritage advisory council, which is responsible for long term planning, were not approached before the news was released.

Groups who may have advised against the division of the Farm were excluded from and effectively silenced in official discourse. In addition, the chilly climate imposed by the government on communication by civil servants makes it difficult to know what the scientists working at the Farm or heritage officials at Parks Canada think about the move.

Maps
Maps used in news stories convey senses of place and scale to those unfamiliar with where an event takes place. As necessarily imperfect representations of portions of the world, maps convey stories both through what they include and what they leave out. In this case, none of the maps used in news reports accurately represent the Farm, demonstrating and reinforcing a wider lack of public understanding about the physical size and scale of scientific work performed at the Farm. 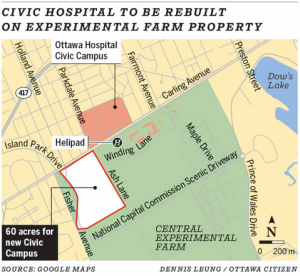 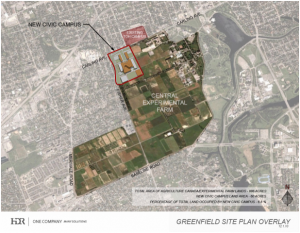 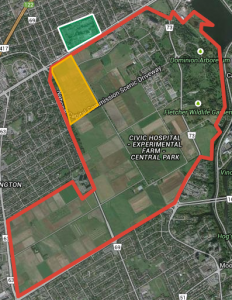 Comparing the maps from the Ottawa Citizen and MetroNews with one I created shows a few interesting points of contrast. For example, the Dominion Arboretum and the Fletcher Wildlife Garden are frequently left off maps of the Farm. The reason may lie in the visual disjunction between these treed landscapes and the experimental plots that cover much of the Farm’s grounds.

Whereas today the fields of the Eastern Cereal and Oilseed Research Centre dominate the landscape, the Arboretum and Wildlife Garden are park-like spaces. In the spirit of the Victorian era desire to coax the working classes into carefully tended nature, early Farm scientists made their science beautiful, of which the Arboretum is the best surviving example [4]. The Wildlife Garden, on the other hand, represents a late-twentieth century urge to rewild urban spaces and resembles a tiny conservation area. In a way, the federal and citizen science undertaken in these locations is obscured by their aesthetic appearance.

These maps show seemingly empty fields and Kelsey Jones, writing for iPolitics, states that the Farm itself doesn’t have solid plans for the parcel being leased to the Ottawa Hospital. This too ignores the longer scientific history of the site. As Julie Harris notes, these “‘empty fields’ are, in fact, open-air laboratories where important agricultural research continues to be conducted” and finding land on which detailed scientific data has been recorded for over a century anywhere in Eastern Ontario, let alone the rest of Canada, is next to impossible. The visually vacated fields are deep archives of Canadian agricultural science.

Conclusion
The discourses that render the Farm empty, misused land ripe for development are a threat to both federal science capacity and the value of national heritage designations. Read outside the context of the Farm’s past and present uses, it’s easy to accept these accounts and agree that the open fields are an excellent location for a new hospital campus. However, read alongside attacks on Library and Archives Canada, the Experimental Lakes Area, the Department of Justice Canada research division, and libraries at Environment Canada the story plays out very differently.

The discursive context is important and is something that we, as active historians, can bring to the table in our public writing. At a time when the federal government is renaming parkways in Ottawa after Sir John A Macdonald and Sir George-Étienne Cartier we can point out the ways and places where their legacies are being chipped away through the general decline of federal research institutions and the specific paving over of one corner of the Central Experimental Farm.

Peter Anderson is a PhD Candidate in Geography at Queen’s University, Kingston, where he studies the historical and cultural geographies of the Central Experimental Farm. He can be found online at Twitter @dairpo and at his website, History Applied.

[1] In addition to my op-ed, I have captured my initial tweetstorms using Storify.