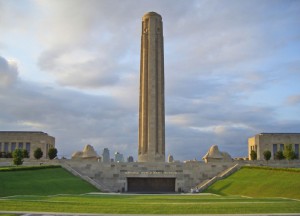 I found out about the National World War I Museum during a recent conference trip – yes, to Kansas City. I was curious to see how it would memorialise a conflict that, for most Americans, is greatly overshadowed by its successor, and decided to visit. The museum is intertwined with the Liberty Memorial, dedicated in 1926 to honor the sacrifices of those who fought for their country. The museum aims to go beyond reverence, according to its mission statement to “inspire thought, dialogue and learning to make the experience of the World War I era meaningful and relevant for present and future generations.” It certainly succeeds in engaging visitors through clear stories and thought-provoking artifacts. It’s worth visiting, and an excellent teaching resource.

There are many things to be said about the genuinely interesting exhibits, innovative multimedia resources, and friendly and knowledgeable staff. I will limit myself to a few observations relating to the museum’s grand narrative, since it raises questions about the purpose of a national museum and the relationship between commemoration and scholarship. Put another way, what story is considered meaningful, and for whom is it relevant.

Much of the story told is conventional. The war’s outbreak is explained as the product of ever-building pressure that had to be released, a familiar but problematic tale of inevitability. Many will come to see the “big picture”—maps, statistics, and the like that survey the war’s course—or the standard paraphernalia of war—uniforms (usually dress), weapons, machines of death—and they will be satisfied. The museum also offers a glimpse of the soldiers’ and nurses’ “experience” of the Western Front (other fronts are mostly ignored) through mundane artifacts of trench and hospital life that illuminate general hardships and comforts. You can poke your head into small reconstructions of trenches (if you stretch far enough), one of which confronts you with two men fighting to the death with their bare hands.

For me the most haunting display was a reconstructed crater that you can actually stand in, allowing you to be completely surrounded by the horrific damage that could be wrought by one of the shells whose unbelievably massive casings sit behind glass elsewhere. It is an empty, lonely space, made more so by the fact that this crater has blown up half a house, leaving bits of books and furniture, and clothing scattered about and reminding us that the Western Front was also an inhabited front.

Elsewhere visitors can get suggestive pieces of the culture of war back on the “Home Front,” but generally the museum misses a trick by not devoting more space to the well-known social and political changes set in motion on each home front.

This is not incidental but is a product of the museum’s focus, as we can see through the treatment of other aspects of the war that trouble conventional narratives. I was pleased, for example, to see a section devoted to imperial contexts, framed by massive photographs of non-white soldiers. A visitor literally cannot miss that this war was not only fought by white people. I was also delighted to see testimony from a recruit in French Guinea, who noted that his family and friends were troubled when he signed up. But his is a decontextualised voice (Why was he fighting? Why were they confused?) that could be easily mis-read in terms of the “spirit of 1914.” But this misunderstanding could be clarified if the other men in the pictures were allowed to speak, to tell any of a number of stories about their experiences in Europe and the devastating impact of the war on their homes. Their stories could shed light on soldiers’ motivations and notions of camaraderie and exclusion that reach back to the European theatre. Instead, Africans and the African theatre are peripheral.

But, you might say, this is the American national museum, after all. Why spend precious space on Africa if there isn’t even room for the Eastern Front? Well played, hypothetical reader, but let me suggest that the silencing of colonial complications becomes more relevant when we notice that the museum also fails to adequately address questions of race in America. True, there is a picture of W.E.B. Du Bois with a quotation about the need to fight for full democracy at home after fighting for it overseas, but as with the Guinean recruit there is no further contextualization. Who was Du Bois? Why did he feel it important to make this point after the war? Was there any change? A visitor could be forgiven for coming away without understanding how the First World War changed a generation of African-Americans. The shame of it is that there are missed opportunities for presenting this story. Like the photographs of colonial soldiers, the photos of African-American units interspersed without commentary among the photos of white units stand as mute testimony to a disturbed and disturbing landscape of racial politics. 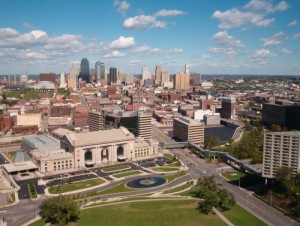 A different perspective from the Liberty Memorial (downtown Kansas City)

This is not merely about black soldiers but rather reflects a broader erasure. Where are the views of soldiers, workers, and reformers whose experiences in trench and factory, street and statehouse informed broader critiques of society in all the warring powers? When our focus is so targeted on the inconceivable hardships and simple comforts of the front, we run the risk of reducing actors with agency to the passive products of mud and gore, focused on the distance between trench and home but unconcerned with the society in between.

This could be incorporated into the existing space, but arguably not without re-thinking what the museum is for. Ultimately I see the museum organised around a unified and unifying narrative of soldierly sacrifice, which jars with scholarly efforts to juxtapose competing stories and highlight the destabilising, even revolutionary consequences of the conflict. But in this regard, the museum fits its setting. Just as the Liberty Memorial was built out of reverence, so too does the museum seek first and foremost to memorialise the men who fought and women who nursed. As a result, the museum risks reinforcing our easy and often self-serving valorisation of “those who serve” and erases a great diversity of motivations, experiences, and responses that raise far more questions than answers.

Jeff Bowersox is Lecturer in German History at University College London.  He is the author of Raising Germans in the Age of Empire: Youth and Colonial Culture, 1871-1914 (Oxford University Press, 2013).

One thought on “Did You Know the American World War I Museum is in Kansas City?”