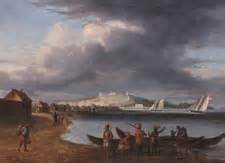 3 thoughts on “Spoils of the War of 1812: Part I: The Importance of Michilimackinac”