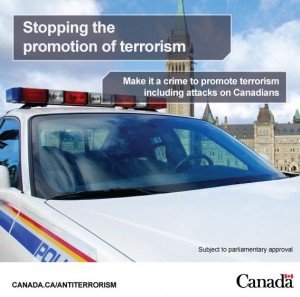 Last month, the Canadian government introduced the Anti-Terror Act, following recent incidents in Ottawa and Quebec that have elevated fears about “violent jihadism” in Canada and its links to global organizations. There has been a lot of discussion about how new proposed powers of online surveillance in the Act will allow security objectives to trump freedom of expression. Yet less has been said about its other parts that relate to regulating mobility and the additional threat they pose to civil liberties. If it passes, the Act will allow federal authorities to get a court order to restrict the movements of people thought to likely carry out future terrorism and will also relax the legal threshold to prevent citizens suspected of being terrorists from boarding a plane.

These sections of the Act highlight how, in times of perceived crisis, government seeks to control mobility within and across its borders in order to protect society and its dominant values and beliefs. Far from isolated, it is only the latest example of a much longer national history of government regulating movement during periods of anxiety like the current one. And in its scope, it risks repeating instances in the past where authorities overreached in attempting to counter perceived threats to security or prevailing norms.

In the modern era, as John Torpey has shown, government acquired a monopoly over the legitimate control of mobility from private and local interests, and with it gained the means to carry out unprecedented surveillance across the territory it administered. How the Canadian government has historically exercised this power shows that free movement has been an uneven, elusive reality for some. While authorities and ordinary Canadians have certainly celebrated and promoted freedom of mobility when it was compatible with dominant ideas and associated with desirable people, they have also undeniably turned a blind eye to these same virtues when it appeared social and cultural norms were under siege at different historical moments.

During these tense periods, authorities have resorted to both tightening movement across the border and containing it within the national territory. Border control measures before the mid-twentieth century were generally motivated by white racism, such as restrictions passed in 1908 that targeted migration from India by prohibiting entry except by continuous journey, which helped provoke the Komagata Maru incident in 1914. After 1921, Canada relied more heavily on the passport to enforce the border, introducing the modern booklet form that year. Since the passport divided people by nationality, authorities now had an increased capacity to exclude different groups of undocumented undesirables without making these decisions appear explicitly racist.

Restrictions inside Canada played out along similar lines. They happened most often during times of widespread domestic fear and unrest, with specific individuals and social groups targeted because their identity cast them apart and their freedom of mobility made them dangerous to the moral and political order. The movements of working-class single women in cities during the Victorian era, unemployed transient men during the Depression, and Japanese-Canadians during the Second World War were all heavily regulated to contain and minimize their respective threats to the wider population for this reason.

The national debate in the 1980s over refugees provides a recent example of this phenomenon, and the dangers it poses for civil liberties. In that case, fast-changing events inside and outside the country, as is the case now, triggered an especially severe government crackdown on the mobility of refugee claimants and other non-nationals thought to be undesirable and risky for Canada.

In the early postwar era, Canada began admitting more refugees, as millions were left displaced worldwide following the Second World War and the beginnings of decolonization. However, officials generally chose refugees who they believed would integrate successfully and not upset the political order in Canada. Franca Iacovetta has observed that refugees with anti-communist views were especially desirable, with hundreds of thousands from Europe and later Asia and Africa handpicked and largely welcomed by Canadians during the early decades of the Cold War.

In 1976, the Trudeau government revised the Immigration Act to create an annual quota for refugees and quietly legalized asylum claims at the border. Refugees with the means could now travel directly to Canada and make a legal claim there instead of waiting to be pre-screened and selected abroad by officials. Many took advantage, and by the mid-1980s thousands of asylum seekers were arriving in Canada each year. The government was unprepared and a huge backlog developed, which grew to more than 50,000 by the late 1980s. The ensuing delays in processing cases gave rejected claimants more time to stay in the country until their appeal.

Immigration officials then began declaring that more new claimants were actually ‘bogus’ refugees–rhetoric that continues to circulate today–who were trying to capitalize on the backlog instead of going through the proper channels. They pointed to some who had no credible asylum case and to others who arrived without any ID documents like a passport. These revelations helped to shine light on real fraud cases, like the thousands of Portuguese nationals who claimed to be persecuted Jehovah’s Witnesses in 1986, but they also planted the idea in the minds of many Canadians that most refugee claimants were duplicitous.

Things got worse after the arrival of several boatloads of Sikh and Tamil migrants, many without passports, in 1986 and 1987. Reacting to their arrival, in June 1987 the Globe and Mail recommended stopping the free movement of all persons coming to Canada, unless they were from the “United States, Japan, Australia and most of Western Europe”. This idea and similar ones were concerned with reducing bogus asylum claims, but they were also shaped by racist ideas about who was most guilty of making one. The boat migrants and the majority of other asylum seekers in the 1980s were from Asia, Africa, the Middle East and South America, places that had been historically prejudiced by exclusionary immigration policies that favoured Europeans. Official tolerance of racial and cultural diversity had begun to shift after the passage of liberal immigration reforms in 1967 and the introduction of official multiculturalism in 1971, but the steady rise of asylum claims and growing reports of bogus refugees heightened public anxieties about the pace of cultural and racial change and survival of dominant values and traditions in late twentieth century Canada.

The Mulroney government then fed public hysteria by declaring a national emergency and cracking down on the free movement of asylum seekers and others coming to Canada from suspect areas of the world. Along with continuing to progressively slap visas on countries accused of supplying large numbers of bogus applicants, leaving only the United States and most of Europe excluded by the late 1980s, it quickly introduced two heavy-handed bills concerning refugees. Taking effect in January 1989, they stripped rejected asylum seekers of appeal rights and deported them faster, and authorized longer detentions of non-citizens labeled as security threats.

Collectively, these measures hurt different groups of people, particularly those with a strong asylum case who now struggled to convince officials they deserved entry because they could not get visas before fleeing dangerous homelands. And their passage in 1989 led Lorne Waldman, an immigration lawyer and refugee rights advocate, to say that “for the first time in many years, we will turn genuine refugees away from our shores.” Bona fide refugees were thus disproportionately caught up in the government’s new push to restrict the movement of bogus claimants and play to concerns about unfamiliar newcomers.

With the Anti-Terror Act, new restrictions on movement are again being used to simultaneously fan public fears and provide reassurance that people who pose a threat to prevailing norms will be tracked, contained and punished. Opposing terrorism in all its forms and responding to real threats by aggressively limiting where and how these people can move is, of course, a necessary and laudable action if executed responsibly. At the same time, however, we must reflect on other instances in the past, not limited to the ones discussed here, where authorities went too far in trying to protect the many by stigmatizing the few. As it seeks to tighten controls on movement through this new legislation, the Canadian government must avoid overreaching and capturing innocent people alongside genuine terrorists in its widening security net.

Bret Edwards is a PhD Candidate in History at the University of Toronto. He works on the local and national remaking of Canadian airports in the early decades of global jet travel. He occasionally pops up on Twitter at @BretJEdwards.