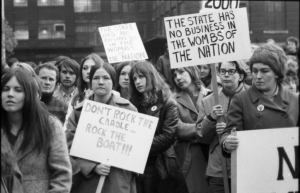 [Editors Note: This is the first of a series of five posts on the Abortion Caravan that will be running this month.]

By Christabelle Sethna and Shannon Stettner

On April 27, 1970, members of the Vancouver Women’s Caucus (VWC) set off on a journey to Ottawa in an “Abortion Caravan” to protest the new abortion law. Under Prime Minister Pierre Trudeau, the Liberal government passed an Omnibus Bill in 1969 that reformed the Criminal Code, decriminalizing contraception and legalizing consensual homosexual sex as well as abortion. Legal abortion was now possible only when a doctor referred a pregnant woman to a Therapeutic Abortion Committee (TAC) made up of three to five doctors in an accredited hospital. The TAC determined on a case-by-case basis whether or not the abortion was necessary to save the life or health of a pregnant woman. Although intended to prevent illegal abortion and its potential negative health consequences for women, the new law was unevenly applied and created backlogs and delays. Nascent women’s liberation groups like the VWC denounced it as restrictive to women in general and unfair to poor women in particular and began organizing around repealing the abortion law. The Ottawa Citizen quoted VWC member Dawn Carrell Hemingway as saying: “The only way we can get abortion removed from the Criminal Code is not by letters to the government or pressure through channels.  The only way is if large numbers of women come together and do something.  Numbers and actions are more important than presenting briefs.”[1]

The lead vehicle in the Caravan carried a coffin filled with coat hangers to represent the deaths of women from illegal abortion. It made twelve stops on the way to Ottawa to gain publicity and followers, and arrived on Parliament Hill on the symbolically chosen Mother’s Day weekend of 9 May. Women from other parts of the country joined with them in protest. The women gathered first in the Railway Committee meeting room to hear from a number of speakers, including New Democrat Member of Parliament Grace MacInnis, Dr. Henry Morgentaler, an increasingly prominent abortion provider, and anti-poverty activist Doris Power. Following their speeches, a group of approximately 300 women broke off from the main demonstration and marched upon the Prime Minister’s residence. There they laid the coffin on his doorstep. On Monday, May 11, women engaged in two concurrent protests. Outside the House of Commons, one group marched around the Centennial Flame, while a smaller group of other women inside the House began shouting for “free abortion on demand.” The women, some of whom had chained themselves to seats in the visitors’ galleries, were removed from the House by security guards and escorted outside. As a result of these bold actions, discontent with the abortion law received national media attention.

Before 2004, the most exhaustive source for information on the Abortion Caravan was Frances Wasserlein’s unpublished MA thesis (1990). A number of published works on abortion in Canada and on Canadian feminism referenced the Caravan only briefly – in as little as a single sentence or as much as a page or two. Yet, over past decade several historians and activists have contributed to a deeper understanding of the Abortion Caravan. One consequence of this renewed attention is that the Caravan has become one of the better-known events in the history of second wave feminism and abortion rights activism, garnering much media attention. There are podcasts featuring Caravan participants and newspaper stories showcasing their reflections. Countless web pages are devoted to the Caravan’s place in the history of the pro-choice movement in Canada while more recently, the Canadian anti-abortion movement has endeavoured to appropriate the Abortion Caravan.

Over the next month, we will feature a number of blog posts that investigate different aspects of the Caravan. Later today, Shannon Stettner examines the Caravan in the context of widespread opposition to the Vietnam War, highlighting the ways in which the women negotiated their various anti-war and pro-choice activism. Next Tuesday, Christabelle Sethna uncovers the little-known surveillance of the Caravan by the RCMP and its place in Cold War politics. The following week, Karissa Patton probes the Caravan’s ongoing relevance to abortion politics in regard to the current day anti-abortion movement and a final post will take a critical look at the successes and limitations of the Caravan.

Christabelle Sethna is an associate professor in the Institute for Feminist and Gender Studies at the University of Ottawa. Shannon Stettner is a Post-Doctoral Visitor in the Department of Political Science at York University.

Ann Thomson, Winning Choice on Abortion: How British Columbian and Canadian Feminists Won the Battles of the 1970s and 1980s. Trafford: Victoria, 2004.

2 thoughts on “The Women Are Coming; The Abortion Caravan of 1970”