We are crossposting this essay as part of our partnership with the new early Canadian history blog Borealia. 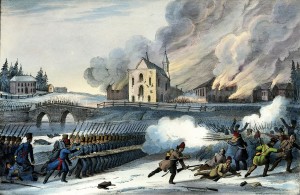 In the months since the 19 October election, Canadians – from Justin Trudeau to church groups preparing for Syrian refugees – are reasserting one of the most recognizable tropes about Canada, that the country is an international leader in humanitarian aid and an advocate for multilateral and conciliatory approaches to international challenges. In mid-November the Globe and Mail ran an editorial referencing the Geneva Convention of 1949 and urging Canadians to reaffirm the country’s commitment to international law and humanitarian traditions; “as a leading member of the international community, [Canada] must do its part to uphold the letter and spirit of humanitarian law,” including acting as a leader in calling for an independent commission to investigate the American bombing of a hospital in Kunduz, Afghanistan in October. Unarticulated but central to the editorial’s argument was that ideological differences need to be set aside in the interests of international justice; the three authors were Joe Clark (former Progressive Conservative Prime Minister), Ed Broadbent (former NDP leader), and Irwin Cotler (former Liberal MP and Minister of Justice). The editorial also reaffirmed that Canadians and Americans have substantively different understandings about how to respond to violence both internationally and domestically, about when it is appropriate for a state to use violence, and what the boundaries to that violence should be. Indeed, the decision of the Liberal government to withdraw Canadian fighter jets from bombing ISIS contributed to the Minister of Defence Harjit Sajjan not receiving an invitation from the US Secretary of Defense, Ashton Carter, to a multilateral meeting to discuss coalition strategies to end the threats of ISIS.

As historians of pre-Confederation Canada and the United States, we have committed a great deal of our intellectual energies, individually and collaboratively, to understanding why the two countries have such profoundly different understandings about the role of violence in defining the character of social order, from localities to the international community. We know that the frequent contrast between Canada as peace-loving and the United States as more violent can too often mask episodes of violence in Canadian history. As well, we know that Canadian history is often dismissed as irrelevant to understanding the modern world because its historical narrative is not intensely shaped and punctuated by episodes of large-scale violence. Yet as Jerry Bannister reminds us, colonialism is intrinsically violent, involving at the very least the traumatic displacement of indigenous peoples. Involving Indigenous leaders in relocating their nations, as the British did with Thayendanegea (Joseph Brant) and the Mohawks after the American Revolution, does not assuage the suffering of the ordeal. And as the recent report from the Truth and Reconciliation Commission on Residential Schools tells us, cultural genocide through education is a profoundly disruptive form of social violence that echoes down the generations in Indigenous communities, hampering if not handicapping their ability to build strong nations. [Read More…]